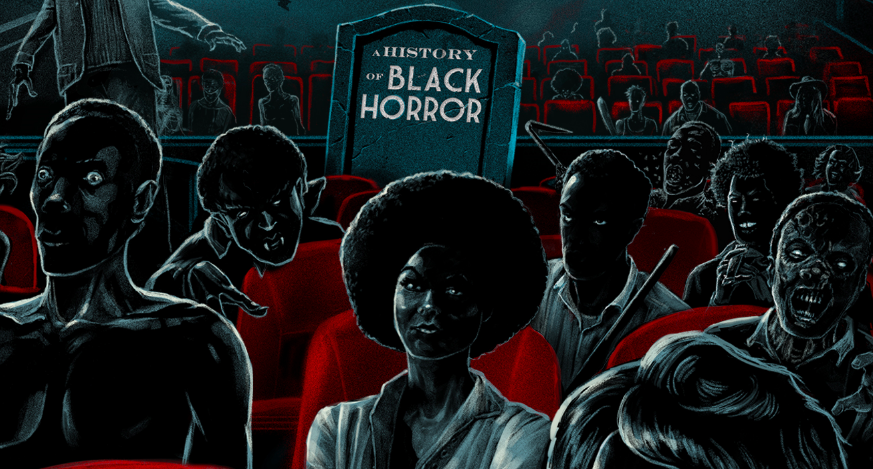 February is the intersection of Black History Month as well as Women in Horror Month, so it’s the perfect time for Xavier Burgin’s Horror Noire: A History of Black Horror, now streaming at Shudder. Adapted from Robin R. Means Coleman’s study Horror Noire: Blacks in American Horror Films from 1890s to Present, the documentary features a series of in-depth interviews with Coleman and other horror scholars as well as iconic Black horror filmmakers to present an insightful overview of Blacks in horror history. And it is exceptional.

Going all the way back to what Black folks consider the first American horror movie — the KKK-approved Birth of a Nation — and exploring the shifting media landscapes since then, Horror Noire takes us on a socio-cultural journey not just into Black horror films, but the violent American history that inspires much of it. In so many ways, the Black American experience is in itself a real-life horror movie — from slavery to mass incarceration to police brutality — and Horror Noire explores these overlaps with insightful precision.

First, Blacks in horror movies represented a social and cultural threat, in particular, Black men posing as a unique danger to white women. Examples like the original King Kong serve as a metaphor for the perceived inhuman lust of Black men and racist stereotype of their inherent violence. From the 30s to 40s Blacks were featured in horror movies as the animalistic monster, slaves, buffoons, and “savage” tribal people as foils to white heroes. But by the 1950s and 1960s, Blacks disappeared from screens and were replaced with caricature monsters. Through interviews with horror scholars Coleman, Tananarive Due, and Ashlee Blackwell (all producers of this excellent documentary as well) we see how the monsters in films such as The Creature From the Black Lagoon are in many ways racialized as dangerous Black men, and how pervasive this phenomenon was during the years of the Civil Rights struggle. “We’ve always loved horror,” Due says in Horror Noire. “But horror hasn’t always loved us.”

A turning point for Black agency in horror movies is George Romero’s The Night of the Living Dead, released in 1968. Even 40 years later, this film is ahead of its time in terms of Black representation. And even now the ending is real, honest, and as chilling as ever, especially in light of so many recent cases of police brutality against Blacks and the rise of Trump-inspired racially-motivated violence. The most terrifying imagery in Horror Noire is the archival footage and photographs of white rage enacted on Black bodies. Black American history is horror.

Come the 1970s and the rise of the so-called blaxploitation genre, new space for different Black stories emerged. They weren’t always good stories, but they allowed for Black folks to have a range of roles on screen, not just the monster. Because Black horror has always done its part to reflect its audiences and their experiences as a hugely marginalized and demonized group in America, Black horror and America’s racist history are inextricably and terribly linked. In Blacula, for example, the count has a plan to end the trans-Atlantic slave trade and makes a case for the practice’s utter inhumanity. And this, coming from a vampire. Blacula’s sequel Scream Blacula Scream tackles the issue of Black representation on the screen when newly-turned vampire Justin Carter (Don Mitchell) looks into the mirror, can’t see his reflection, and shouts, “A man has to be able to see his own face!” Horror Noire masterfully analyses and puts into a decisive framework some of the most important moments of Black horror history. It’s painful at times, powerful, and never more relevant to our current political moment.

From exploring, poking fun at, and dismantling tropes such as First To Die, The Magical Negro, Faithful Servant, Sacrificial Negro, and Mammy Figure, to also detailing some of the more horrific real-life Black horror history moments such as the Tuskegee Experiments, Horror Noire is a comprehensive study of how horror fiction reflects life in America as a Black person. Through dozens of interviews with Black horror directors, writers, producers, actors, and academics Horror Noire takes us on a deep dive into this vital part of American film history.

And the best part of Horror Noire is how the cinema landscape for Black horror is shifting in many positive directions. From the 90s additions of Candyman, Tales from the Hood, Eve’s Bayou, Demon Knight to the horror boom in the 2000s with that allowed for more self-reflexivity within the genre, Black faces have been more and more the center stage in horror productions. Culminating in several important installments of the Black horror genre, including Attack the Block, The Girl with all the Gifts, and of course the film that changed everything: Get Out.

Seeing all of this put into historic context in Horror Noire was truly remarkable. And in spite of its very intense themes, still manages to have a sense of humor. Horror Noire isn’t just a documentary, it is a snapshot of Black American history through the lens of horror. It is an indispensable installment in film history. Horror Noire is required viewing not just for horror fans, but for anyone interested in American history, politics, culture, and filmmaking.