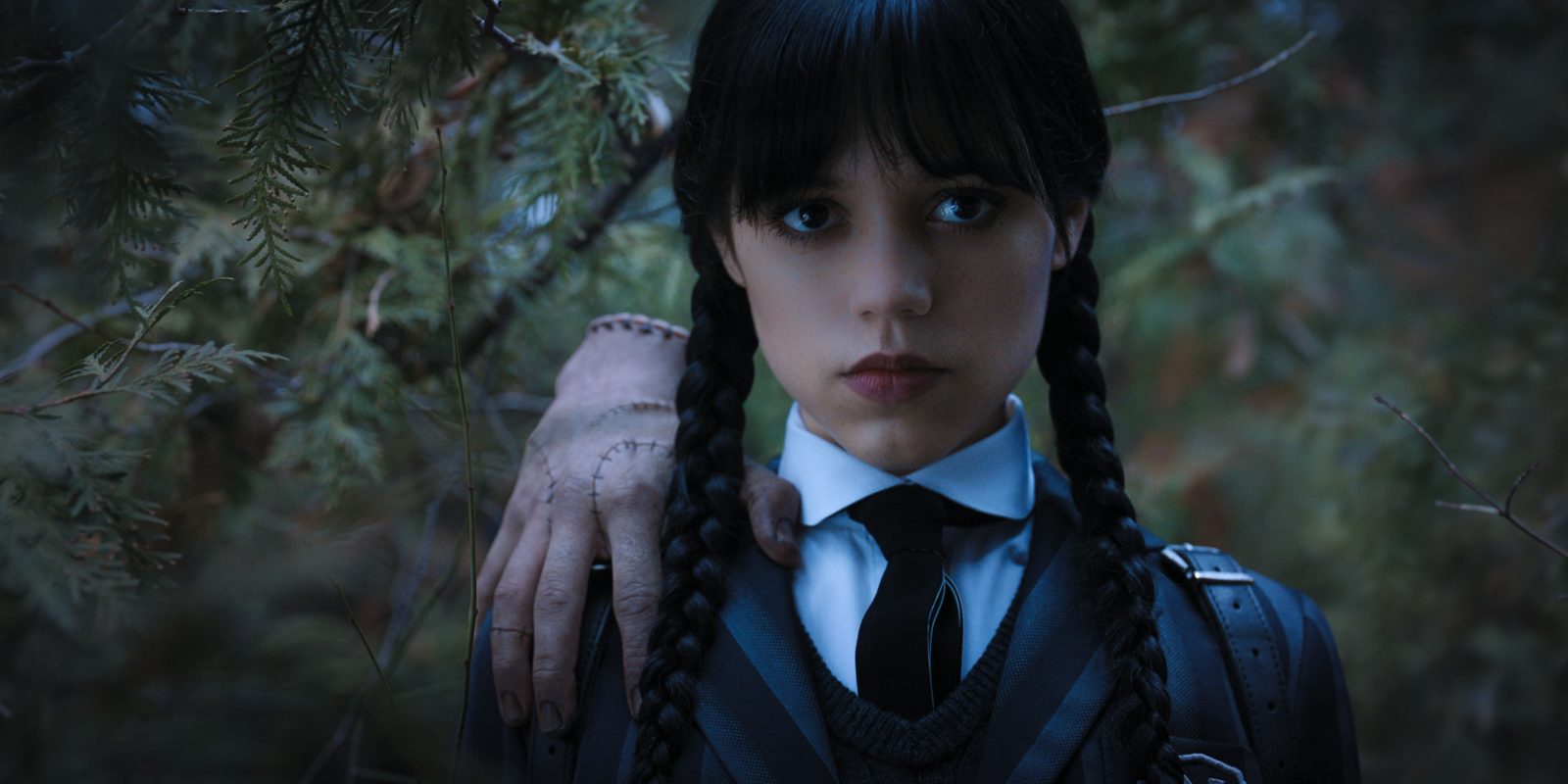 The extraordinary character of Wednesday Addams has been around since 1938, popularized in the 1960s sitcom, and cemented as an icon in the 1990s Barry Sonnenfeld (The Addams Family, Addams Family Values) movies. Even though we’re often weary of reboots, remakes, and reimaginings, this year’s Addams spin-off from creators Alfred Gough and Miles Millar (Smallville) along with director/executive producer Tim Burton (Miss Peregrine’s Home for Peculiar Children) is something original and wholly its own.

The series begins with Wednesday Addams (Jenna Ortega) getting revenge on some school jocks who bullied Pugsley (Isaac Ordonez), something only she’s allowed to do. Since, believe it or not, dropping piranhas into the pool will get you expelled, the troublemaker is then sent off to Nevermore Academy, a New England boarding school for societal outcasts, run by Principal Larissa Weems (Gwendoline Christie).

Alumni include the famous Edgar Allan Poe, but more importantly, Morticia (Catherine Zeta-Jones) and Gomez Addams (Luis Guzmán), who met there as teenagers and fell intensely in love. Off-campus, there’s the little town of Jericho, which thrives because of Nevermore Academy. However, that doesn’t mean they enjoy the company of weirdos. Sheriff Galpin (Jamie McShane) makes that clear right away even though his son Tyler (Hunter Doohan) finds them interesting, especially the enigmatic new girl with a dark sense of humor.

In the series, Wednesday is an aspiring novelist, accomplished cellist, master archer, competitive fencer, and an all-around genius. But while navigating her new reality, she’s also trying to get a handle on her burgeoning psychic abilities that are activated at seemingly random moments. They come in handy, though, when people start dying and she has to unravel an intriguing mystery with monsters, secret societies, magic, and murder.

For the first time, we actually see Wednesday’s Latinx heritage represented. Gomez has always been the only character played/voiced by Latino actors. What makes this modernized Wednesday Addams perfect is Jenna Ortega. She’s already proven that she’s a bonafide scream queen, and this role just solidifies her as one of the most talented actors working today. With a character known and loved for being dry, emotionless, and only speaking in a deadpan inflection, that doesn’t leave much room for an actual arc. But Ortega has the ability to communicate so much through her captivating eyes, giving just the right amount of emotion, often with just a subtle smirk.

In an interview with the OG ’90s Wednesday Christina Ricci (who also plays “normie” teacher Ms. Marilyn Thornhill in the series), Ortega discussed the challenge of Burton wanting her to remain expressionless, saying, “He wanted a flat surface, which I understand. It’s funny and great except when you’re trying to move a plot along, and Wednesday is in every scene.” The creators knew the actress was “visually perfect” but she’s also intuitive and really understands the character.

The great thing about Wednesday is that she’s a teenager already secure in herself and has been that way since childhood. She goes through changes in terms of her surroundings, which do give her a chance to grow, but she’s not going on a romantic or emotional journey. She’s put into situations we haven’t seen her in before like sharing a room with someone blonde, bright, and bubbly. However, this story isn’t about her learning to like color.

Wednesday’s roommate Enid Sinclair (Emma Myers) is a ball of sunshine and such a unique character, always positive and energized in a way that most of the students aren’t. Instead of being either a preppy optimist or an adventurous rebel, Enid is both. She gives Wednesday the Mean Girls-eque tour of the school explaining the various cliques — werewolves, vampires, and other miscellaneous creatures. The gorgeous and intimidating Bianca Barclay (Joy Sunday) is the queen bee (or siren, rather) and former girlfriend of Xavier Thorpe (Percy Hynes White), an artsy semi-jock who has his own special power.

Wednesday is confident, assertive, ruthlessly sarcastic, and always says what she’s thinking, but she’s also socially awkward. She reluctantly makes friends, some more genuine than others. Eugene Ottinger (Moosa Mostafa), nerdy and funny like 1993’s Addams Family Values Joel Glicker (David Krumholtz), bonds with Wednesday over science and sort of acts like a stand-in for Pugsley. The series makes Thing (Victor Teodor Dorobantu) a full-fledged character instead of a prop or pet. He’s sent by the Addamses to spy on Wednesday at school but ends up being her sleuthing sidekick. She also gets a visit from Uncle Fester, played by Fred Armisen, who I never would’ve thought of for Fester, but his comedic talent and ability to slip into any kind of character make him the perfect choice.

Burton also brought along famously frequent, award-winning collaborator costume designer Colleen Atwood (Fantastic Beasts: The Secrets of Dumbledore) who unsurprisingly did a wonderful job. The school uniforms and classic Addams family attire are incredible, but Wednesday’s wardrobe alone is fabulous. She stays in her trademark palette of black and white, and when we first see her, she’s wearing her crisp collared dress. But Atwood also put her in pants and hoodies, showing just how modern and effortlessly stylish this Wednesday is compared to her predecessors. The dress she wears to a school dance is stunning.

With Wednesday, Gough and Millar have crafted a dark, whimsical coming-of-age tale that stays true to the Wednesday Addams we know but gives her more layers and explores her identity separate from her family. The brilliant Latinx lead Jenna Ortega and the diverse cast make this world more grounded in reality with some much-needed representation. Tim Burton’s signature disorienting, gothic aesthetic gives the series an overall heightened visual style that’s incredibly detailed and immersive. It’s the filmmaker’s first foray into television and hopefully not his last.

Wednesday begins streaming on, of course, Wednesday, November 23, 2022, on Netflix.