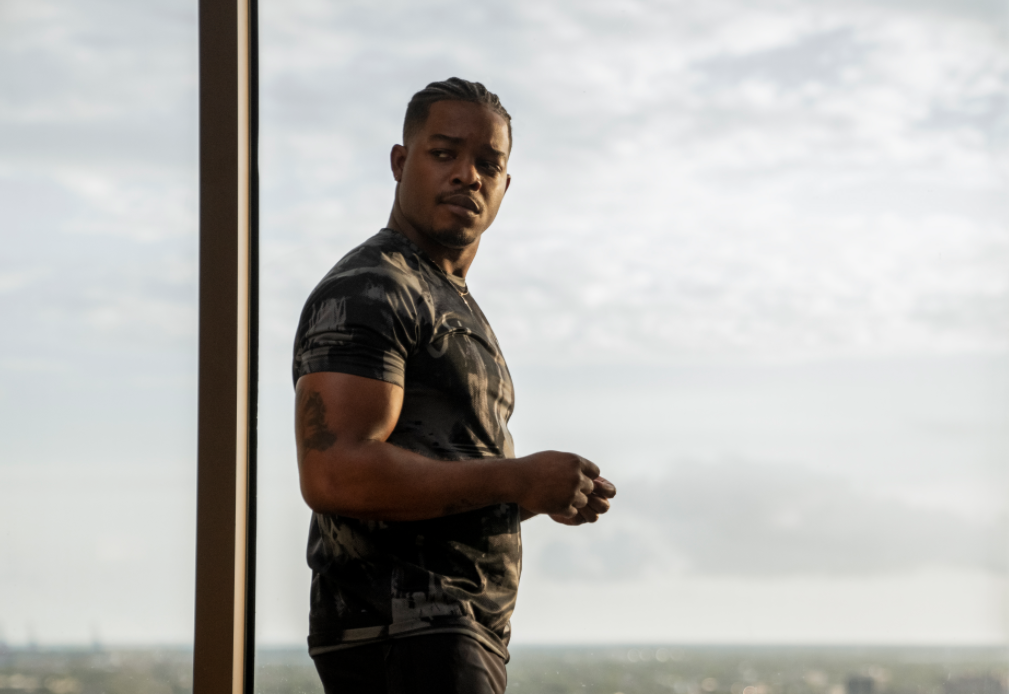 College football is a multi-billion dollar industry fueled by the free labor of young men. National Champions is a magnificently nuanced examination of the influence of systemic toxic capitalism and greed in college football.

James’ captivating performance as LeMarcus is another example of this actor’s boundless range. He is a virtuoso. From their first moment on screen, the audience is rooting for LeMarcus and Emmett to succeed. LeMarcus’ passion for using the power of collective action to build an equitable future is a perfect reflection of how young people in the 21st century are unapologetically working to disrupt injustice.

One of my many favorite moments of the film is a montage of LeMarcus and Emmett bouncing from hotel room to hotel room, secretly meeting with players from both teams to convince them to join the strike. The scene’s rhythm is magical. LeMarcus is like a 21st-century football-playing Harriet Tubman inspiring his teammates to do the impossible. I was so inspired I jumped off my couch fist in the air, screaming yes! and ready to join the strike. Thank goodness I was watching a screener at home.

The script of writer Adam Mervis (21 Bridges) is fantastic, and Ric Roman Waugh’s direction is spot on. Mervis’ script sifts through the layers of complexity while clearly showing the ripple effect of a possible player’s strike. Each word is expertly placed, every single moment of this film has a reason. Just when I thought, “Oh my god, why are we focusing on this side plot? What does it have to do with the main storyline?”  Later on, BOOM, the reason would appear, and the story advanced in ways I could never have dreamed of predicting—what an incredible ride.

National Champions examines how sports are one of the few places in the American caste system where people can jump caste purely based on their abilities. Being a part of a “legacy” family won’t get you in an elite college football team if you can’t throw the ball. In football, people from all walks of life are randomly placed on the same team with a singular goal, to win. LeMarcus recognizes the power of his temporary privilege. He is driven by the fact that a small percentage of the young men breaking their bodies out on the football field will make it to the NFL, and an even smaller percentage will acquire the wealth and power that elite football stars enjoy.

Football teams require multi-racial, intergenerational relationships, the stakes are high, and the power structure is clear. National Champions does not shy away from how race is lived. I loved that “race” is not written as a binary in this film. The film considers the intricacy of race, class, location to power, and relationships. Coach James Lazor (J.K. Simmons) is a father figure who molds boys into men for profit. I felt as if I was in the room observing Coach Lazor’s conversations with his interracial coaching team. The dialogue sounds like how people actually talk to one another. Simmons disappears into the role and unravels deliciously as he balances multiple professional and personal catastrophes throughout the movie.

When attorney Katherine Poe (Uzo Aduba) appears on screen, she is the only woman in a room full of mostly white men strategizing on maintaining power over their players. She doesn’t say a word, yet her presence steals the scene. Katherine works for the NCAA and the conference heads as a “fixer,” putting her brilliance to work towards breaking the strike. At first, I was so angry with the writer for pitting the dark-skinned Black woman against the young Black man as she represents the system. I thought, “See, this is how white writers pit Black women against Black men like crabs in a barrel.” I put those thoughts away and expected to just enjoy Uzo’s brilliant acting beyond the script, but it happened again. Adam Mervis slips in a variation to Katherine’s character. We learn the “why” behind Katherine’s actions, which justifies her actions throughout the film, creating a fascinating dilemma that’s not easy to judge.

There are no simple solutions and no one’s hands are clean, but these student-athletes don’t allow apathy to prevent them from taking action. Every single member of this all-star ensemble is flawless. National Champions is based on a play written by Adam Mervis in 2019. Mervis converted the play into this film version. The team began pre-production in January 2021 and started filming just four months later. Mervis was a high school football star whose career was cut short by an injury. Many of the core members of the cast — Uzo Aduba, Timothy Olyphant (Eliott Schmidt), and Andrew Bachelor (Taylor Sheridan) — are former student-athletes. Kristin Chenoweth (Bailey Lazor) and Tim Blake Nelson (Roger Cummings) grew up in Oklahoma around high-profile football boosters. NFL stars Malcolm Jenkins and Russell Wilson play themselves along with other athletes in the film. This level of expertise gives National Champions authenticity.  Even the setting is perfect. The majority of the movie is filmed in hotel rooms in New Orleans.

After years of student-athletes advocating for equity, on July 1, 2021, the NCAA started a temporary policy for athletes to legally monetize their own names, images, and likenesses.

National Champions is only in theaters December 10, 2021.

Stephan James Opens Up About His Latest Film ‘National Champions’