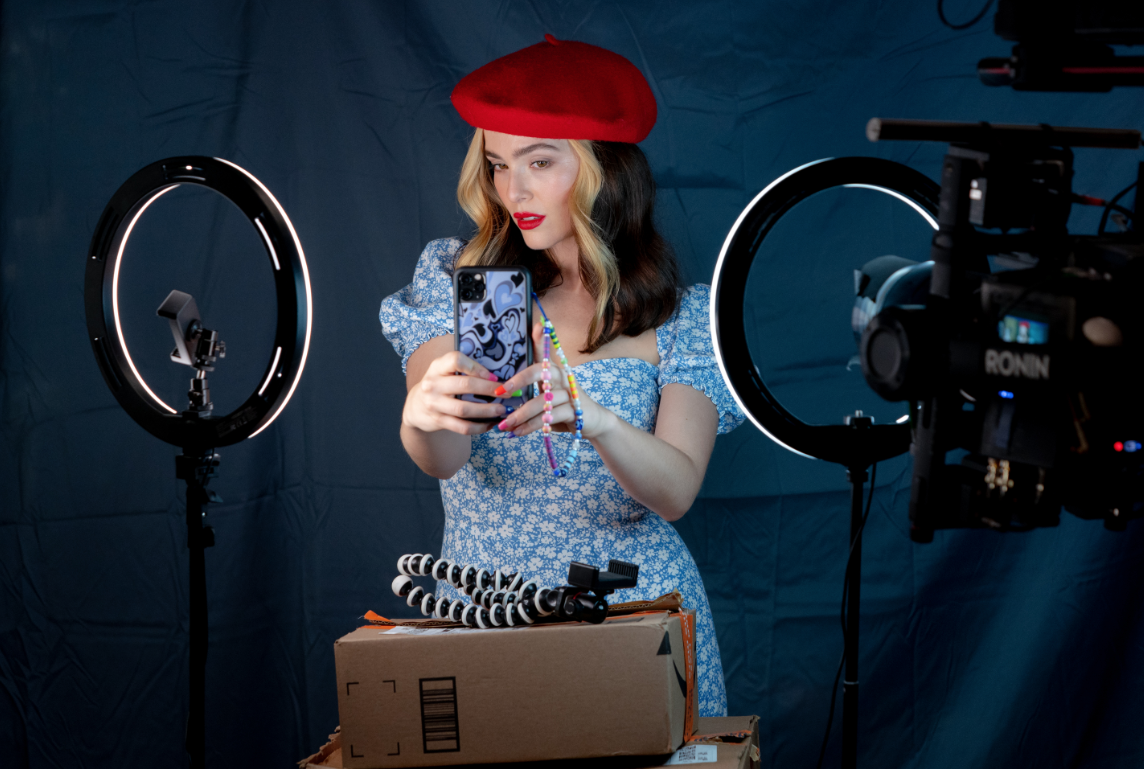 Not Okay is the story of Danni Sanders (Zoey Deutsch), a young woman traveling through life one Instagram timeline at a time. She’s completely immersed herself in millennial culture, from her neon colored nail tips to her two toned hair and extreme wedge flip flops. Danni is pretty much a walking cliche — and that may be the way she likes it.

Cliches have goals and ambitions, two things Danni understands that she should probably have, but would much rather trade in for the ultimate pedestal of notoriety. Danni wants to be famous. She wants to trend, and she wants to do it on her terms. She strives to be socially conscious, but she can’t seem to stop navel gazing to get out of her own way.

She works at a culture website//content mine called Depravity as a photo editor by day, and wannabe writer by… day. She’s not very good at her job. When we open on the show, Danni is reviewing her latest piece with her boss Susan (played by the fantastic Negin Farsad). It’s a  piece where Danni bemoans that she missed 9/11 due to being on a cruise with her parents. She didn’t even know someone who died!

Of course Susan dismisses her, but it’s clear that Danni thinks Susan is just being a hater and she brushes it off. It’s her inability to feel shame along with her tenacity and innate desire to be something more and also her extreme crush on the human trash bag that is weed boi Colin (Dylan O’Brien) that make Danni a terrible person. She is not okay. She reminds us of the worst part of ourselves, and that may be why despite all of her flaws, she’s relatable and gains our sympathy.

Not Okay is Quinn Shepard’s sophomore film, following up her debut Blame. Where Blame exposed the psychology of girls, sexuality, and jealousy, Not Okay takes it a step further and explores these themes while adding in the idea of exposure. Danni aspires to live her life online, seemingly because she doesn’t have a real one, but if she can look like she does that will be enough. She’s not felled by her ambition but instead her greed. She’s the epitome of “no one ever gives me anything, so I’ll deny myself nothing.”

It’s an interesting concept. Danni’s relatability is based entirely on how terrible we think ourselves to be. Before we even get to the crux of the film of Danni faking a trip to Paris and claiming to be a victim of a terrorist attack, Danni never shies away from her true colors. She’s terrible, yes, but she’s bold, she’s resourceful, and she makes fraud look good. These are things to be admired. You know that if she can just get pointed in the right direction, she could actually be a productive member of society. The problem is that she will never go in that direction. But it’s a general hope for humanity that disallows some audience members from giving up on her entirely.

While I enjoyed the first half immensely, I was ready to just write it off as a smart comedy. I settled in. Then Rowan (Mia Isaac) came on the screen, and the movie transformed. It was like I tripped and slipped into a thoughtful satire of zeitgeist horror. The shift in tone was so subtle, but that’s what made it so impactful. When you see Danni through Rowan’s eyes, you don’t see a girl who is just trying to make do. You see a woman who is overly ambitious and too stubborn to stop when she’s in over her head. Slowly the point of the film stops being Danni and becomes Mia, and the movie is made better for it.

Technically speaking, the film also excels. Shephard has an intelligent eye and you can quickly see her making her mark that will define her films as “Quinn Shephard” films. She uses the scenery of New York well and does a great job of exploring class dynamics in an accessible way. The cast is all-around stellar. In addition to Deutsch and O’Brien, Karan Soni, Embeth Davidtz, and her now fiance Nadia Alexander among other notable actors round them out. Shephard also employed lovable influencers to play a part, including the one-man press machine Reece Feldman.

It’s important to note that the movie isn’t anti-social media; it’s against corruption and losing your sense of self. Danni’s crime isn’t having an Instagram, it’s valuing her online persona (and Kendall Jenner) over real people. Shephard’s script is cunning and shows that Danni’s culpability is not wholly her fault. Everyone contributes, not just her parents, not just the gay bowling league that suddenly accepts her, not just Colin, but everyone who interacts with her deception, positively or negatively.

Ultimately, Not Okay is a film worthy of multiple watches. Zoey Deutsh is a joy and plays the character so adeptly you don’t feel bad if you hate Danni. It doesn’t feel like a mistake, only inevitable. Everyone really brings their A game and every minute is well curated, making the film meaningful as a piece of art. Mia Isaac is a star, and she’ll be one to watch as she strengthens her filmography. Shephard is such a pro, she pulled off a cameo without it being obnoxious. It’s truly a feat.