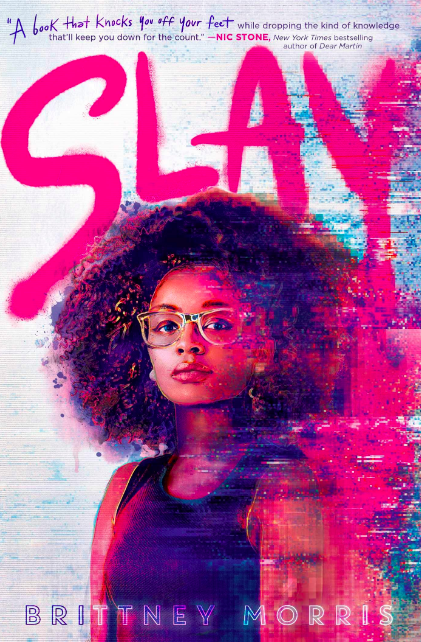 SLAY by Brittney Morris is the epitome of Black excellence that meets geek culture.

Here at Black Girl Nerds, I probably don’t need to explain what drove me to this book.

Tired of the racism and harassment that comes with being a Black person in an MMORPG, tech-savvy teen Kiera Johnson sets out to create her own virtual world. SLAY is where character selections feature shades for all brown bodies, and the Eurocentrism of castle-and-dragon type fantasies give way to African-inspired scenery and gameplay for all the Nubian kings and queens in need of some escapism. Players battle using a card-game style that features everything from the ever-empowering Black Girl Magic and Representation cards, to relatable shoutout cards like McDonald’s Money and That One Auntie’s Potato Salad.

Known virtually as Emerald, goddess and game dev of the SLAY kingdom, Kiera is revered by its players. SLAY is the one place she feels most at home to revel in all that is great about her Blackness — which makes it all the more sad that she can’t share it with anyone in her real life. Caught between parents who don’t allow AAVE in their home, white friends who are the living embodiment of privilege, and a sister who has too much to say about everything, Kiera weaves a web of white lies to keep them all in the dark about her game and how much time she spends on it.

Unfortunately, this also includes her boyfriend Malcolm, who is all Black power, all the time. In his world, there is no rest or reprieve from the never-ending work of Black advancement against the white man’s social barriers. Needless to say, this does not leave room for video games. His views on the uselessness of “distractions” like SLAY complicates Kiera’s visions of a future spent attending an HBCU, getting married, and raising the world’s wokest babies together.

The only person who understands Kiera’s love and devotion to SLAY is her most trusted game mod, Cicada, a fellow queen who lives in a completely different time zone and knows nothing about Kiera’s IRL troubles.

SLAY is an incredibly raw and real depiction of modern Black identity struggles. Morris artfully reveals what it’s like to discover, explore, and redefine your Blackness while constantly surrounded by not only a white majority, but the opinions and rhetoric of other Black people who all seem to think they know the “right” way to be Black. As a teen at an overwhelmingly white school, the interpersonal racism Kiera faces is painfully familiar. Yet the structural and systemic racism that threatens the very existence of her beloved creation is something else entirely.

When a young Black kid is murdered over an in-game dispute, it takes every ounce of energy Kiera has to keep the barrage of news outlets from discovering her identity as the game’s developer. With her proudest accomplishment on the line and everything it means for the half-a-million players across the world, this 17-year-old is forced to contend with both the piercing guilt and blame for the boy’s murder and the threat of an impending discrimination lawsuit for being “racist against white people.”

I haven’t had a novel take me so thoroughly and deeply through a character’s emotions since Tomi Adeyemi swept in and snatched my soul. I felt Kiera’s fear, anxiety, and rage through every microaggression — from her white friends who can’t seem to wrap their heads around why Black gamers need their own space to news pundits calling the game an inherently violent meeting place for thugs and gangbangers. My heartbeat was not steady while reading this book, y’all.

Even deeper than that, Morris explores the complex layers of racist trolling, respectability politics, and misogynoir. In fact, sexism plays an interesting role in this narrative that proves to be more pervasive than meets the eye. It’s a subtle reminder that the line Kiera walks is that of a Black girl specifically, and with it comes a brand of discrimination that’s all its own.

What I loved most about the story was the way it wove in multiple perspectives from characters of different ages/generations, nationalities, genders, sexualities, etc., to demonstrate the elements of Blackness that connect us all across the diaspora. Despite being set in the United States, SLAY is surprisingly and refreshingly global in its considerations. Throughout the story we learn bits and pieces about what drives Black people around the world into Kiera’s virtual reality. Even the cards and game features are often the result of collaborative community efforts that bring in everything from Louisiana hot sauce to West African fufu.

I know I’ve said it before, but YA lit is really doing something these days. If you think you’re too grown to read it, you need to think again. SLAY creates a dialogue that takes you well beyond the basics of “this is racism” and into the nitty-gritty debates of culture and virtue within the Black community on an international scale. Ultimately though, it is honest and true in its refusal to paint any singular Black narrative as the correct one. SLAY is a testament to the beauty and diasporic diversity of all Black bodies. With this book, Morris says to us readers exactly what SLAY says to its players: “I see you, and you are excellent.”