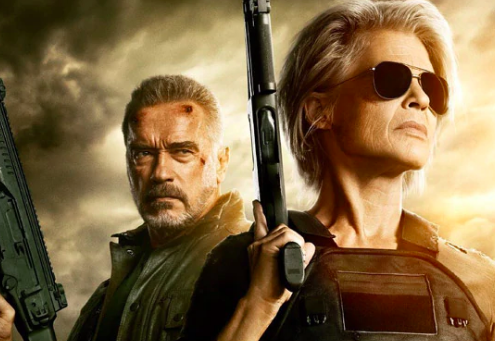 The Terminator franchise has seen a lot of misses when it comes to rebooting its storylines.

Well, now we are finally getting a hit since the disaster that was Terminator: Genisys (2015). The nostalgia for the ’90s continues with the release of Terminator: Dark Fate, which is supposed to be a direct sequel to the 1991 hit Terminator 2: Judgment Day. Producer James Cameron has come back and left us with the trilogy we deserved.

Terminator: Dark Fate drops us in Mexico City where a new Terminator, played by Gabriel Luna, has been sent back in time to hunt and kill a young woman named Dani Ramos, played by Natalia Reyes. Dani is perceivably normal. She is the caretaker of her household, waiting patiently on her father and younger brother. She is the hardest worker in the room, punching in at a local auto factory. Also arriving from the future is Grace, an enhanced human, played by Mackenzie Davis with a military background. While surviving is one thing, killing the unkillable Terminator takes more than what Dani and Grace can do. They realize they need extra help as they attempt to stay alive. Cue Sarah Connor, played by Linda Hamilton, and T-800 Terminator, played by Arnold Schwarzenegger.

The film stays true to the Terminator legacy. It has the same story structure with similar plot points. It’s a how-to manual for making Terminator films. Killer machine, check. Fate of the world in the hands of one person, check. Someone sent from the future to protect said person, check. While the story may be the same in some ways, the action has amped up for the better. Director Tim Miller, known for Deadpool, really knows how to make the blasts and chases mean something. For viewers, every sequence is an edge-of-your-seat experience. It’s engaging, albeit a little farfetched at times, but that’s the magic of a great science-fiction blockbuster — the willing suspension of disbelief. From the beginning opening attack to the heartfelt end, your adrenaline is going. The visual effects are very impressive. (Perfect, absolutely not.)

The cool thing about Terminator: Dark Fate is the variety of uses it presents for technology and use of machines. Because our world is so consumed with technology, that portion of the film really pulls you in. The theme of what technology can do depends on the people who use it. For one, there is this government power creating Terminators for war, and it backfires. Another example is people being replaced by automation in an automobile factory. Dani and her brother are at risk of losing their jobs because of machines. There’s also the health components of the machines. Grace is enhanced. Her reflexes, strength, and health are all supported with mechanical technology inside. It saved her when she was close to death. Another version of technology is seen in the use of companionship with the T-800 model. It makes you ask the question: Is technology really the bad guy here? It’s a question that is so relevant to 2019, which is why this film deserves to come out now.

Another highlight of this film is the trio of women that take on the Terminator. They are brilliant, raw, and not worried about their looks while doing it. “These aren’t your pretty Charlie’s Angels,” said Hamilton in a press junket. She’s absolutely right. These are the tomboys, the military-driven, the tough female protagonists we need more of. They seem unremarkable at first but prove to be people you don’t want to mess with. The relationship between the three women is never catty or vindictive. It’s nothing but supportive and protecting of one another. They are helping one another. This film has not one but three bad-ass chicks following their own rules.

It was fantastic to see Linda Hamilton in her iconic role again. What could have used some work was her dialogue. She was constantly saying witty, two-word remarks. Sarah Connor is the strong, silent type, and in giving her words that were less than, she became a caricature. The three ladies, Dani, Grace, and Sarah, are all tough mentally and physically. They are all flawed characters that we need more of on-screen. The acting by Reyes, Davis, and Hamilton really solidified the characters for me. It’s been years since Hamilton got into the mind of Sarah Connor, but it was like she never left. Reyes and Davis do a great job in complementing the great actor.

What’s nice about Terminator: Dark Fate is you don’t have to rewatch the original first two. The film catches you up to speed in a clear and concise way. The film will dazzle you with Mission Impossible moves, but keeps and honors the chapters that came before it. It’s a fun one. It has action and heart — two things that make for great entertainment.

Interviews with the cast of ‘Terminator: Dark Fate’