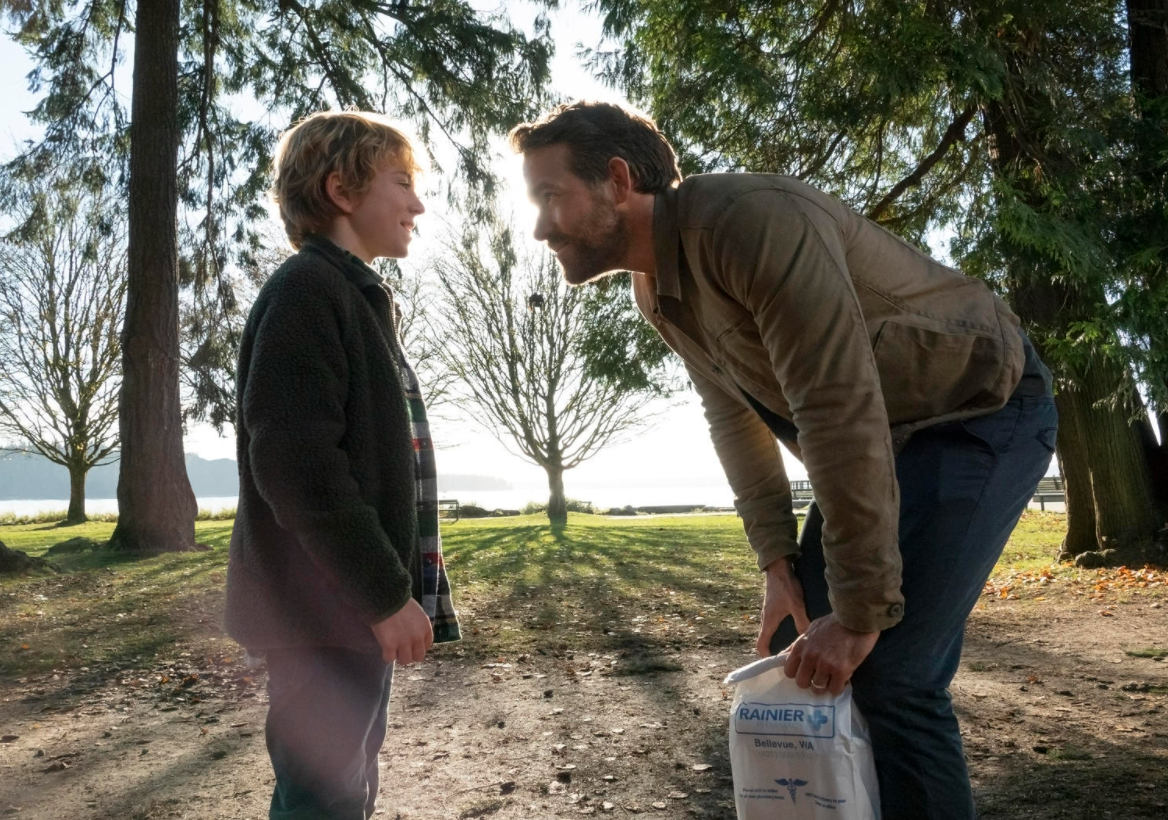 Movies and TV allow for an escape and a moment to experience and feel things we might not get to feel in the real world. It is a suspension of disbelief to the highest power. The Adam Project is the latest original film from Netflix, and it tells a heartwarming, fun, high-energy, sci-fi story that plays with the imagination and allows us to have a good time.

Netflix has continuously captured our hearts and imaginations with its original films and series. They have recently upped the ante by securing top names to lead and support their content.

The Adam Project follows Adam (Ryan Reynolds, Deadpool), a pilot who travels to the past from the year 2050. He teams up with his younger self (Walker Scobell) and his late father Louis (Mark Ruffalo, The Avengers) to destroy time travel. Jumping through time, Big Adam and Young Adam try to fix the future. Through their adventures both Adams must sort through their “current” issues that stem from their mom Ellie (Jennifer Garner, 13 Going on 30), and wife Laura (Zoe Saldana, Guardians of the Galaxy). Standing in their way is Louis’ business partner Maya Sorian (Catherine Keener, Get Out), who wants time travel to exist for her financial gain. The film is directed by Shawn Levy (Free Guy) and written by Jonathan Tropper (Banshee), T.S Nowlin (Maze Runner), Jennifer Flackett (Journey to the Center of the Earth), and Mark Levin (Big Mouth).

Let’s talk about this cast. It’s amazing. The chemistry between everyone is fun to watch. It’s basically if the characters Jenna Rink and Matt Flamhaff, who grew up at the end of 13 Going on 30, had a kid named Adam. Matt’s nerdiness then led him into the world of physics and teaching where he discovered the equation for time travel. Of course, these are pure musings of a fan of Garner and Ruffalo in 13 Going on 30. It was great to see them reunite for The Adam Project. It only took 18 years for us to see them back together, but it was worth the wait. There’s a line in the film where Ruffalo tells Garner, “I love you.” Garner replies with a simple, “I know. I’m very lovable.” Break out the Razzles for this one.

As enamored as I was with Garner and Ruffalo, it was Walker Scobell as a 12-year-old version of Adam that left an impression. Ryan Reynolds has a very specific tone and lyrical style to his speech, whether he’s talking in a film or real life. Scobell did a fantastic job landing the comedy, timing, language, and overall demeanor of Reynolds, making it believable that these two are the same person. For his feature film debut, Scobell is an instant fan fave.

The Adam Project is a fun movie that has great names attached. But, to be frank, it wouldn’t be as great without those A-listers. This film wouldn’t have had the same impact with a group of unknown actors. It’s so fast-paced there’s no time to develop a sense of emotion for these characters. Do we love them, do we hate them? Whose side are we on? We immediately root for Big Adam because it’s Ryan Reynolds. We don’t question Adam’s mission, even though he’s already broken laws, because it’s Ryan Reynolds. Director Shawn Levy knew what he wanted because he got a cast that delivers on all fronts. Zoe Saldana is a badass as Laura. Laura reminded me a lot of Gamora. They are both action heroines who don’t mess around and have no trouble getting their hands dirty. It’s no wonder Saldana was cast in the role. It’s perfect for her.

BGN loves a good sci-fi flick. The Adam Project knows its place and even mentions a few of its predecessors in the process. It’s fun to watch a movie that talks about the rules of time travel based on other movies and just dismiss it. The Adam Project wants to be its own thing. The film mentions cult classics Back to the Future and Terminator. The film is also reminiscent of Guardians of the Galaxy, which is a plus. It also has video game references, of course, which is fantastic for us nerds and fans of the Free Guy director.

Overall, The Adam Project is fun, wildly entertaining, funny, and heartwarming. While there are some minor plot holes and inconsistencies, they can be overlooked given the story, jokes, cast, and overall themes of the story. There are moments of a pure heart. There are moments of over-the-top action sequences. There are even moments of pure chaos with inappropriate jokes for no reason. It’s great! It’s a film viewers will want to watch over and over again just to have some fun and take a break from the world.

The Adam Project will premiere on Netflix Friday, March 11, 2022.