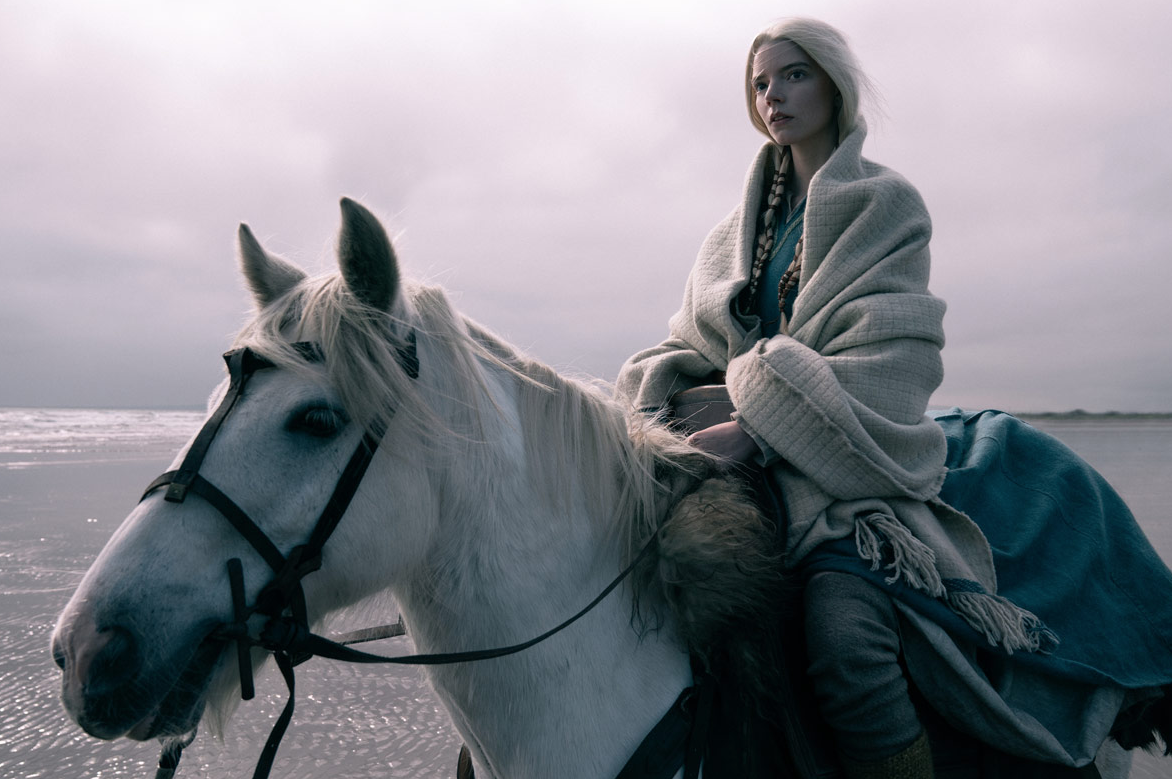 I’ve said it before, and I’ll say it again, I love a good period piece. The new film from Focus Features is surprising. I love being surprised at the movies because it doesn’t happen often. This film is a wild good time, even with the dark, violent, and bloody scenes. It’s been a minute since we had something like it. It’s bold, gritty, and just downright awesome. The Northman is a film to see in theaters. None of this I’m going to wait to see until it’s streaming.

No, this is an epic story that deserves a big screen. It’s a film lover’s dream. I know nothing of Norse mythology other than what I get from shows like Vikings and Loki and films like How to Train Your Dragon and Thor. But here, we have a different type of Viking. A stripped-down, unromanticized version that highlights the antihero.

The Northman is written and directed by visionary director Robert Eggers, known for The Witch and The Lighthouse. With the help of the Icelandic novelist and poet, Sjón, Eggers’ goal was to make the most historically accurate and grounding Viking film. He succeeded. The film follows Prince Amleth, who at a young age sees his father, King Aurvandil (Ethan Hawke, Moon Knight), brutally murdered and his mother, Queen Gudrún (Nicole Kidman, Big Little Lies) kidnapped by his uncle, Fjölnir (Claes Bang, The Girl in the Spider’s Web).

Fleeing his island and future kingdom, Amleth vows revenge. Two decades later, Amleth (Alexander Skarsgård, True Blood) is a Viking berserker raiding Slavic villages, where a seeress (Björk) reminds him of his vow: I will avenge you father, I will save you, mother, I will kill you Fjölnir.

As a stowaway on a slave ship to Iceland, Amleth infiltrates his uncle’s farm with the help of Olga (Anya Taylor Joy, Last Night in Soho), an enslaved Slavic woman, and sets out to murder his uncle. The film also features Willem Dafoe (Spider-Man: No Way Home) as King Aurvandil’s court jester and seer.

The first thing you notice about this film is its cast. It’s a strong ensemble of massive talent. Who better to lead this cast than Sweden-born Skarsgård who grew up around Viking lore. If you remember anything about the Sookie Stackhouse novels or HBO series True Blood, you know Skarsgård played 1,000-year-old vampire Eric Northman, a young man who in his human life was a Viking. It’s truly a full-circle moment.

The portrayal of Amleth in The Northman is a strong performance. He becomes a character the audience can’t fully love nor hate. The antihero of a generation. It’s the strong physicality and the facial expressions that anchor this character in your heart, despite his many flaws. You feel bad for him, but you also fear him.

After Eggers’ The Witch in 2015, Anya-Taylor Joy quickly became a global sensation. She draws from but evolves her character in The Witch to portray Olga of the Birch Forest. It’s a character that highlights the courage and strength of Viking women. Kidman in her role as Queen is startling, a welcomed surprise. On the surface she is portraying a soft-spoken, devoted woman, trying to survive. What we see on screen is a force to be reckoned with. It’s a role that truly highlights the range that Kidman is capable of.

This film will resonate with cinephiles, bookworms, and history buffs alike because it draws from some of the best cinematic and literature influences: Hamlet, Beowulf, 300, King Arthur, Braveheart, Macbeth, Game of Thrones, Gladiator, and even The Lion King. Yet, it’s its own epic film. The Northman has bewildering artistic direction and stunning cinematography from Jarin Blaschke (The Lighthouse).

The visual use of the elements – water, ice, fire, earth – are all captured and brought to life in a way that truly enhances the story. The cinematography captures the physical world, the spiritual world, and the inner world of the Viking mind in a way that immerses the audience further into the story, the culture, and the characters. Beautiful to look at, full and complex in tradition and culture. The entire production captures the period majestically. The visuals enhance the story.

The fight sequences are incredible. Meticulously choreographed and shot with purpose. The battles are bloody and intense. It’s not overly stylized. We aren’t glorifying death. The final battle scene had a strange resemblance to the fight scene between Obi-Wan and Anakin Skywalker in Revenge of the Sith. It is this thought that took me out of the film for a moment. But, Skarsgård was able to pull me right back in with his animal-like ferocity. Channeling everything in that final moment, the final sequence sticks with you at the end. It’s powerful.

It’s an adventure. The attention to detail is impressive. The pacing has a rocky start, but once you’re going and the momentum takes over it’s powerful and a feast for the senses. Historical dramas can be hard, but the team behind The Northman accomplished it. Performance, setting, look, and sound come together to create an engaging fantasy that will wow. It’s an artistic look at history that I wouldn’t mind seeing more of. With a distinct aesthetic, The Northman succeeds where other epic stories like 2007s Beowulf and 2006s 300 fail.