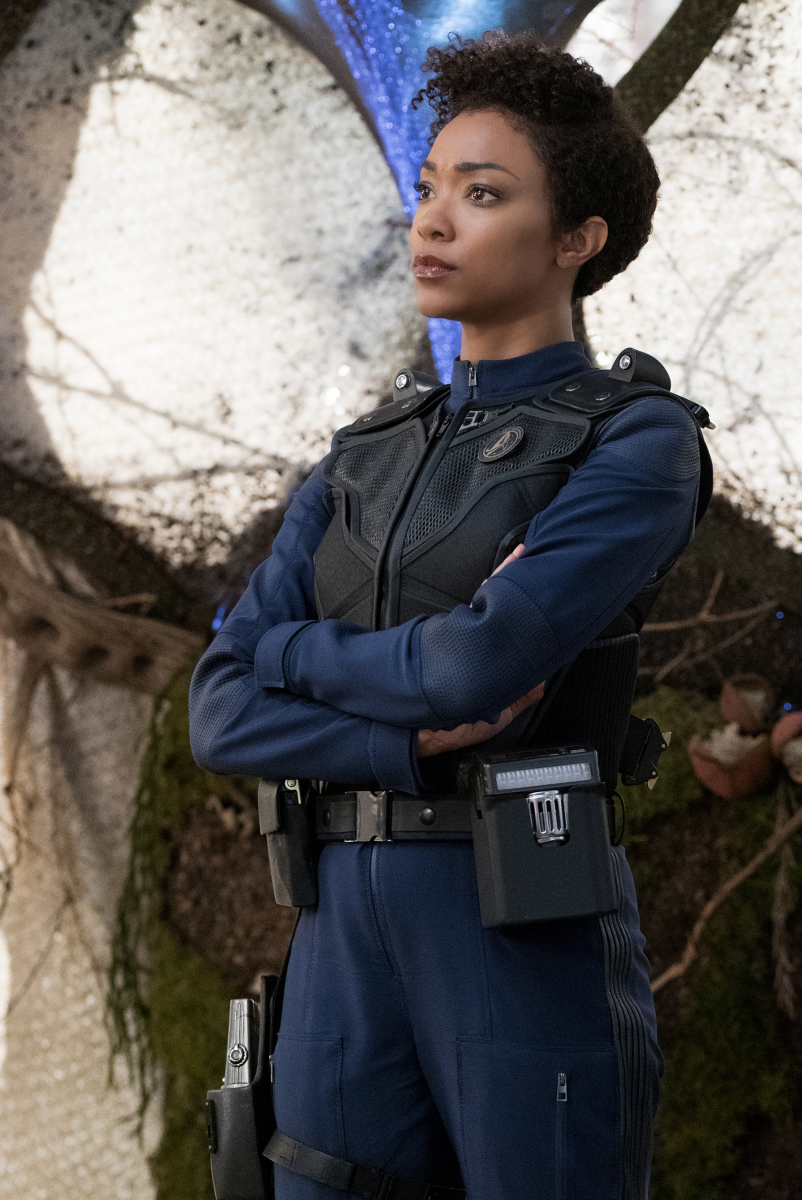 Episode 8 of Star Trek: Discovery, “Si Vis Pacem, Para Bellum,” is not my favorite. But, we did find out more about who some of these characters are, what they want, and what they are willing to do to get it. At least I think we did. Rumors in Trek verse at this point are flying pretty crazy.

What’s up with Burnham and Tyler?

Looks like these two are officially a couple, but while last week I was excited about the chemistry between them, this week, it seemed forced. Would Burnham really be stealing kisses on an away mission, the outcome of which could mean victory or defeat for the Federation? Saru has made first contact with a lifeform completely different from any the Federation has encountered before. I’m pretty sure Burnham, a scientist, would be a hell of a lot more interested in that than having a conversation with Tyler about what happens to the two of them after the war.

What’s up with Saru?

This week we discovered that Saru, being Kelpein, is a lot stronger and faster than his human crewmates. He’s also very good at communicating with alien species. So, when he, Burnham, and Tyler beam down to Pahvo to use the planet’s “music” to help defeat the Klingon cloaking device (confusing as hell, BTW) and run into its inhabitants, Saru communes with them to tell them the Federation’s intent. But he actually forms an emotional bond with the Pahvans, who he fears will be drawn into the war and harmed, so he becomes frantic to stop the Federation. Ultimately Burnham is forced to stun him when he attacks her as she tries to carry out the mission.

Later, in sickbay, Saru tells Burnham that it wasn’t the Pahvans, but he himself, who made him attack her, because for the first time in his life he felt no fear, and he didn’t want to give that up.

This plotline brings up an issue I’ve had with Saru all along. How is he even in Starfleet? Especially on a warship? Wouldn’t that be torture for a member of his species, not to mention a security risk?

What’s up with Stamets and Tilly?

After Discovery’s latest battle, Stamets comes out of the jump disoriented and calls Tilly, “Captain.” Later, when Tilly drills him about his confusion, he confesses that he’s been waking from the jumps confused about where he is for a moment. She says he should talk to his partner, Dr. Culber, but Stamets refuses to hurt Culber by putting him in such a difficult situation, possibly forcing him to choose between reporting it or violating Starfleet regulations.

Okay, I love Stamets and Culber, but they shouldn’t be serving together. ST: TOS is the only Star Trek series that really tried to recognize the basic military standard that family members shouldn’t serve together in the same unit. Sure, it makes for great drama, but as much as I loved ST: TNG, I never bought into the idea that families of crew members should live on a starship that could, potentially, be engaged in battle or another dangerous situation. It’s just nuts.

Note: The writers clearly love Tilly and Stamets because they give them the majority of the best lines in of the series so far, but I hope they spread the love a bit more. Also, it was very cool that Tilly’s earlier declaration of intent to Burnham that she will be a captain someday is alluded to by Stamets when he calls her “Captain.” That wasn’t confusion, but possibly time travel, I’d bet.

What’s up with Klingons, Kol and L’Rell?

Kol of Kor may be a petaQ, but he’s pretty smart. By bribing leaders of the other houses with the cloaking technology, he continues to gain power and is turning the tide of the war towards a Klingon victory. Yes, even he knows that if you have a secret weapon, the more guys on your side that have it, the better your chances of beating the other guys. Meanwhile, the Federation still only has one spore-drive capable ship. Sigh

L’Rell is a puzzle. This week she tries to convince Kol of her worth to him as a great interrogator, offering to question the surprisingly still alive Admiral Cornwell. Instead, once alone with Cornwell, she tells her she wants to defect and that she will help her escape in return for asylum. But the two are seen by Kol on the way to L’Rell’s ship and they stage a fight in which Cornwell is (possibly) killed. While hiding Cornwell, L’Rell discovers her friends murdered and vows to avenge their deaths by killing Kol. But Kol finally locks her away after ascertaining that she’s been lying to him.

There are now more questions about L’Rell than answers, for sure. What did she do with Voq? Is she a lone wolf, or does she have the mysterious “matriarchs” behind her still? Does she want to defect or was it just a way to get to the Discovery? Did she actually kill Cornwell?

What’s up with the Pahvans?

The Pahvans live in harmony with their planet and nature. After contact with Saru, Burnham, and Tyler, they decide to help end the conflict between the Klingons and the Federation. They send an invitation to Kol’s Klingon ship. (How did they find the ship?) As Kol’s ship drops out of warp and de-cloaks, the Discovery gets ready to defend the well-meaning Pahvans.

Similar Trek episodes have ended with superior beings teaching us a lesson and sending us on our way. But I have a feeling that this darker Trek series may end badly for the Pahvans.

I hate to give this episode of Star Trek: Discovery such a low rating, but as a stand-alone, it doesn’t rate higher. Hopefully next week it will all come together.