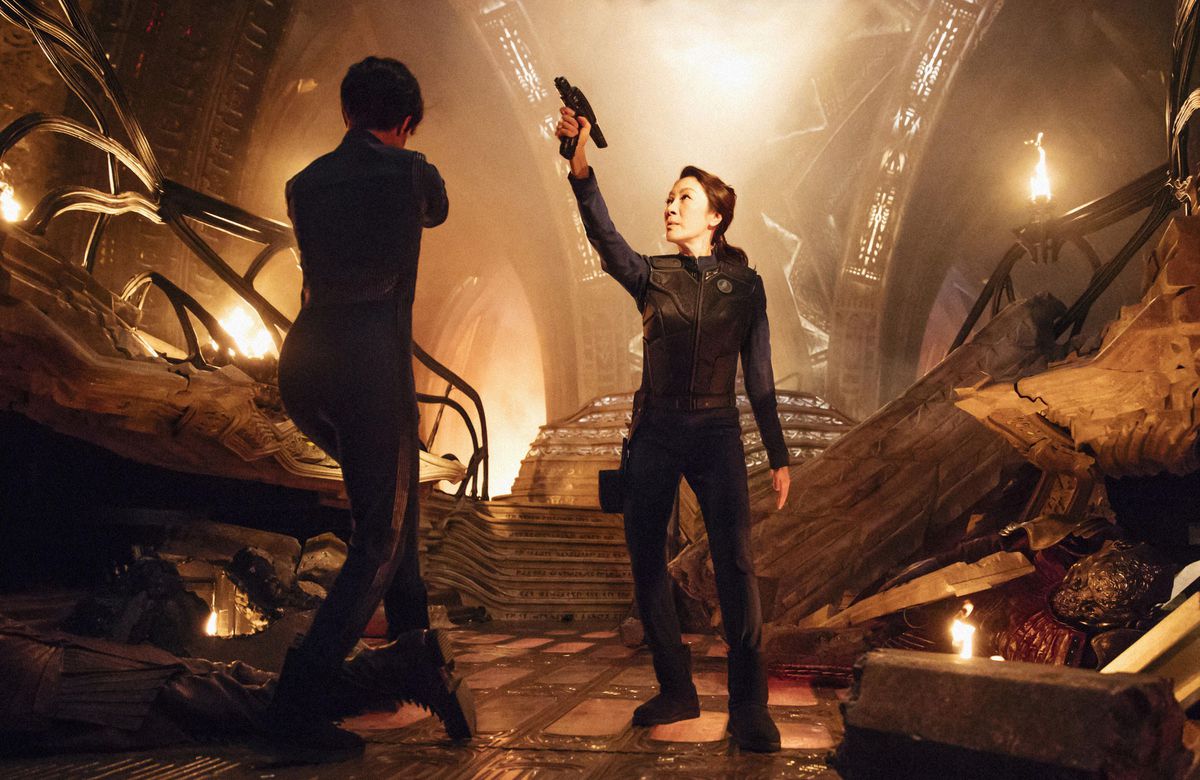 Star Trek: Discovery episode two, “Battle of the Binary Stars” begins exactly at the terrible place we last left the USS Shenzhou, facing not one, but several Klingon ships, with many more dropping out of warp.  But before we get to see how this turns out (hint: badly), a flashback takes us to the moment Burnham, accompanied by Sarek, meets Georgiou for the first time, aboard the Shenzhou.

I hate to use the word cute to describe Burnham’s manner in this scene, but it is…cute. Sonequa Martin-Green perfectly captures the injured air of the self-described Vulcan who is put out because she’s being sent to live among humans. She communicates, subtly, all the other emotions the character is working to squelch.  Fear, anger, sadness, and loneliness, all of which she masks behind her slightly superior air towards Georgiou as she struggles to maintain her stiff upper lip (but is that bottom lip pouting slightly?).  It’s clear she is not mommy’s, but daddy’s girl.  This point made even clearer when he turns to leave, he gives her a slight smile, whispering “Behave”, which makes me fall in love with this Sarek, as much as I loved the original.

Of course, Georgiou wins her over with her warmth, humor, and commanding air, and between this moment and the one we saw between the two of them at the start of the first episode, the producers quickly establish us how close the two are.  This makes the next scene that much harder to believe, because apparently, where Georgiou once saw a promising young captain-to-be, and a friend, she now sees a crazed mutineer.

Sure, there’s not a lot of time to analyze what is happening, and Georgiou arguably makes the best call based on years of experience.  Still, wouldn’t she have given Burnham a little more benefit of the doubt, considering their friendship, her experience with Vulcans, AND the Vulcans’ experience with Klingons?  But maybe not shooting her is that benefit of the doubt.  Anyway, she relieves Burnham of duty and sends her to the brig, choosing to deal with the situation later.

Checking back in with the Klingons, we get a little more backstory on T’Kuvma (played with a great deal of gravitas by Chris Obi) and his mission, in the form of an explanation to the assembled holographic representations of the Klingon leaders present in their respective ships. I call this section of the episode “How Tkuvma Got His Honor Back” which, as usual for Klingons, involves avenging a dead father and some Klingon kid bullies.  Oh, and Kahless because, uh, Kahless,

His desire to unite the Klingon houses once again and take revenge on the Federation isn’t impressing the chiefs much, until Federation backup for the Shenzhou arrives in the form of more starships, proving to them that the “we come in peace” thing is the lie that T’Kuvma says it is.  So the other Klingon leaders are basically like, “Cool. It’s on” and begin to kick Federation ass.

Burnham is missing the action and the computer won’t enlighten her since she’s a prisoner.  Then one of her friends, injured and confused, shows up lost and looking for sick bay.  He fills her in on what’s going on right before he becomes the first “red shirt” fatality of this series when the Shenzhou is fired on by the Klingons and most of the section he’s standing in gets blown into space.

Burnham is unconscious but safe, at least as long as the shields remain up outside her cell, but the rest of the brig is gone.  We find out at this point that Sarek is able to communicate with her even though he is light-years away because, as he tells her, he placed part of his katra in her mind when she was a child (something he did or, rather, will do, with Picard years later) after a bombing on Vulcan leaves her near death.  Now, he reaches out to remind her that she’s smart and tough enough (something he admits he might not have done enough in her life) to logic her way out of her current dilemma, which he never says he blames her for, by the way. Strengthened by his faith in her, she proceeds to try to figure out how to out-logic the computer into helping her escape the brig and certain death.

As the battle wages on, the Shenzhou and the other Federation ships are taking a beating when hope arrives in the form of the fashionably late USS Europa and her oh-so-tough–and-Star Fleet-y Admiral Brett Anderson (seriously Brett Anderson? It might as well be Admiral Ultimate Whiteguy).

The smug just rolls off his hologram (which appears on the bridge of the Shenzhou), in waves as he hails the Klingons, letting them know he represents the authority of the ENTIRE Federation and that he wants to negotiate a cease-fire.  Of course, he just plays himself by putting a very clear target on his forehead.  Militarily-speaking, there’s a reason why you don’t salute a superior officer in the field in a combat situation and why you wear subdued rank.

The next bit is some great television.  T’Kuvma seems awed that he has the attention of the Federation in the person of this impressive Admiral and strokes his ego a bit by saying so, then agreeing to send an envoy to the Europa. Anderson (how did he get to be an Admiral?) is fooled into dropping shields.  While the Admiral is basking in this diplomatic victory, his hologram starts to go wonky and he looks around asking what the hell that was.  To tell you the truth, it is pretty disturbing to watch the Admiral’s hologram get more and more degraded and frantic because you can’t see what’s happening.

When the Shenzhou finally gets the image on the viewscreen, it is incredible.  The Europa is being rammed by an invisible, at first, Klingon ship, which slowly begins to uncloak as it slices the vessel in half.  This is one of the many times during the show that “cinematic” is the only word that applies.  It should be seen on a very big screen.  Still, the impact, pardon the pun, is substantial.

The Europa and crew are doubly-doomed as other Klingon vessels close in for the kill.  But the Europa’s final act of defiance is to self-destruct and take out a few Klingon ships in the process.

T’Kuvma’s cold-blooded maneuver, as well as the cloaking device, convince the remaining Klingon leaders that he just might be the second coming of Kahless and they warp away to return to their clans and begin the war.  T’Kuvma chooses to stay to gather and prepare the Klingon dead for entombment.

In the meantime, Burnham finally finds the right Q&A combo to find a hole in the computer’s programming and escape, a little maneuver that reminds us we are definitely in the Star Trek universe. This involves exposing herself to the vacuum of space for a few seconds, which she takes in stride. She’s freaking fearless.

As Georgiou and Saru formulate a plan to take out T’Kuvma with the remaining weaponry they have, Burnham appears on the bridge in time to talk the captain down from killing the Klingon. Georgiou seems relived Burnham is still alive and doesn’t shoot her on sight, though I’m not sure why Saru doesn’t.

Burnham reminds Georgiou that she’ll turn T’Kuvma into a martyr for the Empire so instead, they should capture him and use him as a bargaining chip.  There’s a lot going on within Georgiou in this scene.  On the one hand she’s happy that Burnham is alive, on the other, she’s the cause of all this… isn’t she? Or is she now thinking about what might have happened had she listened to Burnham?

After some back and forth between the two of them about whether it was Burnham’s Vulcan training or human emotions that lead her to mutiny (not sure this is relevant at the moment, but I love watching Yeoh act so I’m not complaining), they stumble on a plan to both destroy the Klingon vessel and capture T’Kuvma.

The plan goes awry and, though the Klingon ship itself is disabled, both T’Kuvma and Georgiou end up dead, crushing what little is left of Burnham’s spirit.  This breaks my heart because though Georgiou will, at least presumably, appear in flashbacks throughout the series, this is the last we will see of Obi who did a fantastic job act through that bitch of a prosthetic.  T’kuvma’s final moments on screen, dying as his most loyal soldier kneels next to him, are powerful.

Our last glimpse of the Shenzhou shows lifeboat escape pods flying out and away from the dead ship and we next see Burnham in front of a courts martial pleading guilty to mutiny, among other lesser crimes. The panel members’ faces are all in shadow and the setting is overly theatrical.  Honestly, I think it took away from the power of the previous scenes.

Her statement in her own defense is not so much that as proof that she’s not likely to ever forgive herself for causing the death of her friend and for causing a war.  Too hard on herself, really.  She was trying to keep all that from happening.
At this point, I had only one question: Um, where the hell is Sarek? In fact, where are the Vulcans in general?  If they know how to deal with the Klingons and she was following the, granted unauthorized, advice, why isn’t this being taken into account?  I hope the producers address this at some point.

Anyway, the court obliges her desire for punishment by stripping her of rank and sentencing her to life in prison, which is where the episode ends, as does the best series opener I’ve ever seen for a Star Trek series.

I think this show really balances the needs of the few hardcore fans against the needs of many possible new fans (see what I did there?).  I’m definitely in it for the long haul.  I just hope the subscription model doesn’t scare off so many people that the show dies prematurely.  It is great drama and deserves an audience.

DaVette See lives in Inglewood, CA with her husband, Rob, her mother, and her seven (yikes) kitties. She has a BA in English and Theater and a Law degree. When not writing, reporting and video editing for BGN, she operates Running Lady Studios and producing animated shorts. She was a geek before geek was chic. She loves books, plays, movies, and more than anything, she loves telling stories.