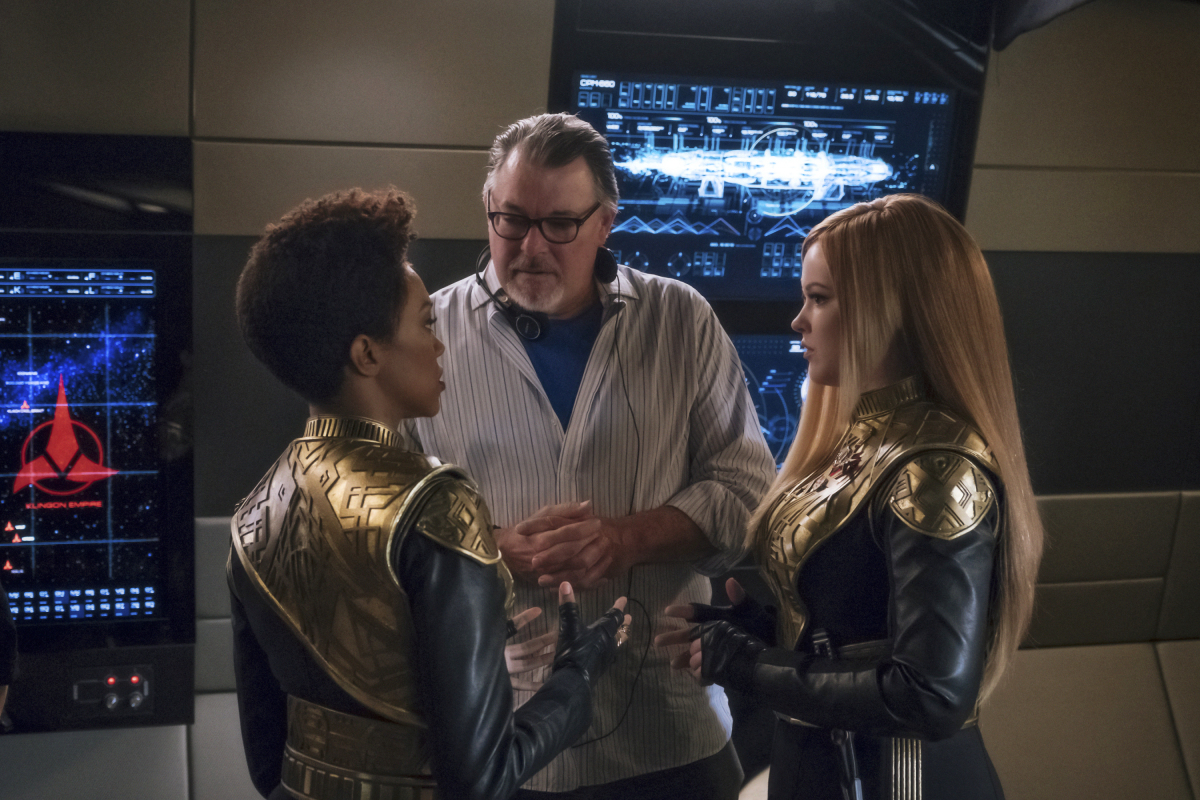 Okay, you guys ready for my confession? After the first half of Star Trek: Discovery’s latest episode, “Despite Yourself,” I had to walk away from the TV to vent for five minutes. I was that frustrated.

Now, I did calm down eventually, though I did still yell at the TV, “What the F**K??” on occasion, but as much as this was an unusually illogical episode, it was still pretty good in terms of performances and storytelling. For this, I give all credit to the talented cast and the wonderful ST: Next Generation alumnus and the episode’s director, Jonathan Frakes. He is perhaps the only director on the Star Trek roster who had the skill and cred to turn this otherwise topsy-turvy story into a fun and exciting ride.

This week’s episode finds USS Discovery in exactly the place every true fan of the franchise figured we were on our way to, for better or worse: the Mirror Universe. First seen in the ST: TOS’ episode, “Mirror, Mirror,” Trek writers have continued to take us back to that place fans have had a love/hate relationship from the beginning. For any Trek nubies reading this, the Mirror Universe is a parallel universe in which all that is good is bad, and vice versa ( and for the record, the uniforms are much more badass, IMHO). So in MU, the Federation doesn’t exist as a compassionate democratic entity, but an evil, brutal regime called the Terran Empire. Burnham explains in the MU, “the Terran Empire is an oppressive racist, xenophobic culture” and it “appears to be predicated upon an unconditional hatred and rejection of ‘other’.” In other words, the MU Federation is pretty much like the Trump administration.

Anyway, I debated whether to start with the bad news or the good news about the episode, but I settled to get the bad over with and end on a high note. So bear with me while I lay out the unpleasantness first.

The Bad News is:

1) A lot of this episode made no sense, including the fact that there seemed to be no security on the Discovery! Who’s guarding the valuable Klingon prisoner? Why is Tyler allowed to waltz in and out of the brig to see her? And why is L’Rell even there? Wouldn’t they have sent her off to Starfleet to be interrogated for every bit of Klingon intelligence she might possess?

2) I love (loved? Oh, we’ll get to that in a minute) Hugh very much, but why is he allowed to treat Paul for so long? I mean, Tilly isn’t the only one who is aware of Paul’s issues after the jumps. Hugh knew there were problems as far back as Ep. 7, “Magic to Make the Sanest Man Go Mad”. He has no professional distance. Why wait until now to remove him as Paul’s physician? Even after Lorca removes him, he’s still there kissing Paul in sick bay in front of other patients, etc., which is the most un-militaristic thing we seen yet on a show rife with military faux pas.

3) Too many people are keeping secrets on this ship and getting away with it. Why isn’t Tilly in trouble for not reporting Paul’s behavior after the jumps once Hugh becomes aware of it? Why isn’t Burnham?

4) Speaking of Burnham, is she just so in love with Tyler that she’s completely willing to risk the ship and crew to cover up for her lover, who is obviously mentally and physically compromised? I get it, she’s lived a sheltered existence and love is new to her, but she was raised Vulcan and she is a Starfleet officer! I expect more from her.

5) Speaking of Tyler’s medical issues, I’m seriously confused about how and why medical scans that would theoretically leave 21st century equipment in the dust could not detect on the first pass major changes in Tyler’s physiology? I mean, today’s MRIs would catch that ish, am I right? I mean entire organs are different! WTF?!

6) Apparently there are only ten crew members on the ship because only an emotionally compromised new crew member can pilot a salvage shuttle. Sigh.

7) Killing Hugh. Really? I mean either he’s really dead, which seems to be a bizarre move on the part of the creative team to either: a) spur outcry and publicity over a decision to kill off half of the Trek’s first openly gay couple; or b) bring him back to life some spectacular way so we can all breathe a sigh of relief and love your favorite couple even more. Either way, it sucks.

I could go on, but I think you get the idea. There were some problems that individually might not seem too problematic, but taken as a group… yikes.

But the Good News is:

1) We didn’t meet any of the Terran Empire foes in this episode which include Vulcans, who are a part of the non-Terran races resistance movement. This should make for interesting Burnham storylines should she run across her Vulcan dad, Sarek, and human mom, Amanda.

2) The Discovery officers are almost caught out when Discovery is hailed by another Terran Empire ship, the Cooper. Since our sweet-natured Tilly is the ruthless captain, and Lorca is a presumed-dead traitor in this universe, Tilly has to take the conn and, in a hilarious scene that has Frakes’ signature sense of humor written all over it, has an audio-only conversation with the Cooper’s captain, explaining away any oddities about the Discovery’s stance as mechanical issues and introducing Lorca as her chief engineer. Lorca disguises his voice by adopting an over-the-top Scottish accent.

I about peed my pants and I had to rewind (twice) to catch what he said. This was one of the few bright spots in an otherwise lackluster episode.

3) Burnham’s battle royale in the lift tube aboard the Defiant with her would-be assassin demonstrates the type of decisive action on the part of this character and is where Martin-Brown shines. Here, she is allowed to stretch into a stronger more commanding presence. Also, when Burnham takes the captain’s chair the powerful tableau is classic. Thank you again, Mr. Frakes.

Still, I’m not happy with how the writers portray “Burnham in love” as someone with no common sense. They need to find a balance or they risk making her irrelevant to a series written around her. That said, I did like the intimate moment between she and Tyler on the Defiant. It was more heated than they have given us so far, as I’ve pointed out in previous recaps. They seem more like a couple in love in this episode.

2) Tilly’s transition from shy trainee to merciless murderess Captain Tilly, whose “aka” designations include “The Slayer of Sorna Prime,” “The Witch of Wurna Minor,” and (my favorite) “Captain Killy”. Also, I wanted to know more about her statement while checking out her new “evil captain” look in the mirror: “Well, my mother would definitely approve.”

Also, when Lorca sees Tilly in her new outfit, I’m about 99 percent sure he’s still staring at her boobs when he says, “Impressive.” I truly wanted her to respond, “Eyes up, scum, unless you want them ripped out of their sockets.” Or something like that. It would have been in character and would have set up her, “Too much?” question better, IMHO.

5) L’Rell’s encounter with Tyler was powerful. As she tries to get him to access his Klingon self, it is obvious there is attachment/affection there. But to whom — Voq, Ash, or both?

6) Once again, the show’s effects were stellar and the editing, as usual, was spot on. Also, the series design team took center stage, particularly with the design of the Terran Empire uniforms and insignia, which were the fabulous creations of the amazing Gersha Phillips who was just nominated a Costume Designers Guild Award in the Sci-Fi/Fantasy Television category, for her work on the series!

7) Finally, all credit to Frakes for very Trek-like feel of the episode. The rhythm, look, and moments of humor made me feel right at home as a fan. He’s directed some of the best Trek episodes and hasn’t lost his touch. I hope this isn’t his last time directing ST: D. In fact, I hope he is invited on in a creative capacity on a more permanent basis. The show could really use him.

I hate to give the show another “meh” rating, but come on, writers, get with the program. You have so much to work with! Fingers crossed next week will go better.

About the Author: DaVette See lives in Inglewood, CA with her husband, Rob, her mother, and her seven (yikes) kitties. She has a BA in English and Theater and a Law degree. When not writing, reporting, and video editing for BGN, she operates Running Lady Studios and produces animated shorts. She was a geek before geek was chic. She loves books, plays, movies, and more than anything, she loves telling stories.