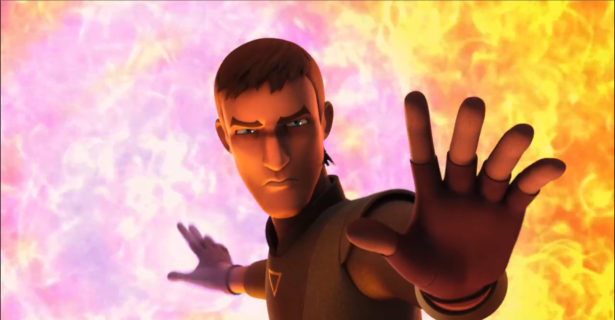 As we tick down to the end of Star Wars Rebels, the inevitability of losing characters becomes a given. How can you reconcile these characters not being in A New Hope unless something happened to them before it? That understanding doesn’t come with any peace. We’ve watched these characters grow within themselves and as thier family of choice for over 3 seasons. It’s bound to be hard to say goodbye to anyone. In “Jedi Night” and “Dume”, we had to do just that.

“Jedi Night” begins with Kanan meditating. Meditating is usually a peaceful act but there’s a sense of weary resignation. He asks Ezra to take over the mission, worried that something might go wrong because he’s too close to the situation. Ezra’s plan involves imitating loth-bats and flying to the dome where Hera is being kept on gliders. While they work on building the gliders, Kanan cuts his hair and shaves. I have a lot of feelings about this new look. The stakes are already high with Hera’s life on the line. This physical change back to how he looked when he was younger is a not so subtle hint that this mission is going to be a game changer.

Zeb and Chopper stay behind for this mission. Sabine and Ezra, dressed as Imperial pilots, secure their escape transport. Kanan goes to rescue Hera. Before he does that, he finds and steals her family relic. Hera comments on the new look and the gift, saying that Kanan hasn’t been like this since they first met. Once again, I have a bad feeling about all of this. Everything feels like a goodbye: Kanan telling Sabine and Ezra, “May the force be with you” in a somber tone; Kanan seriously telling Hera that there’s something he needs to tell her; and Kanan losing his lightsaber. They make their way to the top of the fuel depot where Hera finally tells Kanan that she loves him. They kiss. It should be a happy moment but that sense of impending doom only grows stronger.

Governor Pryce orders her AT-AT to fire on the fuel depot. As it blows, Kanan uses the force to hold back the explosion that should have engulfed them all. Hera tries to run to him, but he pushes her and then the ship away from him. For a single moment his eyes change back to their old color. He said earlier in the season that he wished he could see her. In the end, his wish comes true. The depot explodes taking him along with it, but his family survives to fight another day.

Like I said earlier, characters dying in this series is inevitable but that knowledge doesn’t make it hurt any less.

The next episode deals with the fallout of Kanan’s death. We don’t get a lot of instances of Star Wars characters processing grief in the movies. There never seems to be enough time as they jump from one catastrophe to another. That’s what makes this episode so special. They let the Ghost crew work through losing Kanan in their individual ways.

Hera isolates herself in the cave with Chopper (who, by the way, had me crying when he took Hera’s hand). She blames herself for Kanan’s death and for pushing him into a war he never really wanted. Ezra isolates himself in the field, mourning someone he’s grown to think of as a father figure.

Zeb and Sabine channel their grief through anger.  They are determined to disrupt the parade Pryce throws to celebrate the defeat of the rebels. They find out that because of Kanan’s sacrifice and the destruction of the fuel depot, their original mission to stop the manufacture of more tie-defenders was a success. While surveying the parade, they see Rukh. This will be their revenge: a life for a life. However, when Zeb is about to beat him to death, Sabine pulls him back. It’s not their way. Sabine makes Rukh into one of her works of art, and they send him back to the base. They needed this mission to come to some form of acceptance of what happened.

The loth-wolves have an intimidating look, but that hasn’t translated into their actions thus far. That changes in this episode. They’ve morphed into something frightening as they chase Ezra through a field. Later in a vision, Ezra is confronted by them. He admits his fear of the future. Who is he now without Kanan? Who will guide him? The loth-wolves point him to the Jedi Temple on Lothal which is still under Imperial control. The temple is full of secrets that Ezra has to discover.

“Restore past. Redeem future,” the loth-wolf tells Ezra. By giving him this mission, it allows Ezra to see that he can continue without Kanan. There’s still some hope on the horizon.

Hera found her own acceptance in remembering that even though Kanan had misgivings about the rebellion, he still thought they could make a change. Kanan was always able to find a solution even in the most unlikely of places. She adds Kanan to her family relic and finds her resolve to continue fighting in the rebellion. Their next mission: the Jedi Temple.

I’m still processing how I feel about Kanan’s death so it was cathartic to do that along with the characters in the show. Kanan walked into his death in the same way that Obi-Wan went to his in A New Hope, calmly and with the surety that it was necessary for the future. Kanan sacrificed himself to save his family, and it was both beautiful and incredibly sad. Despite that tragedy, their mission succeeded but there’s no time to rest. There are other missions to complete. Now I can’t help but wonder who else we’ll lose before the series finale.