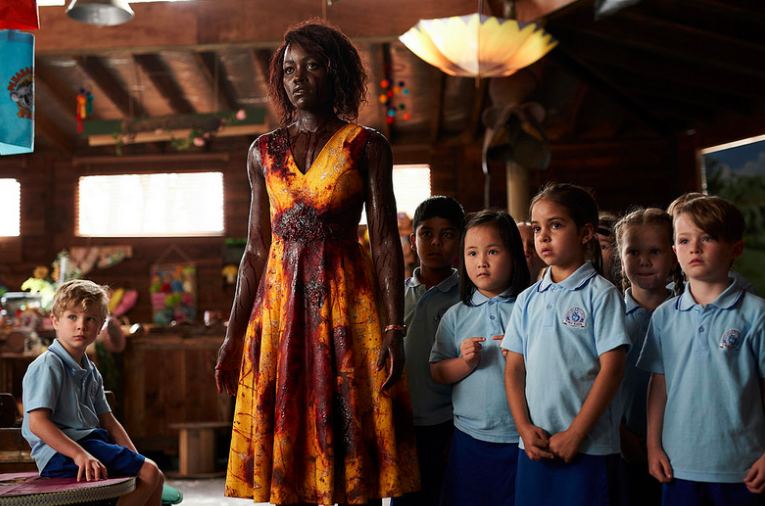 Seeing the press image of a bloodied, distressed and emotionally exhausted Lupita Nyong’o featured on the synopsis for the Australian film Little Monsters comes with the expectation that this movie is prepared to stress us out. But in fact, it’s quite the opposite.

The film is being hailed widely among critics as Zombieland meets Kindergarten Cop.  And it’s true, the elements of horror and comedy blend beautifully in this tale. If I had another film to compare it to, I would also add that it shares elements from the Academy Award-winning film Life Is Beautiful.

Let’s start with what this movie is about: Dave (Alexander England) is having some problems with his girlfriend.  The two argue incessantly and it appears they are on the brink of a breakup. When Dave walks in on his girlfriend having sex with a much older real estate agent, that breakup is confirmed.

A discouraged Dave spends time with his sister and his kid nephew which isn’t very good for the young child since Dave’s vernacular has no filter. As the two play first-person shooter video games and Dave’s colorful language rubs off on his nephew, his sister becomes quite agitated.

Dave tries his best to be a better uncle, and when he drops his nephew off to school, he is mesmerized by an enchanting and gorgeous school teacher, Miss Caroline (Lupita Nyong’o). His interest is piqued and he takes the opportunity to chaperone his nephew on the impending school excursion.

All seems well until an experiment at a local military facility goes bad and the side-effects are creatures of the living dead! A zombie appears and attacks one of the armed officials and an infectious bite starts to spread locally in the town.

Unbeknownst to Dave, Miss Caroline, and her students — there are hungry zombies nearby ready to devour their next victim. Also unbeknownst to Dave, an irksome children’s TV show personality, Teddy McGiggle (Josh Gad) is there to entertain but also becomes an annoyance when danger creeps up on them.

Little Monsters is as cheesy as they come, but that’s what gives it its charm. It’s not trying to be too scary with blood, guts, and gore everywhere and it’s not trying to be too funny, because the corniness of it all provides enough humor on its own.  Josh Gad’s over-the-top performance as Teddy McGiggle is so stereotypically ridiculous that you find yourself laughing at him, even when he’s not trying to deliver a punch line. McGiggle who is a loving and adoring host to children turns out to be a selfish prick when going into survival mode — the ultimate b-movie horror cliché.

During the film’s premiere at Sundance, writer/director Abe Forsythe gave a premonitory speech about the film telling the audience (and I’m paraphrasing here) that at the core of it all it is a story about teachers giving their all to their students.  And giving the audience the heads up on that, made a lot of sense for Lupita Nyong’o’s character arc.  As I mentioned before, there are elements from the film Life Is Beautiful in this story which gives this movie some deeper meaning outside of its silly sense of humor and its campiness.

Miss Caroline never fills her students in on the fact that zombies are attacking them, instead, she plays along like it’s a game and uses her skills as a teacher and caretaker to keep them as safe as possible. What’s also pretty remarkable about this film is seeing Nyong’o in this kind of role. We most notably know Nyong’o for her award-winning work in 12 Years A Slave, her voice as Maz Kanata in Star Wars, and her espionage skills as Nakia in Black Panther.

And while we did see some pretty cool action scenes in Black Panther from Nyong’o, in Little Monsters she shows us yet again what she can do by taking on a group of zombies. It was refreshing to see Nyong’o do comedy and play into it so well. And with the highly anticipated horror movie Us due for release in March and making its premiere at SXSW, I’m curious to see again the synergy of horror and comedy played by Nyong’o in her next film.

Little Monsters has already received a distribution deal at Sundance, NEON, and Hulu winning a bidding war between four other distributors.

Little Monsters is exactly what Forsythe describes, and he also mentioned this was a love letter to his son.  If you’re interested in Little Monsters to see zombies, Lupita Nyong’o decapitating heads, and hearing school-aged kids sing one of the greatest earworm ballads of our time, Taylor Swift’s “Shake It Off” — the price of admission just may be worth your time.