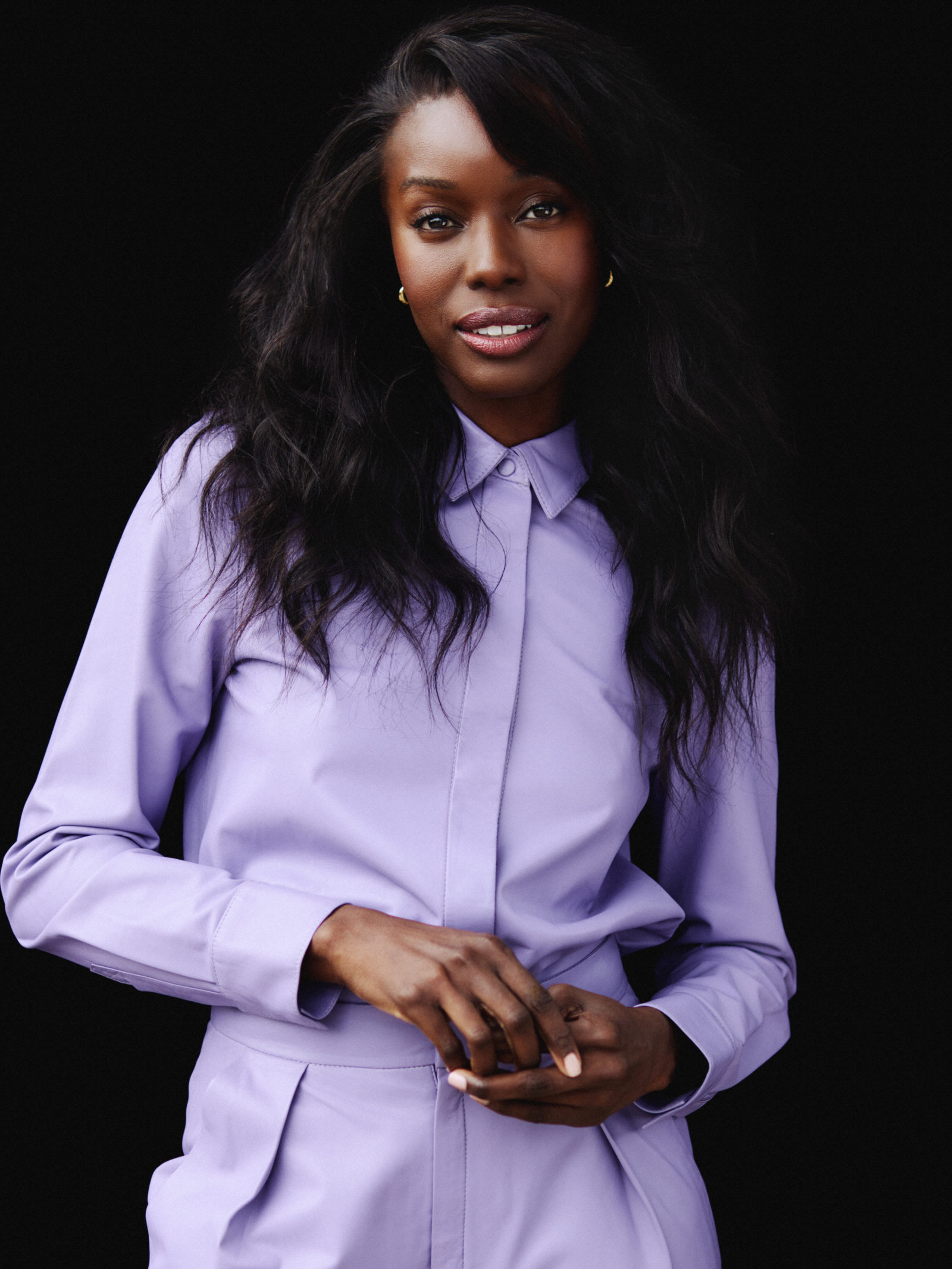 Many Black women in America historically have had to work for a living caring for white babies while having to depend on family members to care for their own children. Writer/director Nikyatu Jusu’s haunting film Nanny follows the caregiver Aisha (Anna Diop, Us) on her 21st-century quest to earn money as the nanny for a wealthy white progressive family in New York City. Aisha is determined to buy a plane ticket to bring her son from Senegal to America to live with her. As Aisha works towards her goal, otherworldly influences enter her dreams and insert themselves into her actual reality.

Anna Diop’s star is on the rise, and we are grateful she took time out of her busy Sundance Film Festival schedule to speak to BGN via Zoom about Aisha’s journey in this mesmerizing film.

The movie begins with Aisha staying with an “Auntie.” Was she a relative?

In the film, Aisha’s auntie isn’t even Senegalese. She’s an older woman with whom Aisha is living, and so, she is “Auntie.” In so many African immigrant and Black American communities we have cousins, aunties, and uncles who aren’t our blood relatives but we grew up helping one another out. This is prevalent in the Senegalese community. I think in almost every African country and community there is a sense that everyone is your aunt, everyone is your uncle, and everyone is your cousin. They are all looking out for you, especially those you live close to and grow up with.

There’s that sense of community, but Auntie was always away working while Aisha was being tormented. The cycle continues…

Yes. I think Nikyatu purposely wanted to depict Aisha’s incredible loneliness. She is in this new foreign country, and she has no family here.The most important person to her (her son) is a sea away. But she does find family, support, and a little alleviation in Malik [Sinqua Walls, American Soul] and Kathleen [Leslie Uggams, Deadpool]. We see Malik really comforting her and being a rock for her to lean on.

Aisha and Malik together was really beautiful to see. Through Malik, Aisha finds a mother figure in his Grandmother Kathleen, played by the legendary Leslie Uggams. What was the best part of being able to work with her?

When we weren’t filming or were on a lunch break, she would just tell me stories about her life — and what a life it has been! My gosh, she has lived so many lives! She’d talk about her husband and her children and dating this person and that person — you know, she’s dated some fellas. [Laughs.] As an actor and singer during that time [the ’60s and ’70s], she just lived an incredible life even though there were a lot of difficulties being Black. She shared these lovely stories. She is as spectacular as you think she is. She’s just cool, man.

Kathleen is an empath and opens up the West African mysticism that is woven through this price beautifully. Were you familiar with the deities Nikayatu Jusu used to tell this story?

I, embarrassingly enough, really hadn’t heard of them. I’m from Senegal. We certainly have our myths and our spiritual otherworldly presences that we believe in, and my mother is very very very much all about that. She’ll have me shower with holy water for certain things. Then there are other things that people are praying over, and you do this if you want to keep this spirit away. If you want to invite this spirit in you must do this ritual and all of that. But Mami Wata specifically, I wasn’t familiar with. I like that I wasn’t familiar with her because Aisha herself didn’t really believe in all of that stuff. She has a line to Leslie’s character where she says, “You know my grandmother really believed in all this, but I never did.” And Leslie’s character [Kathleen] says,” Well, whether you believe it or not, you are magic.” And that’s very much my mother’s stance on it too. She’s like, whether you believe in this or not. These spirits and such are here for you and all of that. This is part of who you are.

As y’all were shooting did any of those spirits come through and start messing with you?

[Laughs.] I remember saying to Nikyatu that there was always just a presence on this set that felt like there was something other than us there guiding us in a way. And watching it now, the film has a very dreamlike vibe. It always felt like there was something there with us. We filmed this by the grace of God, or the spirits or something because we filmed during COVID-19 and it was low budget. So if one person got sick the whole shoot would have been crippled. But we made it through.

The dynamic between Aisha and her mother Amy (Michelle Monaghan) was so real I was screaming at Amy and her foolishness and cheering for Aisha. I loved how Aisha advocated for herself when dealing with Amy. Aisha wasn’t a victim in this movie, and she spoke up for herself beyond the possible negative circumstances. Where do you think that aspect of her character came from?

As Kathleen says in the film, ”How do you use your rage?” I think it came from the spirit of Mami Wata. Whatever presences imbued Aisha gave her a kind of courage, fearlessness, and confidence. All of that built-up emotion to get her son back with her was the core motivation, a massive factor, but the spirits are certainly imbuing her to react without fear. Yes, I think that all of that came from spirit as well.

Right now, it’s people watching this film because I’ve been a huge fan of Nikyatu and the support of her work. She has such a unique voice with so much to say that I believe very much needs to be said in this climate in our world today. So, right now what’s giving me the most joy is people watching her work and hopefully giving her more resources to make more of it. That’s inspiring to me. It makes me want to be a part of this industry — it makes me want to be here to witness that and hopefully be a part of it.