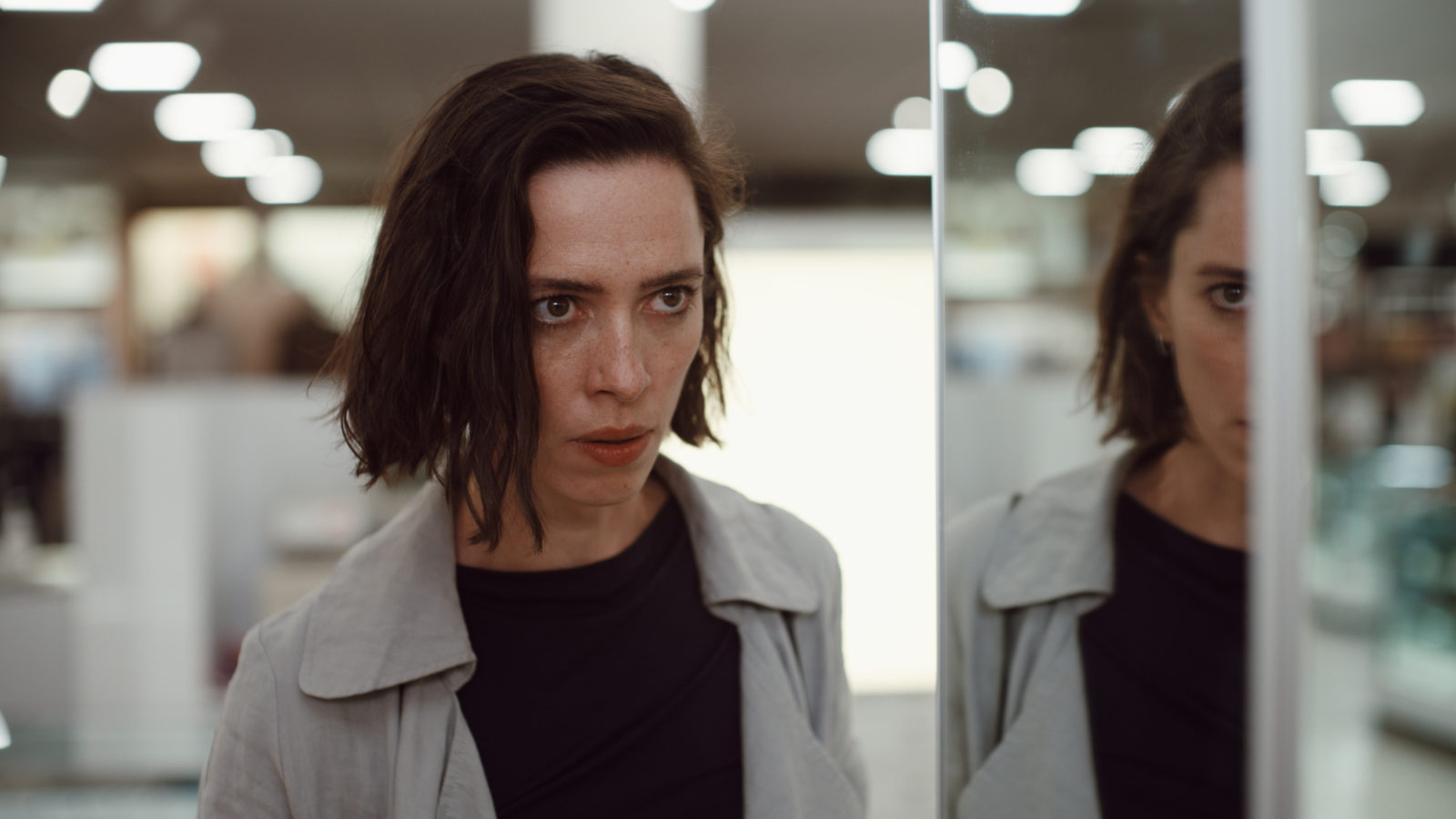 After its premiere at the 2022 Sundance Film Festival, IFC Films acquired one of the freshest psychological thrillers of the year. Andrew Semans’ sophomore feature, Resurrection, explores the fear of parenthood, the loss of control, and debilitating trauma. The writer-director (also known for Nancy, Please) delivers a disturbing, thought-provoking film that keeps you guessing and never lets you get comfortable.

Margaret (Rebecca Hall) seems to have a content, if a bit boring, life as a successful businesswoman. She’s a single mother raising her daughter Abbie (Grace Kaufman), who’s preparing to head off to college, which Margaret isn’t handling very well. She also has a very casual arrangement with a married coworker, Peter (Michael Esper).

Her cool and calm demeanor suddenly changes when she attends a conference and spots a man from her past. Margaret’s visceral reaction is anxiety-inducing, and we don’t even know who he is yet or if he’s even real. We later learn that this is David (Tim Roth), Margaret’s psychologically abusive ex-boyfriend from over 20 years ago. Whether he’s real or a hallucination is still questionable.

As soon as she sees David, the entire film experience becomes unnerving. When he’s not physically near her, he’s still consuming her thoughts. The invasiveness affects her so deeply that it dictates every part of her life. Her paranoia reminded me of a line from Shining Girls. When talking about the unknown man who attempted to kill her, Kirby (Elisabeth Moss) tells a detective, “He’s everybody. He’s nobody. He’s all the time.”

After the initial encounter, David is now everywhere Margaret goes, casually stalking and gaslighting her like it’s his job. Unsurprisingly, no one takes her fears seriously (just another hysterical woman!), because she doesn’t have any proof that these run-ins are anything more than coincidences. Even her daughter thinks she needs to chill out — never mind that her mom is clearly traumatized. Margaret is instantly scared but seeing him again also triggers feelings of shame and guilt.

Part of what makes their interactions so unsettling is that David seems relatively normal at first. In an interview with Moviefone, Tim Roth said, speaking from his character’s perspective, “Obviously, this woman is having a difficult time and he is only there to help and try to calm her down, and she doesn’t understand.” Roth plays David with a quietly unhinged disposition.  As the film goes on, his true menacing nature becomes less subtle, and his constant gaslighting makes him easy to despise.

At the end of the first act, the always magnetic Rebecca Hall delivers a close-up, one-take, eight-minute expository monologue. Margaret unleashes her darkest secrets on her intern Gwyn (Angela Wong Carbone), a story so unbelievably messed up and bizarre that audiences might question Margaret’s sanity and/or her reliability as a narrator. We really don’t know because this is her story and we’re in her headspace.

In describing her character, Hall told EW, “There is something very particularly rigorous about her, almost to the point of being obsessive.” We get a sense of Margaret’s intelligence and expertly curated life before she starts to unravel. She’s already fiercely protective of her teenage daughter, and, given the trauma Margaret suffered when she was young, it makes total sense why she wants/needs Abbie close and safe. Now that she’s being tormented by someone she believes to be capable of serious harm, that overbearing behavior is dialed up to 11.

Andrew Semans told Nightmarish Conjuring that it was important to him that the film was “psychologically realistic.” It’s this aspect that makes Resurrection so chilling. Escaping abusive relationships and dealing with threats from exes are very real problems. While what happened to Margaret is so terrifying that it almost seems otherworldly, Semans succeeded in crafting a nightmarish yet truthful depiction of toxic relationships, abuse, and severe emotional trauma.

The film’s aesthetic is reminiscent of Yorgos Lanthimos’ often minimalistic settings and bizarre characters who are dropped into even more bizarre situations. Like Margaret, Anna Kathleen’s (​​Dead North) production design and Liz Flood’s (ZIWE) set decoration are sharp and professional, using a lot of gray, white, and black, not trying to stand out, which works perfectly with a story this wild. Costume designer Alexis Forte (The Sky Is Everywhere) adds to that clean-but-disheveled style with something as subtle as a half untucked shirt in Margaret’s otherwise sleek, corporate look, which shows the descent of her mental state.

Resurrection is a psychological thriller in every sense but progressively becomes more horrific as the story unfolds. The film is a blend of Ari Aster meets Robert Eggers with some Yorgos Lanthimos surrealism sprinkled on top. Rebecca Hall and Tim Roth are endlessly captivating, making for an intense, cerebral viewing experience.

Resurrection hits theaters July 29 and will be available on-demand August 5. The film first premiered at the 2022 Sundance Film Festival.