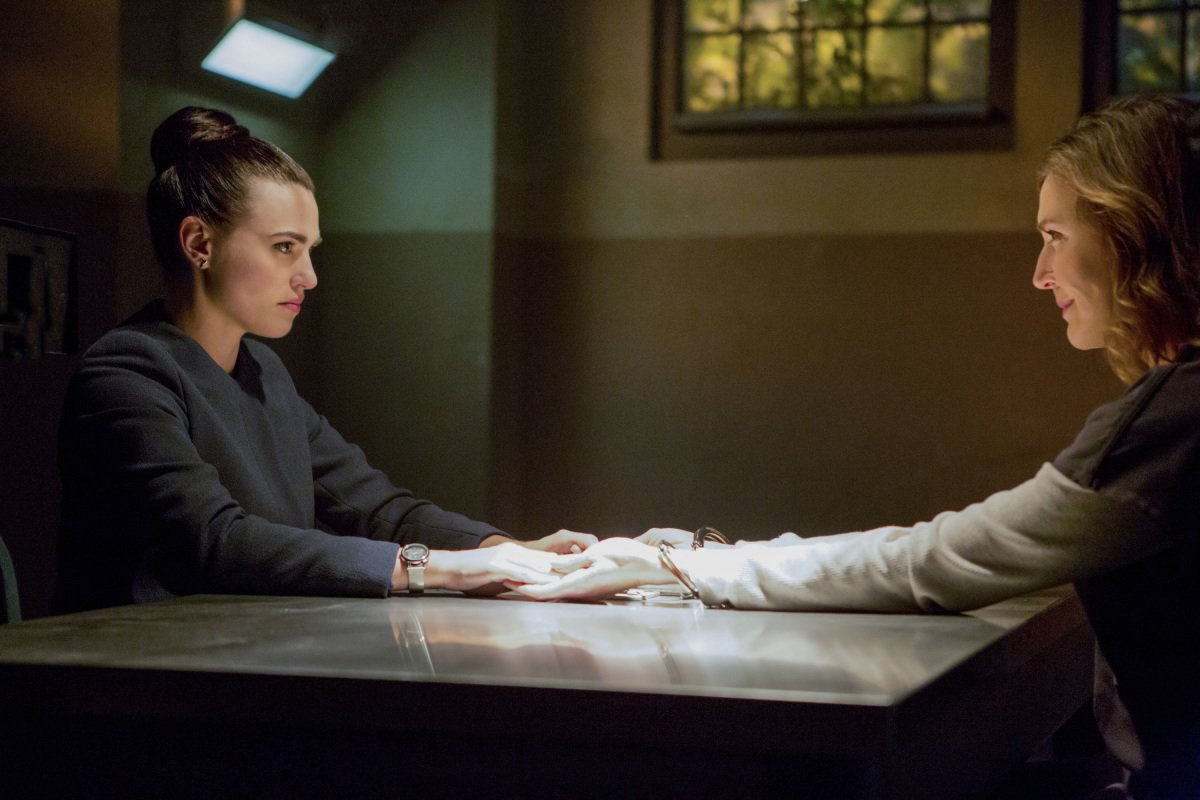 Lena is Kara’s only non-DEO, non-CatCo friend. Even though some fans wish it were more (It WAS the Valentine’s adjacent episode).

Lilian Luthor is on trial

This week on Supergirl, Lilian Luthor is on a very public trial (a la OJ or the Boston Bombers) for being the head of Cadmus and trying to kill all the aliens. Kara goes to check in on Lena, who is being scrutinized for testifying against her mother. Kara encourages Lena to go talk to her mother to find closure, and she complies.

Lilian gives Lena an offhand apology about how she’s treated her her entire life. She then tries to justify herself by explaining to Lena that she is a product of her father’s affair with another woman. Lilian then apologizes again and tells Lena she wants to start over as a family.

Metallo (who is in jail for trying to kill #teamKrypton – see episode 2×02) receives a package in his cell right before he’s supposed to testify in court. He gets a little passionate while on the stand and the next thing you know he’s revealing Kryptonite in his chest and is attacking the courtroom. He frees Lilian from her handcuffs and the two of them walk out of there like they just finished brunch, not caused a terror attack.

Lena, who’s being taken to an unknown location by her mother and Metallo, demands to be taken back to jail. Her mother tells her it’s no use because everyone thinks she’s an accomplice by now. Instead, she encourages Lena to join her crusade for the good of their family. The three end up in one of Lex’s storage facilities where he keeps weapons to “even the playing field” for humans against aliens. The vault is only accessible by Luthor DNA however, and Lena is the only one who can open it. She refuses, and tries to leave but is stopped by Cyborg Hank Henshaw.

Winn discovers that Lena was framed by Cyborg Hank and then locates Metallo using the Kryptonite tracker. The Kryptonite in Metallo’s chest is impure and unstable, close to nuclear levels. Kara goes to save Lena despite the fact the when Metallo’s chest explodes the Kryptonian radiation will kill her. Supergirl fights Metallo and Cyborg Hank in order to save Lena, but loses badly. She tries to talk reason, telling Metallo that the element in his chest is going to explode and kill him. He doesn’t listen and their battle continues.

Lilian and Cyborg Hank dip, leaving an unconscious Lena to fend for herself while Supergirl and Metallo fight. Supergirl isn’t doing well because of the Kryptonite-light, but Martian Manhunter comes and saves Lena and Kara at the last minute.

Lena thanks Kara for believing in her… by sending her a bunch of flowers (all the Lara shippers rejoice).

Cat Co. is planning to put Lena on the front cover stating that she’s guilty and Kara tries to object. Kara turns to James to stop it, but James true to his Metropolis roots does not trust any Luthors.

Metallo goes to break Lena out of jail but he’s confronted by Guardian. The two fight, but James is knocked out by Metallo and his Kryptonite. Metallo, abducts Lena and takes her back to her mother. After getting his butt handed to him, James returns to the DEO where Alex patches him up. James thinks there is something wrong with Metallo’s new Kryptonite, but Kara is too pissed off at him getting hurt to notice.

Kara is still mad that no one believes in Lena even though all evidence points elsewhere, and James is hurt that Kara has faith in Lena, but none in him. He tells her that he doesn’t need her protection, but her trust, and unfortunately, she leaves the conversation open ended.

Kara and James apologize for not hearing each other, make up and decide to be friends again (even though James clearly loves her).

Kara and Mon-El run into each other at the bar, after Kara has been actively avoiding Mon-El ever since she told him that they wouldn’t work together and she ran into him and Eve at Cat Co. She asks him about their date and he tells her it went swimmingly.

In her anger toward James, Kara accidently runs into Eve and she drops all Eve’s paperwork. The two get to talking and Kara asks Eve about her date with Mon-El. Contrary to what Mon-El told her, Eve tells Kara that it was the worst date of her life because Mon-El wouldn’t stop talking about Kara.

A frustrated Kara goes to a training room to destroy some equipment and let off so steam. Mon-El walks in on her during this moment and chimes in telling her he misses her. Kara admits that she’s been avoiding Mon-El because she’s mad that he was dating Eve. Mon-El is confused as to why she is mad, and instead of telling him the truth, Kara pulls a Mon-El and denies everything and leaves.

Kara apologizes to Mon-El for pulling away and admits her feelings for him (bleh). The two are about to kiss, when they are interrupted by a magical light, that turns into a man named Mr. Mxyzptlk who announces his love for Kara.

I’m realizing that I’m starting to enjoy Snapper more and more mostly because any episode with him speaks to the importance of proper reporting techniques which is critical in this day and age. The episode itself was good, but I think focused on too many of Kara’s relationships at once. I think we could’ve narrowed it down to two, with Lena obviously being one of them.