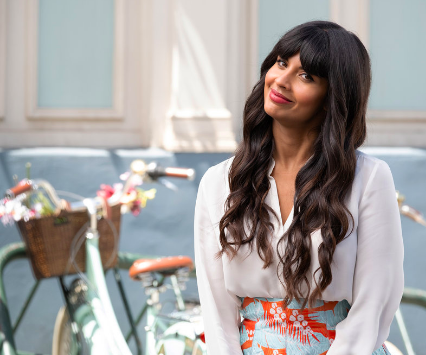 Tahani Al-Jamil is a motherforking badass. She rules this shirt. If neither of these sentences make any sense to you, it’s safe to say you probably haven’t watched NBC’s masterpiece The Good Place.

You should change that. Right the fork now.

All right folks,  before I launch into a spiel about why Tahani is the most awesome female character ever, I’ll give you a quick summary of the critically acclaimed hit show I’ve been binge-watching like crazy.

In The Good Place, an ordinary woman, Eleanor Shellstrop (played by the fabulous Kristen Bell), has an accident. She dies. End of story.

Just kidding. It’s only the beginning.

After dying in an incredibly embarrassing manner, somehow Eleanor miraculously wakes up in an all-white room that closely resembles a doctor’s clinic far more than a place people end up when they die.

She’s greeted by Michael (essayed flawlessly by Ted Danson) who explains to her that she’s been lucky enough to be selected for what is known as the Good Place, a utopian paradise taking the form of a charming little town.

According to Michael, who rattles off a long list of good deeds Eleanor has performed, the selfless life she led on Earth made her eligible for a Heaven-like afterlife.

Everything sounds perfect, save for one tiny problem.

They’ve got the right name, but the wrong woman.

And I’m leaving you with that cliffhanger — you’ve gotta watch the show if you want to know what happens next.

Anyway, much to her surprise, Eleanor makes an unlikely friend in The Good Place: British socialite Tahani Al-Jamil (Jameela Jamil).

Tahani is wealthy, sophisticated and endlessly glamorous — all things Eleanor is not.

Although Eleanor initially dislikes Tahani for her condescension, do-gooder nature, and tendency to name-drop, the two women later form a genuine bond that’s messy, imperfect, and, most importantly, one hundred percent real.

Born in Pakistan and brought up in England, Tahani is the quintessential socialite: highly educated, ridiculously wealthy, and the perfect hostess, and she is somehow on a first name basis with many many celebrities.

Though there’s a lot of awesome things about Tahani, the reason why she’s the star of the show (in my opinion) is because she’s a woman of color.

And one of the leading characters, no less!

Now why is that so groundbreaking?

First and foremost, I think it needs to be mentioned that out of the six protagonists of the show, three are people of color. That shouldn’t be a rarity but unfortunately, even in 2020, it is.

To its everlasting credit, all the women of The Good Place, including Tahani, have fully formed, distinct personalities, hopes, fears, goals, and ambitions: exactly the way it should be.

The Good Place ensures that it places women front and center in its episodes, not relegating them to be eye-candy or hapless damsels in distress, as well as completely demolishing the old and tired trope of “fridging,” which is the all too common recurring motif of female characters being harmed, abused, or killed in order to further a male character’s storyline.

It’s worth mentioning that there are also quite a few interracial relationships on the show, and all are complex, positive, and explored in their entirety.

As a Brown woman myself, I can’t tell you how happy it makes me to see Tahani on the screen — an incredible woman of color who isn’t forced to shoehorn herself into one of the bordering-on-racist (and sometimes completely racist) boxes that women of color in the media are frequently shoved into.

She is Pakistani, yes, but she doesn’t have a thick, obviously fake accent. She isn’t seen as the “exotic” foreign woman, which is something many, many BIPOC women have been subjected to, whether it’s their objectification in the media or in real life.

Tahani’s culture and ethnicity plays a role in her life, but she isn’t defined by it.

Let it sink in.

How many times have you seen a non-white female character on the screen who is a total stereotype, a summation of blatantly racist ideas that more often than not are entirely wrong?

I’ve seen that far too many times to count, whether it’s the “spicy” Latina (Gloria Delgado-Pritchett of Modern Family comes to mind), the shy and studious Asian girl who surprise surprise, plans to become a doctor to appease her family, or so many awful (and incorrect) examples that continue to promote casual racism and racial microaggressions.

While there’s problematic portrayals aplenty, there have been a few ones that are really, really good.

Off the top of my head, there’s Penelope Alvarez from One Day at a Time, Cece Parekh from New Girl, and Claudia Kishi from the Netflix reboot of The Babysitters Club. All of these characters knock it out of the park with the respectful, culturally sensitive, and carefully developed portrayals.

Their ethnicity is definitely acknowledged, and at times plays a major role in their lives, but not once does it reduce them to copy and paste stereotypes.

Joining that list is Tahani, whose impeccable fashion sense, charming accent, and social butterfly personality is never once overshadowed by the color of her skin. Speaking as someone who can count on one hand the number of badass Brown women she’s seen on TV: Gold star.

What sets The Good Place apart from all the other shows out there is the brilliant depiction of Tahani Al-Jamil as a strong and powerful woman of agency, a woman who knows she isn’t perfect and has learned to accept, and make peace with, the fact that she never will be.

The character arc she displays in the show feels genuine — learning and growing massively as a person as the seasons progress.

Born into a wealthy British-Pakistani household, Tahani followed a rigorous path of education, attending the prestigious Hertfordshire School for Expressionless Girls, before forging ahead to study at Oxford University.

Throughout her life, Tahani was an avid philanthropist, raising sixty billion dollars for a non-profit organization as well as contributing to multiple charitable causes.

Although she achieved several noteworthy goals and attained international recognition for her efforts, her ultimate endgame wasn’t simply to be a good person, but rather to finally impress her parents and prove herself to them.

For a little background into Tahani’s life, you’d have to start with her relationship with her family; her high-maintenance parents who set the bar high, as well as her younger sister Kamilah, an wildly competitive overachiever.

Tahani was often compared to her sister and for most of her life remained in her shadow. Being overlooked and ignored by her parents, whose approval she often sought, resulted in Tahani displaying a constant need for external validation.

That mindset stayed with her for a long time, manifesting itself in several ways, such as exhibiting a slightly narcissistic attitude, frequently name-dropping, and trying to impress others in an attempt to establish her own self-worth and occasionally being patronizing.

But she doesn’t stay like that forever. After experiencing some tough love moments and hard to swallow truth pills, Tahani’s world does a 180 and her perception on life (afterlife?) changes, big time.

She realizes that she’s got nothing to prove to anyone — not even her parents. After finally standing up for herself and getting the closure she needs, Tahani really comes into her own as an independent, assertive woman who commands respect and lives on her own terms.

She also understood that her rivalry with Kamilah was as unhealthy as it was counterproductive, and decided to bury the hatchet with her sister.

As for her relationship with her friends, Tahani evolves massively as a person and truly appreciates each one of them, improving herself along the way in a commendable show of personal growth.

For me personally, there’s three hallmarks of Tahani’s characterization that score a 10/10 in my book.

First is her height. The woman is tall.  I’m talking 5’10, maybe 6’ 0 when she’s got high heels on. When’s the last time you saw a tall woman on the screen? Typically female characters seem to fit snugly into the “short and petite” box for some reason; perhaps because men find it emasculating when a woman is taller than them? Food for thought.

Second is her name. Originally, the character’s name was discussed as being “Tessa” in the first walkthrough for the show. It was later changed to “Tahani” to better fit the role. Usually if there’s a woman of color in the media, more often than not she has a Western first name and an ethnic last one. Not that there’s anything wrong with that; but I have to admit it’s really cool to see a woman of color with a first name that wasn’t the first result on the page when you google “ethnic baby names.” Her name, Tahani, means “congratulations” and Al-Jamil means “beautiful.” Sounds about right.

Third is her actor. Played by the inimitable Jameela Jamil, the actress infuses her trademark body positivity and tongue in cheek humor into the role. In a promo image for the series, Tahani was pictured in a flowing yellow dress with visible back fat, a veritable first for a streaming show. This image was unaltered because as told to the press, Jamil flatly refused for her character to be Photoshopped, stating explicitly that she did not want to cover up any flaws and preferred that Tahani be shown unedited.

Jameela Jamil has been spearheading the “I Weigh” project and is a steadfast supporter of the body positivity, or rather body neutrality movement, citing the need for empowering representation for women.

All in all, there are three main reasons why Tahani Al-Jamil crushes the afterlife:

And she throws the best parties anyone’s ever been to.