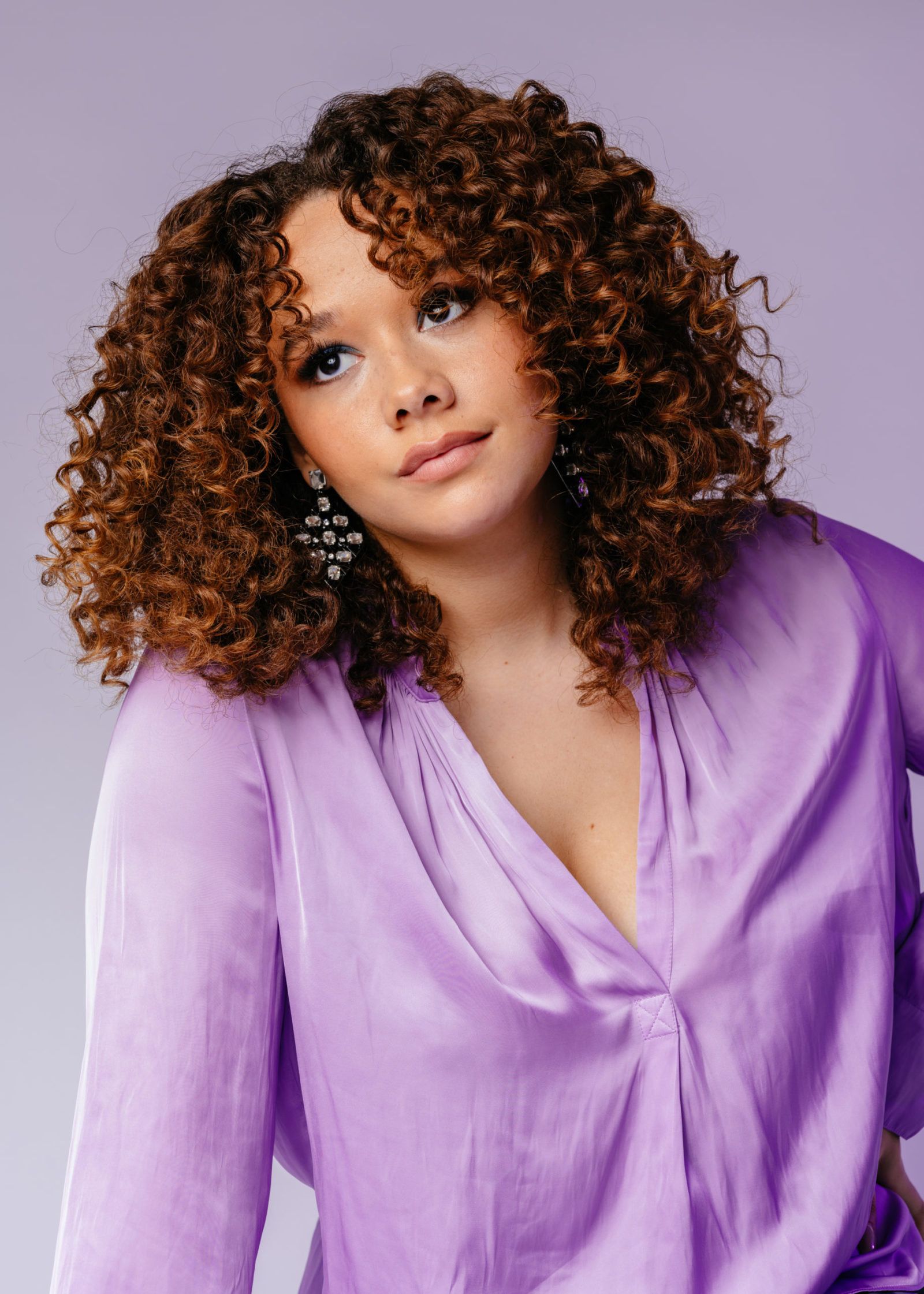 Actor and singer Talia Jackson may be quarantined like the rest of us, but she is definitely making use of her time.

As her hit Netflix show Family Reunion is on a production hold, the 18-year-old is keeping busy with recipes, workouts, and of course, group chats. Jackson’s drive to keep herself occupied during this unparalleled time comes as no surprise considering she’s been working towards her dreams since she was a little kid and has developed such a strong work ethic because of it.

Family Reunion is a wholesome show that reminds us of the incomparable and nuanced experience of being a part of a Black family. But Jackson’s performance as Jade McKellanisn’t just as stellar actor — she has an outstanding voice and great music to pair with it.

How have you been adjusting to the quarantine? Has your schedule been more open during this time?

Yes, my schedule has opened up a little bit more since we were in the middle of filming season 2 for Family Reunion. We’re kind of filling those holes with music and the meetings and just trying to stay busy and stay active. We don’t want to get out of this whole mindset for too long. So I’ve just been working on my music a lot. I’m writing and trying to work out and talk to friends and just be more active somehow — instead of just sitting around and doing nothing, although I would love to do that.

Have you been using Zoom and things to stay in touch with your friends?

Yeah, we’ve been doing some Zoom calls or just doing group FaceTime. Even Snapchat calls and stuff like that, staying in touch with group chats. We have this one group chat that we go on Zoom every night almost. I don’t join all the time. My brother does check up on our friends, and we’ll play video games together and stuff like that. So yeah, we stay connected. It’s like the new normal.

Your Netflix show Family Reunion is on production hold. Do you all have any idea of a timeframe of when you will start working again?

They said after summer, like September or that area, but we just don’t know anymore because the California stay-at-home order got laid back and then, of course, they have to make sure of insurance and stuff like that. I’m sure that if anything happens, if anyone gets thrown or whatever on set, that they have to make sure they don’t get sued. So we’re thinking it’s going to be September? I don’t know. Sometime definitely after September, or in September would be really nice.

Family Reunion is such a great show. What is it like being on set and filming?

It is such a joy being on set. Everybody is just so warm and welcoming, and it’s so fun to have the kids on set. We have a really cool set that they built, and our set decorators and our art department is really amazing. So it’s kind of cool when I show up on set each episode. You read the script, and you’re like, “Oh, this is how this is gonna play out.” Then slowly as we rehearse throughout the week, I get to see the set get built. And it’s really interesting to see what they do with it. We all have such a great time on set. Like, we have a little party going on!

The cast of the show is star-studded, with actors like Tia Mowry and Loretta Devine. Your interaction with Tia online is special. What’s it like working with these ladies and the other actors?

Oh, it’s so amazing. We all try and stay on some Zoom calls. Actually, we’ve been doing Zoom calls every week. We’re all staying connected and not losing touch from each other since we will be going back. Even when we’re not in the middle of shooting or quarantine, we’re all so close. Me and Tia have done this little YouTube thing for the show. We always have such a good time. Tia specifically get along so well because we have a lot of similarities, especially in our careers. She was a teenage mixed girl around my age doing a similar show. She always has a lot of advice for me, and anytime I have any questions about anything, she’s always there to help out. We love sharing tips about gluten-free food because we both love it. So we have fun. We’ll go to set and we’ll be like, “Oh! found this and it’s gluten-free and blah blah. It’s vegan and you can eat it and it’s really good with avocado.” We love sharing tips like that.

What’s a piece of advice Tia has given you for acting?

Especially being younger, you have trouble separating yourself from the character in a sense because I do get so invested in my character. I almost involve myself a little bit too much in the character. One day because I was having trouble with something, I was just like, “I don’t know.” She told me, even things that make me uncomfortable on set or if you have to do a scene sometimes that makes you uncomfortable, you have to separate yourself from the role and be like, “This is Jade” (in my case). And when I go home, this is not me, it’s the character. You have to stay separated but still 100%.

You have nearly 200,000 followers on Instagram. How has Instagram helped you stay connected to fans and friends during this time?

It’s really good. Actually, I’ve been going live a lot, which I didn’t really do before the whole quarantine. I feel like it’s helping me stay involved, expand, and also let people know what I’m doing for my quarantine and to help other people find ideas for things to do. Even being on social media has helped me find things to do to help me stay busy, like looking at the Explore page and finding new recipes. I started following like 20 new dessert accounts. So I’m looking through that all the time, looking for stuff to bake, and I found some new workouts that you can do at home. A lot of fitness people have been putting out videos for at home workouts, which has been really helpful. Yeah, I’m definitely making the most of it [quarantine]. I feel like I’m kind of a homebody person, so this isn’t terrible for me. But it’s starting to — you know — it gets to anyone at some point.

Your new song “Complicated” just came out a few days ago. How has the response from your fans been for your music?

It’s been really good. We actually are doing a remix that will be put out pretty soon. I think you guys are really gonna like that one, too. We’ve had a lot of really good feedback on “Complicated,” and it’s one of my favorite songs that I’ve ever written.

I love watching all the Instagram stories of all the girls and guys doing little dances to it and singing to it. It makes me so happy. It makes me feel like I’m not even really doing it for me. I just do it for everybody else, and it’s like, oh, wow, people actually care what I put out.

What was the writing process like for the song?

For the writing process, I worked with a writer. We sat down and some of it had already been written. So I heard the song through with one of the guys who wrote it, Abe, and I really liked it. We met up in the studio. Some things I added a little bit, so that it was me a little bit more in the story I was trying to tell, and we recorded it pretty quickly. It was a pretty quick process. I knew I wanted to do the song for a while. Once we got together, it was simple and “get it done.”

Is there anyone you’d love to collaborate with, or are there just any personal goals you have?

Female-wise I feel like H.E.R. or SZA. They’re a huge inspiration to me, and I pull a lot from their music. That would be great. I would like to head in the direction of more R&B than Pop necessarily. That’s the music I’ve always listened to, and that’s the direction I’ve always seen myself going in. As I get older and get into my 20s, I feel like that’s the type of music my fans start to relate to. My fans grow so the next three songs at least are going to be more R&B and Hip-Hop style.

What’s the first thing you want to do when you’re out of quarantine?

Go to a mall. Go to the Grove and the Americana. For those who don’t know, it’s basically an outdoor mall in LA. Basically I just want to go there when this thing is done and walk around with people and be able to go into stores.

You can catch Jackson’s latest song “Complicated” wherever music is streamed and Family Reunion on Netflix streaming.