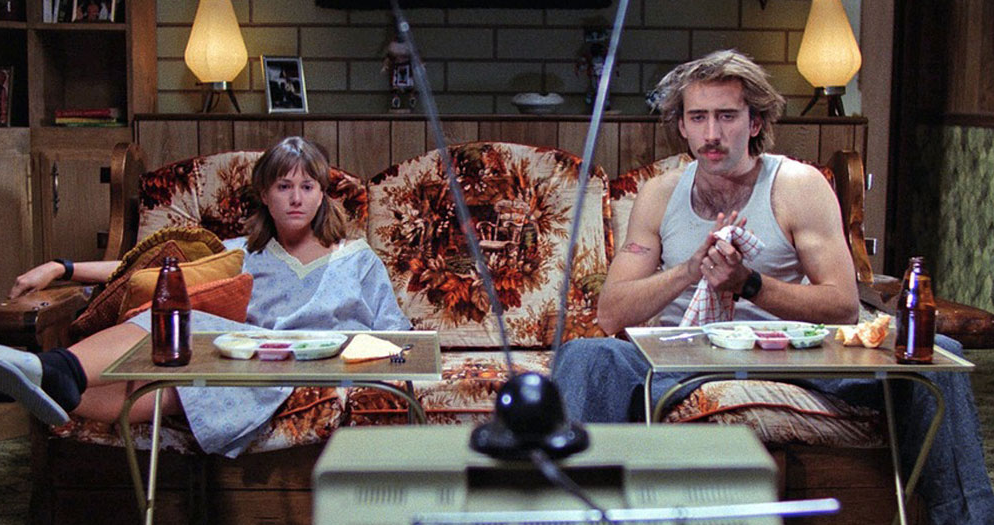 When I think of peak Cohen Brothers, the movie that comes to mind is the 1987 film Raising Arizona. To celebrate the premiere of Nicolas Cage’s latest film, The Unbearable Weight of Massive Talent, let’s revisit one of his classics. In the story of Raising Arizona, convict and known convenience store robber H.I. McDonnough, aka “Hi” (Nicolas Cage), falls for Edwina, aka “Ed” (Holly Hunter), who is a police officer that becomes familiar with H.I. due to his recidivistic behavior.

As the two get to know each other due to his numerous stays in prison, they fall in love, H.I. proposes to Ed, and they get married. Once released from prison, they move into a mobile home and decide to raise a family. However, when Ed discovers that she’s barren and cannot have children, they struggle to adopt due to Hi’s criminal record. The plot of this wild story kicks off when Ed tells Hi to steal one of the Arizona quints — the quintuplet sons of furniture store owner Nathan Arizona (Trey Wilson).

After the success of the 1984 dark noir-thriller Blood Simple, Joel and Ethan Cohen went on to direct this quirky, off-beat comedy that is a classic. While the title of this series is deemed “cult classics” Raising Arizona is beyond cult status. It is, in fact, a comedy classic, ranking to be one of the greatest comedies of all time.

Raising Arizona was the Cohen brothers’ first big-budget movie, according to actor Sam McMurray who played Glen. Glen is Hi’s foreman who is married to Dot (Frances McDormand), but that doesn’t stop him from propositioning Hi to swap wives. As a result, Hi delivers a much-deserved punch to Glen’s face which ultimately leads to him getting fired from his job. McMurray’s depiction of Glen is one of the most hilarious moments of the film as a man who is too eager to chum it up with Hi telling corny jokes while ignoring his kids destroying their mobile home.

However, the standout performances in Raising Arizona are that of Nicolas Cage and Holly Hunter, the film’s two leads. Hunter was actually cast in the film because she was friends with Frances McDormand, wife of director Joel Cohen. The character of Ed was already made for her. Hunter’s distinct Georgian accent was perfect for this film’s southern-fried charm. Ed is a woman who wants a baby so desperately that she’s willing to break the law to get one, even though she is the law.

The irony of her character is compelling. The fact that she tries to fit the morality mold by asking Hi to disinvite his convicted felon friends from staying the night after they broke out of jail, adds more complexity to how Ed approaches the lines of ethics. Hunter easily can switch from being funny to dramatic. One example is when she breaks down hysterically crying as she sees baby Nathan Jr. after stealing him and realizes how much she loves him — a funny moment for Ed’s character. The other is when Ed has a moment of clarity and realizes the seriousness of the crime they committed and suggests they should end their marriage.

As for Cage, where do I begin? Cage excels in this film as a man who consistently has this monotonous cadence to his speech. Although Hi isn’t a college graduate, he certainly sounds like one with his poetic narration in voiceover. However, what really paid off was the method he used to channel his performance. Believe it or not, he channeled the popular animated character Woody Woodpecker. In a New York Times interview, he says, “Perhaps there was confusion about where I was going, but the Coen brothers went along. They didn’t mind that I was channeling Woody Woodpecker.” The actor added that he knew his cartoonish behavior would play well.

During the shoplifting scene, while robbing a convenience store for Huggies, he points a gun at the store clerk, and while asking for money, he bobs his head back and forth as a woodpecker would do.

There’s also the scene when Glen’s son uses a water gun on Hi and sprays his crotch area. He says, “He wet himself, he wet himself, Mr. McDonnough wet himself, Daddy!” Cage looks up expressionless, drinks his beer, and resumes the conversation as if nothing happened. The reaction alone always gets a laugh. Sometimes comedy can also be the lack of a reaction that can be just as humorous as an overtone. Cage does that well in several scenes of Raising Arizona.

Performances aside, the kooky cinematography from Barry Sonnefeld adds a lot of character to this zany comedy. It’s also quite impressive, especially the scene after Hi steals Huggies from the store and is being chased by law enforcement. When we see the camera from Nathan Jr.’s perspective shake up and down as Florence Arizona (Lynne Kitei) comforts Nathan Jr. by bobbing him up and down. Great stuff.

The music, of course, is classic and has become just as legendary as the movie itself. Carter Burwell’s sprightly banjo and the yodeling-centric score defined this as a Cohen brothers’ film. We hear this score playing in the background with whistles and banjo-picking before we get to the title sequence, which is 11-minutes into the film.

There’s so much more to be said about this classic which, is beyond cult status. On AFI’s 100 Years … 100 Laughs, a list of the top 100 funniest movies in American cinema, Raising Arizona ranks #31.

You can stream Raising Arizona on Prime Video or Apple TV+.