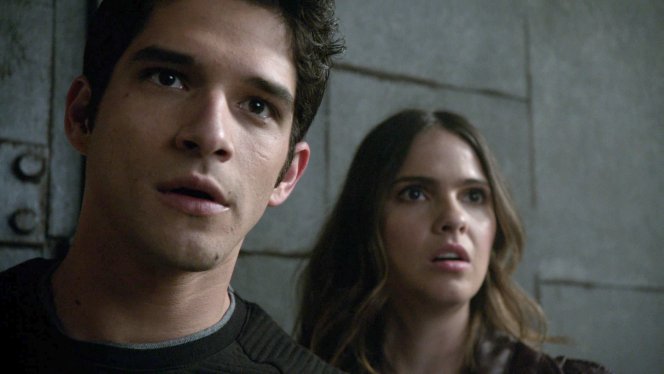 Just when you thought Teen Wolf couldn’t get any realer…

This episode of Teen Wolf introduces us to a reality where students “test” other students to see if they are supernatural creatures. Unfortunately one of the students doing the testing is a shape shifter that amplifies people’s fears. It’s interesting seeing how Tamora’s leadership has changed the energy at the school. Now there’s a small group of students terrorizing others with her encouragement.

But once we see the horror taking place at Beacon Hill High School, the focus shifts to Scott’s pack. It looks like they have a plan to trap the hunters in at the zoo, which is permanently closed. It’s tough to really understand what their plan is, but it’s clear what Gerard’s plan is. He wants to kill Liam to cripple Scott and break up his pack. It definitely looked like Scott, Melia, Liam and Theo have unintentionally walked into a trap while trying to set their own.

Scott and Malia end up trapped in a steel room with the air being sucked out of it. Liam and Theo end up confronting Nolan and dealing with Liam’s heightened anger. It was a very close call for both of them. Lydia got to use her banshee powers to break down the door to the room holding Scott and Melia. Theo came through for Liam and stopped him from killing Nolan and from being killed by Gerard and his crew.

I’m so glad that Gerard kept it all the way 100 with Tamora about his loyalty to her. He may be training her to be a hunter, but he is not her mentor. I hope she takes his words to heart, because he tried to kill his own son. He has no love for anyone that will get in the way of his worldwide vision for the eradication of supernatural people. He may have given everyone in the town free guns, but only because it supports his cause. It was already real and raw out in those Beacon Hill streets for the supernatural residents. Now it just got even more serious with a spray of gunfire into Scott’s house causing everyone to duck for cover. The episode ends with us seeing that Malia has been shot, but not before she and Scott share a kiss.

Whew…in between small glimpses of hope, things have continued to get pretty bad for the wolf pack. I can’t imagine there being a resolution without the violence against humans that Scott has been trying to avoid.

Next week’s episode of Teen Wolf promises to be good for several reasons. The tension in Beacon Hills continues to rise, and Jackson returns. He’s with Ethan, and they’re a couple. Considering that Jackson was pretty hot and heavy with Lydia before he left, I’m interested in seeing how that happened. But I’m mainly happy to see that Jackson is returning. He’s on my personal wish list if characters to come back before the finale.

Who do you want to see before Teen Wolf wraps things up?