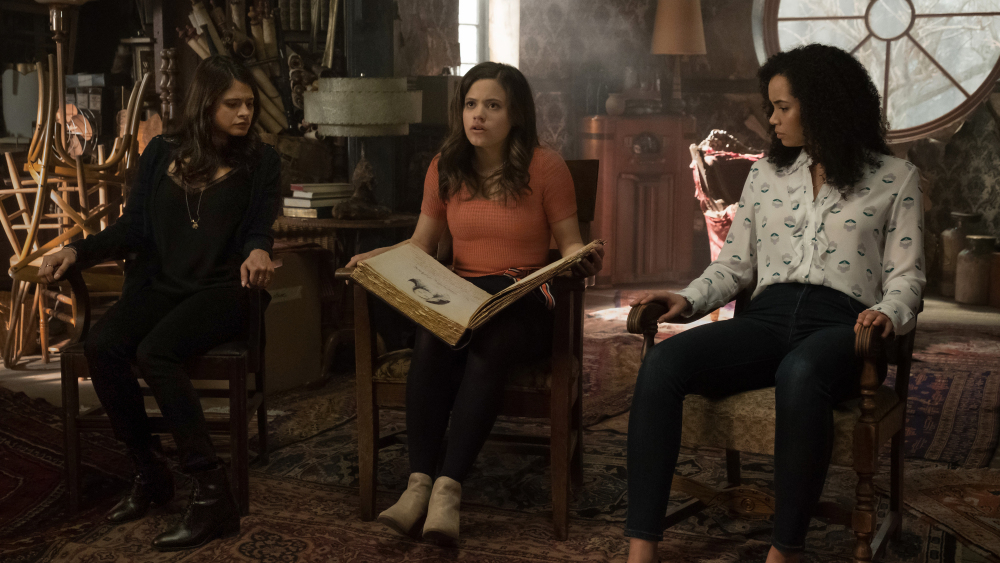 “It’s not a witch hunt. It’s a reckoning,” says the head of Hilltowne University’s gender studies department Marisol Vera (Valerie Cruz) about sexual harassment allegations against predator Professor Thaine (Robert Pine). It’s from that first line that the CW’s magical Charmed reboot situates itself right smack into our world as we dive into this new telling of the Charmed Ones, a trio of the most powerful witches who fight demons and other evil forces.

Melanie Vera (Melonie Diaz) is a graduate student at Hilltowne University writing her dissertation on the future of intersectional feminism. Her younger sister Maggie (Sarah Jeffery) is a freshman whose initial focus is the Greek system rather than her studies, an endeavor that gets lots of eye-rolls from her sister. Macy Vaughn (Madeleine Mantock) is a geneticist who recently joined Hilltowne University as a researcher. After Marisol’s suspicious death, Macy finds out that Marisol Vera is her mother and that she has two younger sisters.

The new head of the gender studies department, Harry Greenwood (Rupert Evans), turns out to be a magical being: a Whitelighter who serves as counsel to the Charmed Ones. His new charges are the three witches Mel, Maggie, and Macy, as their powers have finally been unbound through their mom’s death in order to stop the end of the world. Mel has the ability to stop time, but only if she can control her anger. Macy is telekinetic and uses her science wiles to assist in magical events. Maggie is telepathic and an empath who must learn to trust her own voice amid all the others in her head. After all, empathy is the most powerful and vital tool any witch can have — once you can properly control it. 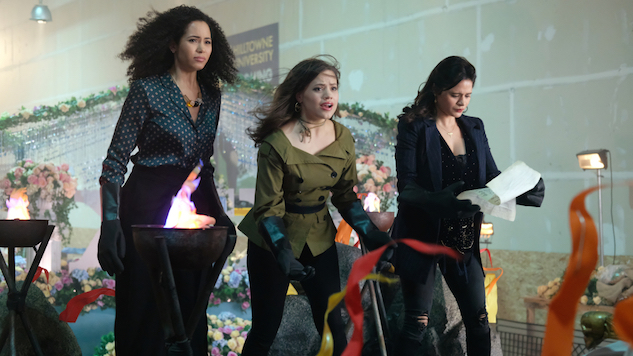 The university setting for this new version of a diverse and representative Charmed makes the social justice commentary and banter anything but performative, like it is in The Chilling Adventures of Sabrina. And the excellent writing by head writers Jessica O’Toole, Amy Rardin, and Jennie Snyder Urman continues to situate Charmed into our current sociopolitical climate even as the Charmed Ones battle a variety of monsters, demons, spirits, and other supernatural creatures in each episode. Harry even goes so far as to say that our current president was one of the main signs of the impending apocalypse that the three sisters are now tasked with averting. High fives all around.

But not all is smooth sailing as Mel, Maggie, and Macy adjust to their new reality not just as witches, but as sisters. Macy struggles to negotiate her mother’s beloved and now-martyr status with the fact that Marisol abandoned her as a baby. Mel and Maggie are already a well-formed unit and have a hard time letting go of their mother to make room for Macy in their home and lives. Sisterhood is not always easy. Adding so much else to the mix brings another dose of reality into the enchantment that is Charmed.

This Charmed is the socially conscious witch story I have waited my entire life to see. The fact that the witches are also women of color isn’t icing or a cherry on the cake — it’s an entire new cake on top. It may sound extra, but it isn’t.

Like Siren earlier this year, Charmed weaves us in and out of reality and magic with story arcs and sub-plots that naturally reflect a diverse cast that mainly features Black and Brown characters. White folks, for once, are in the minority and often playing villains. The Sarcana, a rogue group of witches, are also majority women of color, as are the Council of Elders even though we don’t even see their faces. Due to its diverse cast, this show also has the opportunity to bring in different kinds of magic like Yoruba and Santería that in another context would be considered cultural appropriation.

Macy and her friend Galvin (Ser’Darius Blain) are two of the best scientists in their lab, and they get that recognition actively. When Macy gets promoted, Galvin says, “I’m all for some badass ladies taking over to right the ship. It’s about damn time.” It made my heart sing seeing these two strong Black leads in the STEM environment that still woefully underrepresents Black folks. Like Hidden Figures, Charmed helps fill a huge gap in this particular kind of visual media representation. 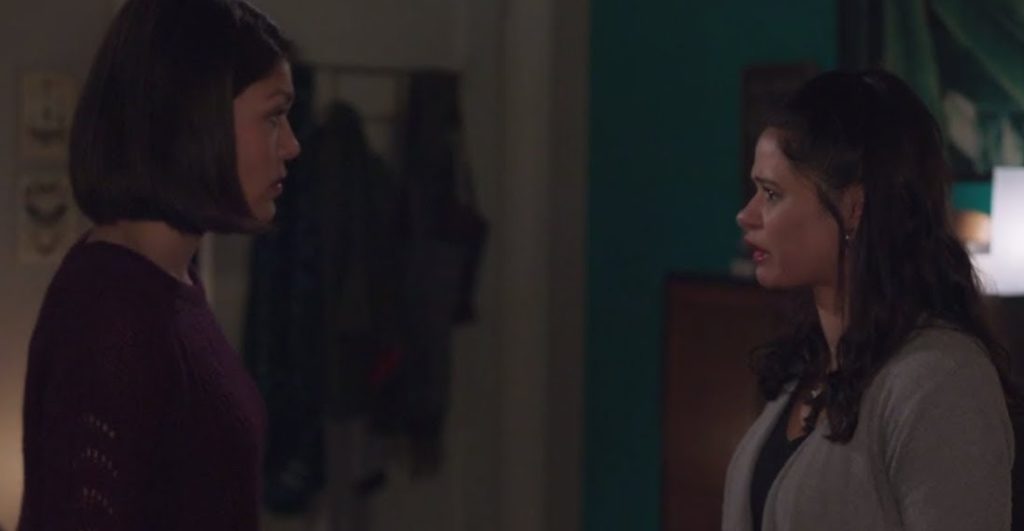 Mel’s queerness isn’t at all presented as a check off the diversity list, not even a little bit. Her relationship with Detective Niko Hamada (Ellen Tamaki) is complicated and passionate — one of the best three-dimensional portrayals of a same-sex partnership I’ve seen this year.

And because the social justice language is not performative in the least, the writers have many opportunities for tongue-in-cheek moments of comedy amid the seriousness of the issue. In episode 6, “Kappa Spirit,” there is a vengeful ghost haunting one of Maggie’s estranged sorority sisters. “There’s a problem at Kappa!” Maggie screams at Mel, asking for help. “Yeah, they’ve internalized the patriarchy for starters,” Mel snarks back. These moments bring so much life and light to each episode, even among the dark themes. This is not the only episode that talks about how the university system covers up on-campus crimes, an issue that continues to be in the news as Betsy DeVos in particular has removed Title IX protections for students raped by their classmates.

One of the most poignant developments in this new Charmed is how Macy combines her knowledge of science to solve magical problems. From the composition of demons to the magnetic properties of enchanted objects, Macy brings a different kind of reality to this fantasy show that really goes straight to my heart. This aspect is especially relevant because we are living in a political regime in the U.S. that has basically declared it does not believe in science. 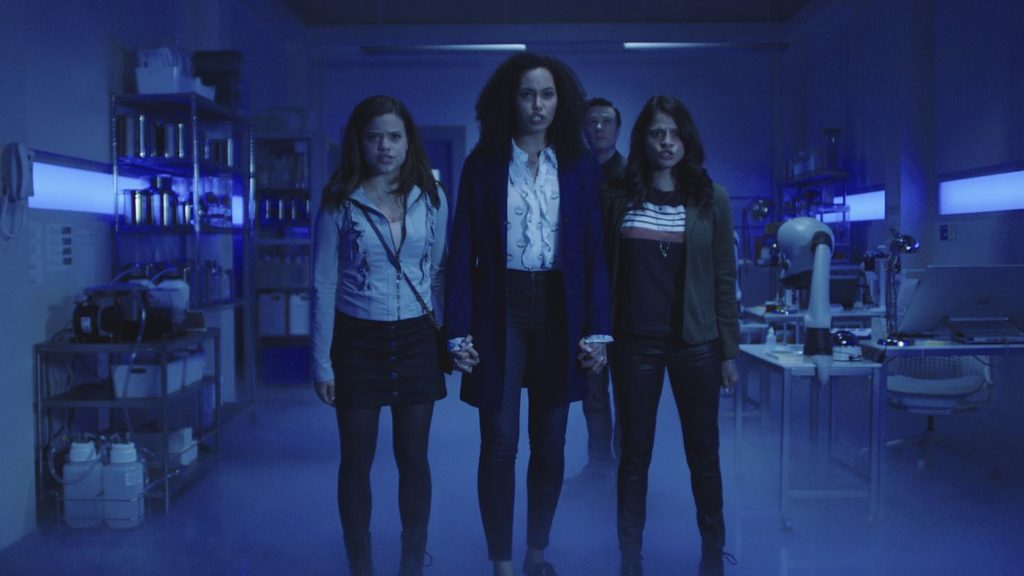 Charmed is openly feminist, and this is one on an ever-growing list of reasons to love this show more and more. But that said, like Claws, these women are messy and sometimes forget to be on each other’s team, pitting women against each other. Nobody is perfectly woke, and even the best feminists are bad sometimes.

Some original Charmed fans might take issue with how the reboot has reshuffled some of the characters and themes from the ’90s version. For me, I think they’ve done a much better job in the new Charmed articulating the various hybridities at play here, from race to magical ability to interspecies relationships. There are many mixies in the new Charmed — Afro-Latina Macy, Haitian-Dominican Galvin, half-human half-Whitelighter Jada (Aleysa Shannon), and half-demon half-human Parker (Nick Hargrove). The blended cast only makes this version more real to me. I’ve never seen Brown witches like me before, and Mel and I even look similar if I still had a full head of hair. I cried so much during the first few episodes as I saw something I’ve wished for my entire life. Once again, representation is not only vital, it is healing.

From harbingers to hellquakes, satyrs to scythes, Charmed is a delightful romp into the diverse witchy world most of us never imagined we’d ever get to see on screen. Charmed returns to the CW on January 20, 2019, and it’s already my highlight of the new year.