This past weekend, the Google Tech + Entertainment Mashup Showcase gave grown-up lessons to kids looking to learn about tech.

The afternoon included a keynote speaker, panel, and a sneak peek at Google’s digital series GODCOMPLX, with the cast, and ended with a dance performance that sent the attendees on to breakout sessions in virtual reality, filmmaking, and coding. 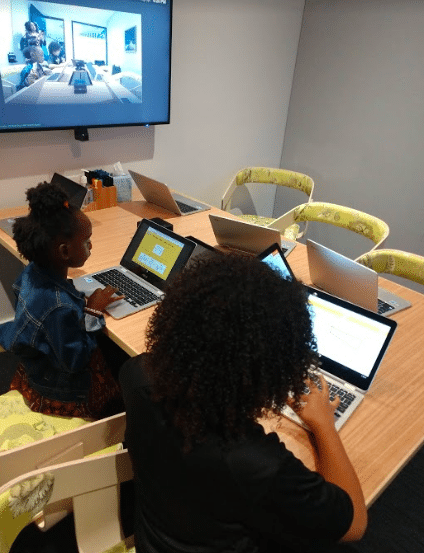 Designed as a celebration of inclusion in tech, the first ever Tech + Entertainment Mashup Showcase definitely hit its mark. With over 100 of LA’s diverse youth and their families in attendance, the event was highly inspiring and educational for all.

Presented by Google Entertainment and Executive Producer Claire Brown (Being Mary Jane, The Game), the interactive showcase was a Computer Science in Media initiative held at the tech giant’s swanky Spruce Goose Hangar in Los Angeles. With high-tech audio, stage lighting in Google’s signature colors and a state-of-the-art projection to boot, the kids were exposed to a first-rate venue set up just for them.

Seventeen-year-old keynote speaker, filmmaker Aniya Wolfe sauntered to the stage with a supernatural kind of confidence to kick off the event. This girl doesn’t play! Dressed in a gorgeous, fitted burnt-orange jumper hand-made by a young designer who reached out to her Instagram (and was also in attendance), Wolfe was beyond powerful.

“If you see it, you can be it,” Wolfe said with a huge smile as she Power-Pointed her way through slides of her short film projects, one of which became an award-winning feature film, Beyond My Skin that she began developing when she was just fifteen. Using technology to build community, sticking to your dreams, and being prepared for change were some of the main points to her flow.

“Technology is an extended effect of our being,” Wolfe also explained in her soothing voice. “We are given these tools for constructing and deconstructing diversity; we must use it to speak for ourselves.” This nugget of knowledge dropped so effortlessly and poignantly really solidified the truth that we all — no matter our technological knowledge, or access to the newest and greatest tech — have a responsibility to protect our image by telling our own stories.

If Wolfe was any kind of an appetizer to the day that was meant to fill the bellies and minds of youth with a plate of, “I can!”, the influencer panel served after her was a gourmet helping of it.

Moderator Daraiha Greene (Google’s Global Head of Strategic Partnerships, Community Inclusion), shined brightly in the role as she effortlessly switched between inspiring the kids with “Never forget who you are!” quotes to efficiently querying her guests.

Some of the stand-out moments included when Greene asked the panel, “What sets you apart from the pack and how intentional about that are you?” Waithe, who self-describes as Black and queer, dropped the mic with, “I’m a person who is always other’d.” Speaking in that classic measured tone that captivates those lucky enough to hear it live, she schooled, “I’m a part of groups that continue to be marginalized, yet we all deal with the same issues.” She referred to her Emmy-award-winning Master of None episode “Thanksgiving”; she said, “You don’t have to be gay to feel like a stranger at the dinner table.”

Charming Nyle DiMarco, (who has been deaf since birth and whose entire family is deaf, including some grandparents), was incredibly inspiring in his deliberate openness about representing for his community. When Greene asked the panel, “Given what you know now, what do you wish you’d done back then as a kid?” DiMarco said through a sign-language interpreter, “During middle school, I wish I’d learned to code.” He further explained that if he had, then maybe he could have created an app that gave deaf people access to the deaf. Boom! coding became extra real for everyone.

Before Valeisha Butterfield Jones got to Google, she worked earlier in her career with then Senator Barack Obama as National Vote Director; she laughed, “Once he became president, it was good for him, but I was out of a job!” She said this was an inspiration to nurture her passion to make a difference for others via a top-executive position. When Greene asked, “What was the best career-lesson learned?” Jones, a mother whose son was in attendance, said: “Obama taught me, ‘Never be too big for the small jobs’.” With sophisticated poise, she challenged the kids to “always stay humble and keep their feet on the ground.”

When Greene asked the panel, “What early habits did you adopt that made you successful?” The very cool Kim Swennon, an actor-turned tech engineering Goddess, gave great advice with, “Science teaches you to keep digging, something will always make sense. Just keep digging.” This was her way of telling the audience to never, ever give up.

Kids took note in their own techy journalistic way, which meant using Insta to capture key moments to flash-broadcast to the world. And when they asked honest questions to Nyle like, “Do you ever feel not good enough” and to Lena, “Have you ever not been goal oriented?” there wasn’t a dry eye in the place. The message had landed, yes, there will be hard times and good times in life, especially when “other’d”, but keep going no matter what you look like.

Karen Gist (Showrunner of FOX’s Star, Executive Producer, Grey’s Anatomy) lead the fireside chat with the rising-star cast of the Google-funded series GodComplx about a group of young entrepreneurs living together in Los Angeles who must navigate lessons of love, life and their careers in the tech field. Wowed with a sneak-peak at Season 2, which highlighted a character experiencing blindness, the show screams diversity inclusion with a multicultural cast, staff and female African-American directors – three of whom were in attendance, the young dynamo Aniya Wolfe, Morenike Joela (Director Sexless, Netflix’s Family Reunion) and Tracy “Twinkie” Byrd (Director, Casting Director Being Mary Jane). 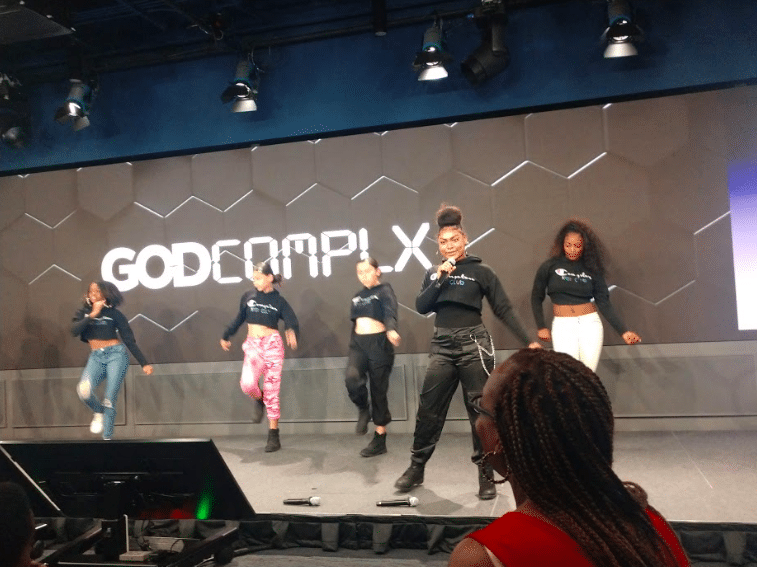 The timing was perfect when the eight young women from the Compton Kidz Club stormed the stage performing like Bey to self-written and produced tracks post-talks. The audience was on their feet cheering and supporting this fab display of energetic girl power.

The teen Girls Make Beats DJs closed out the event that led to breakout sessions where kids tried their hands at coding and jumped into virtual reality and augmented reality with tech equipment provided by YouTube and The Far Sight. 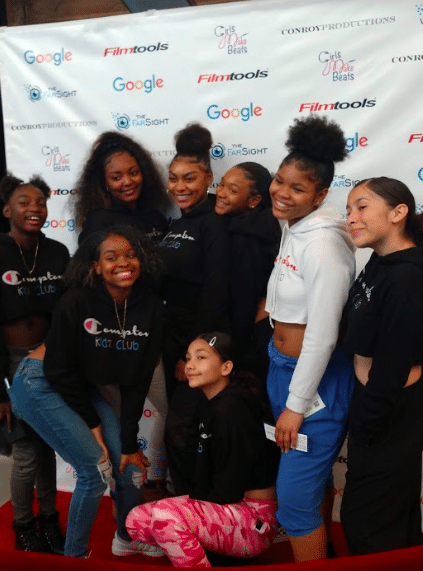 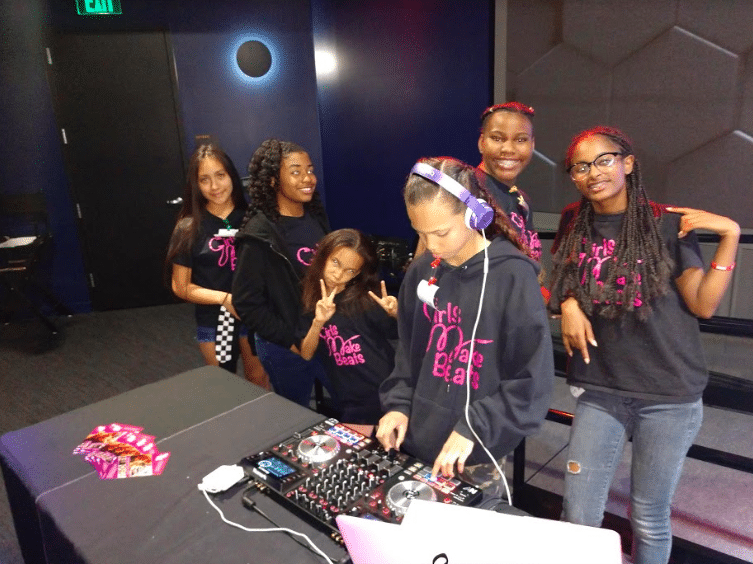 For the bright-eyed young to the open-eyed older, this mashup was a bona fide A+. It showed us the future and the vast possibility of now. It reminded that a cell phone is a gadget that can take you out of this world. And it humbled by keeping it real, which allowed everyone the opportunity to plug in and connect.

Doodle for Google Contest for Girls of Color