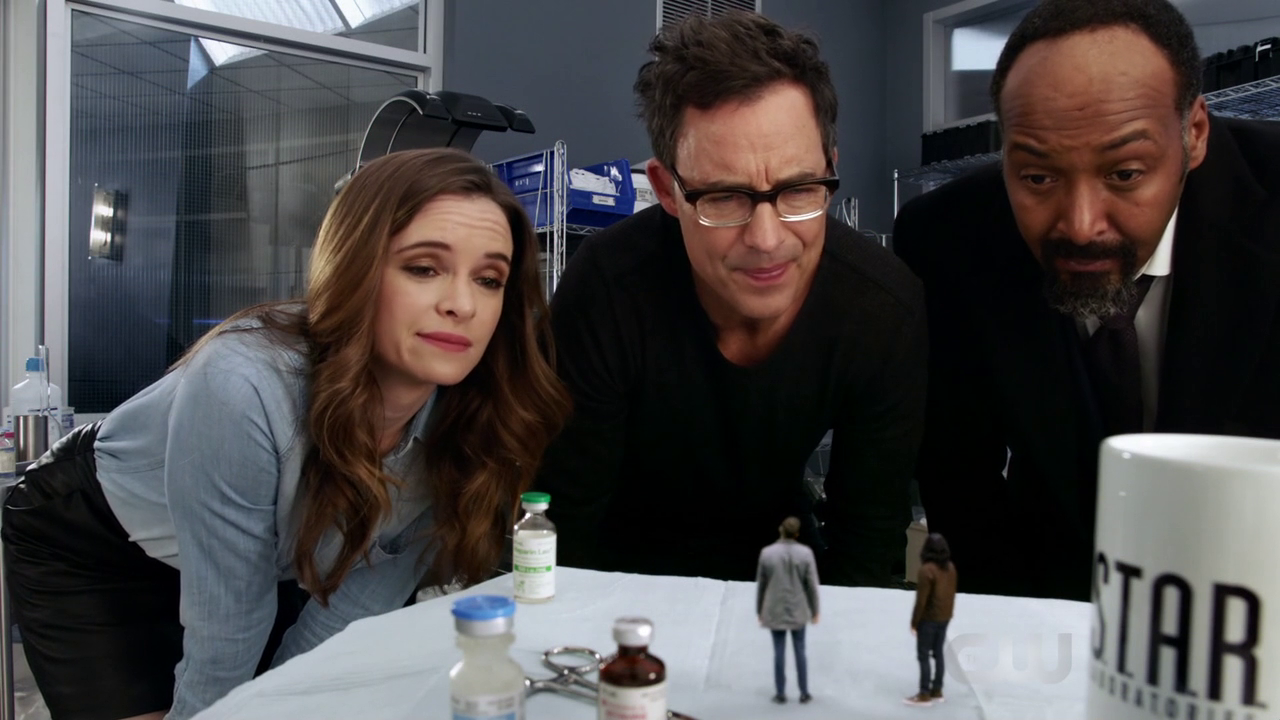 The Flash excels when it takes breaks from serializing story arcs. Unfortunately, some of its arcs can weigh heavily on the series’ characters, and in my opinion, hinders their ability to shine. In the latest episode of The Flash titled, “Honey, I Shrunk Team Flash,” the show takes a break from the DeVoe storyline and instead injected some humor into the narrative. Additionally, the episode gave characters that are typically peripheral the chance to shine. Attorney Cecile Horton, played by Danielle Nicolet, was one of these characters.

In this episode of the scarlet speedster series, Cecile develops the ability to read minds, a side effect of her pregnancy and her previous exposure to dark matter (from the first particle accelerator incident from Season One of the series). Cecile’s newfound abilities bring a fun and interesting dynamic to the show, a dynamic that was present in this season’s premiere, but has since faded away, replaced by somewhat less interesting storylines and character developments (yes, I’m referring to you, Dibny!).

Focusing on smaller issues and bringing some fun back into the show was a smart move by the Flash writers. This move to provide screen time to underutilized characters such as Cecile, as well as adding comedy is much welcomed. Sure, DeVoe’s whole storyline will have to come to a conclusion at some point and will ultimately be dark and depressing, but for now, these tidbits of Flash joy are much needed. Here are some highlights from “Honey, I Shrunk Team Flash!”

Cecile is a Meta-human, well sort of…

While Cecile is enjoying a healthy pregnancy, she still has some concerns about being an older mom. Between her body changing and feeling intimidated by what people will think about her starting a young family again, Cecile leans on Joe West for support. It’s during one of their interactions that Cecile realizes that she can read her partner’s thoughts and discovers, after a workup at Star Labs by Caitlin Snow, that she has developed a pregnancy induced meta-power. For the rest of the episode, Cecile reads people’s minds and comments on their thoughts accordingly. Between the moments where she scolds Cisco for thinking about Pokémon during crises and finishing Iris’ sentences, these meta-induced moments are pretty darn comedic and was a pleasant surprise from Nicolet who apparently has great comedic chops.

With her temporary powers (they will go away after she gives birth), Cecile tries to get closer to Joe by reading his every thought. This, of course, pushes him away, creating a bit of tension in their relationship and results in a “pink elephant” scene that is pretty funny. By the end of the episode, the two work out their issues and Cecile realizes that she doesn’t need to read Joe’s mind to get closer to him, she just needs to trust his feelings for her. Aww.

Dibny and Cisco are two inches tall and talk like chipmunks 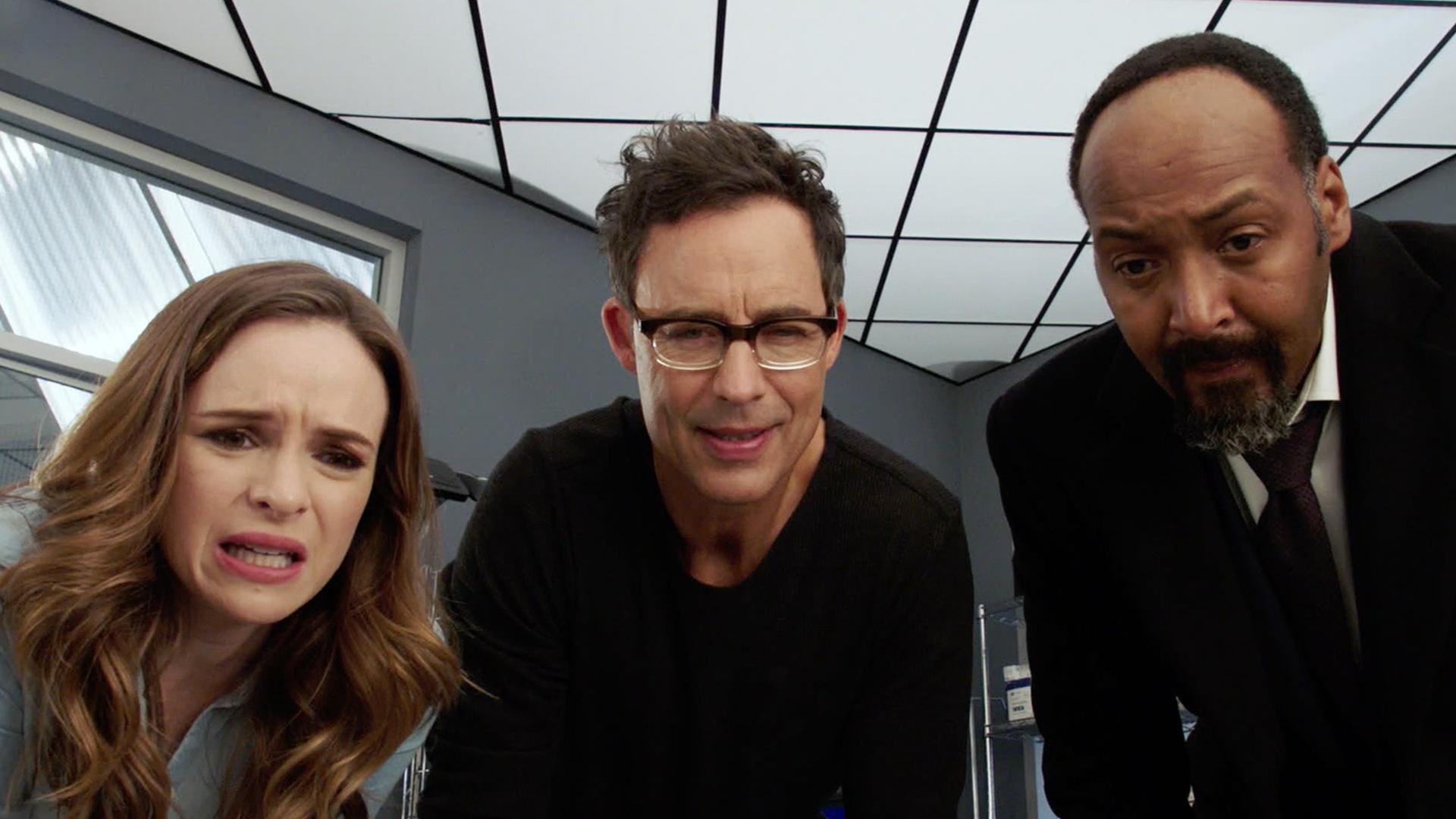 Team Flash is stressed. They’ve hit a wall when it comes to trying to find a way to free Barry from prison legally. And on top of all that, they still have to protect Central City from its weekly supervillains.

Harrison Wells spends most of the episode frustrated that he can’t use his genius to figure out how DeVoe framed Barry and he takes his frustrations out on the team. Everyone feels overwhelmed by their tasks, all believing that Barry is languishing in prison. Except Barry is doing just fine, thank you very much. He has a friend in Big Sir, cheats at cards by using his speedster abilities, and is downright cheerful. It’s during his socialization with some of his inmate buddies that Barry finds out that Big Sir was sent to jail when he was mistaken for someone else. The hero in Barry wants to help his friend, and thus he puts Team Flash on the case.

Cisco, Dibny, and Joe track down a suspect in Big Sir’s case. The man is Sylbert, a thieft with an impressive collection of miniatures (or so they seem). When Cisco, Dibny, and Joe visit Sylbert’s apartment to question him, they fail to realize that he is a meta-human with shrinking abilities. When their line of questioning tips Sylbert off, a short fight ensues, ending with Dibny and Cisco shrunk down to about two inches. Sylbert escapes and Joe takes his friends back to Star Labs to see what Caitlin Snow and Harrison Wells can do about their situation. Hilarity ensues as Dibny and Cisco shout at their teammates in high Alvin the Chipmunk voices. Their powers are all messed up too and the two frenemies spend much of the episode hanging in the Lego diorama Cisco made last season.

I got a few good laughs out of this scene, and there was an especially satisfying moment where Dibny is peeled off of Iris’ shoe (I really feel like she stepped on him on purpose). By the end of the episode, Team Flash figures out how to return Cisco and Dibny to their normal size, and Iris, armed with their meta-human gun and a white Olivia Pope-inspired coat, takes Sylbert down. Iris always excels when she’s part of the action, so thanks, Flash writers for letting her have a bit of the fun.

Barry is TERRIBLE at keeping his identity a secret.

Barry made a promise to Big Sir at the beginning of the episode to get him out of prison. Convinced that Sylbert would confess to the murder Big Sir was charged with, Barry is ever the optimist while his friend tries his best not to get his hopes up. When Sylbert refuses to confess after his capture by Iris and the gang, Barry informs his friend that his plan didn’t work and that he has to remain in prison. Of course, Barry has no intention of letting Big Sir spend the rest of his days in Iron Heights. So, after checking to see if the prison camera outside his cell isn’t trained on his cell, Barry Speeds Big Sir to a small village in China.

When Barry returns to his cell, the prison warden drugs him and informs him that a hidden camera is installed in his cell. As Barry feels the effects of the drug, the warden informs him that he knows that he is the Flash. An unconscious Barry is then removed from Iron Heights and is placed in a special holding cell and the prison warden calls supervillain Amunet to let her know about his discovery.

Barry Allen needs to do better. This many people finding out his identity is just no good. He might as well have revealed his identity at his trial. At least he’d be home with Iris, saving the city from the DeVoes and their unknown plans. Lord.