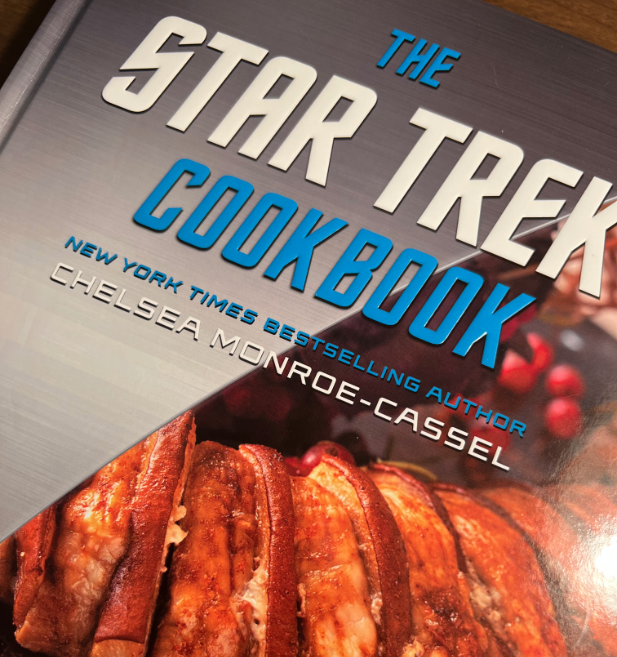 This cookbook is an updated version of the classic original Star Trek cookbook written in the 1980s by Ethan Phillips and William J. Birnes. Monroe-Cassel has updated the cookbook with recipes that fit the diverse eating styles of today with a twenty-fourth-century flair.

The author has a history of combining her love of fantasy with her love of food. Her popular Game of Thrones-inspired food blog, Inn at the Crossroads, inspired publishers to choose Chelsea Monroe-Cassel to write the best-selling A Feast of Ice and Fire: The Official Game of Thrones Companion Cookbook.

The Star Trek Cookbook is a delightfully clever, easy-to-follow cookbook with yummy fun to make recipes for the entire family. The cookbook is aesthetically beautiful. Not only did Chelsea Monroe-Cassel update and create new recipes, but she also photographed and food styled the book exquisitely.

The cookbook has an easy-to-follow structure, and the recipes are broken down into seven chapters that make perfect sense. Individually, the recipes are so easy that anyone can follow them and feel like an expert in the kitchen. Each recipe comes from a different film or TV show from the Star Trek universe’s timeline and is derived from a specific culture from the Star Trek canon.

The Risans look like humans but have a round silver button-like ornament on their foreheads. Their planet’s focus is a pleasure. Fettran sauce is a lovely expression of flavor in a sauce that can be made to be savory or sweet. I made the savory version and used it to prepare shrimp and vegetables that were simply outstanding. Each sauce recipe consists of just three ingredients and takes fifteen minutes to prepare.

Greenbread was hands down my favorite recipe. This cookbook is a baker’s delight. I love baking but rarely take the time to do it when I can just go to my favorite bakery when I get the urge. But Greenbread rocked my world. The bread is green, not from food coloring; no, my friend. Chelsea Monroe-Cassel uses frozen peas to create this otherworldly-looking loaf. The prep time is five minutes, and the cook time is just two minutes! The result, a light soft fluffy bread, when topped with any kind of butter, will melt in your mouth. If you have kids who aren’t fond of veggies, you can sneak in the veggies through this tasty treat.

Plomeek soup is a wonderful reflection of the Star Trek world come to life in the kitchen. The plomeek plant is native to Vulcan, and this recipe’s description tells a compelling story of how the fruit of the plomeek plant is harvested and its place in Vulcan cuisine. I love the fruit blend of this soup, and it’s able to be served either hot or cold. Lovely for hot or cold weather.

I’ve never made chocolate bread, so why have I never had this magic in my life before? Makapa bread has a crunchy crust and a soft middle. It reminds me of a softer version of biscotti, perfect for afternoon tea. This recipe isn’t for you if you’re not a fan of chocolate. But if you are, make Makapa Bread this fall to get your hygge on.

Katterpod Noodle Bowl has a fantastic blend of full-fat coconut milk, Thai red curry paste, creamy peanut butter, soba noodles, and chickpeas that is simply delicious. From the noodles to the chickpeas, this noodle bowl is packed with protein, veggies, and flavor and takes just five minutes to prepare with a twenty-minute cook time. The dish is filling, and the flavor profile is savory and just feels nourishing. The Katterpod Noodle Bowl proves that vegan recipes don’t have to be boring and flavorless.

Denobulan Sausages are simple. Anyone can make this recipe, which can be made with animal protein or plant-based sausages. The glaze has this heavenly blend of sweet and savory that blends perfectly. The secret to these sausages is that they are hot dogs dressed up to be otherworldly. You don’t have to break your budget to have a dinner that engages your imagination.

This recipe wasn’t quite my taste but gets high points for creativity. The sauce is a spinach feta cheese pesto with veggies on noodles, but the recipe doesn’t have much flavor on its own. If you try this one, I recommend adding your own spices and adding salt because on its own, this recipe was bland.

The Star Trek Cookbook: Culinary Adventures in the Final Frontier is fantastic; even the book’s construction is convenient. It opens flat on the counter, and the pages stay open so you can easily look at the recipe as you’re cooking without having to use anything to keep the pages flat.

In the foreword, Chelsea Monroe-Cassel describes herself as a Gastrodiplomat for the Federation. She has named herself perfectly, and she doesn’t forget to include beverages, hot and cold, alcoholic and non-alcoholic.

If you’re having a Star Trek-themed party, the cookbook ends with a few pages of menu suggestions that make planning easy. The most surprising aspect of this cookbook is how it makes baking easy. Ktarian Chocolate Puffs, Meringue Drops, and Trixian Bubble Candy are all items that can bring some fun into the kitchen. The Delvan Fluff Pastry is a chameleon recipe for baking and was used in several recipes in the cookbook. I’ve always been a little intimidated by puff pastry, but this recipe was simple and works! This recipe is a dream.

If you’re a caregiver of any kind, to anyone, cooking can be a slog. As I made each recipe, I read the story behind the food from the Star Trek universe, and as I cooked, it set my imagination free. The kitchen is one place where the result will be delicious if you follow the directions exactly. Connecting to worlds beyond my reality as I cook makes life a little sweeter.

The Star Trek Cookbook: Culinary Adventures in the Final Frontier brings ease, creativity, and joy to the kitchen, allowing foodies of all ages to boldly take their culinary skills to new levels of Starfleet excellence.

The Star Trek Cookbook Culinary Adventures in the Final Frontier is on sale September 20, 2022.