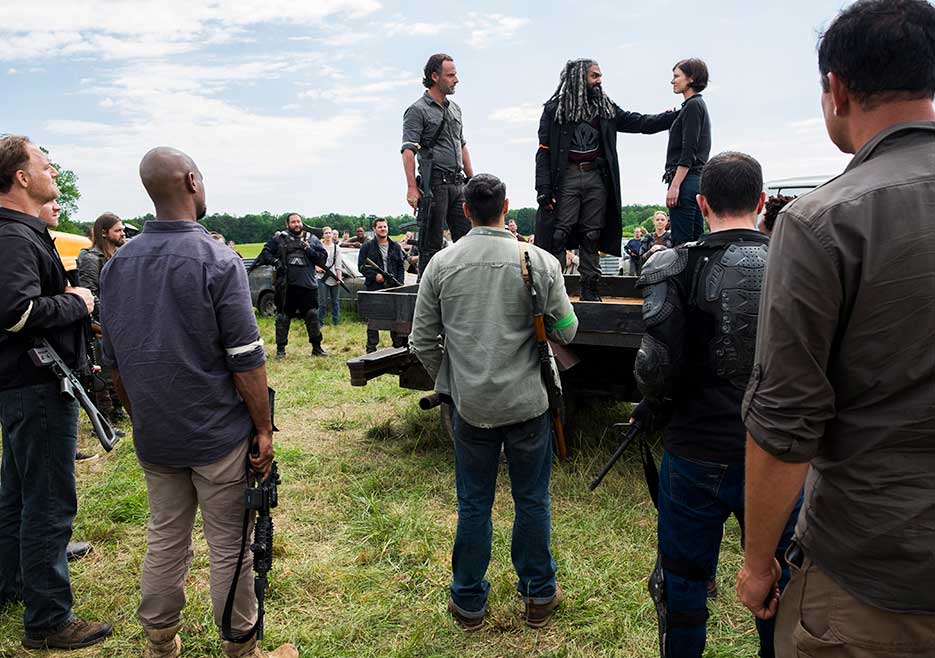 AMC’s The Walking Dead is finally back for its eighth season and I couldn’t be happier. With its 100th episode, titled ‘Mercy,’ The Walking Dead kicks off what promises to be a season filled with tension, angst, and bullets, lots of them.

“Mercy” opens with members of the three communities — Alexandria, Hilltop and The Kingdom — standing together as Rick prepares them for war against the Saviors. He tells them the world is theirs by right and for anyone who wants to live in “peace and fairness.” Ezekiel and Maggie remind them that as long as they have the same goal, and faith in each other, the world will be theirs. As this scene is playing out, there are brief location changes to Carol and Tara waiting on a bridge, and Daryl and Dwight exchanging messages via crossbow express.

From this opening sequence, I knew this season was going to be different. I became filled with tension and worry for these characters I have grown to love over the last seven years. Even though many of my favorites have died, (pour one out for Beth, Herschel, and Tyrese) the way Glenn and Abraham died makes me cling to my love of the remaining members of Team Family even more fiercely. Even when they win this war with Negan and his Neganites, I know the family will never be the same, because I know more pain and loss is inevitable.

While Rick and the army prepare for their first planned attack against the saviors, Carl is on a supply run to collect gas, when suddenly he hears a voice asking for food. The man quotes a passage from the Quran, “May my mercy prevail over my wrath,” that his mother used to recite, and immediately admits he shouldn’t have said it. Initially, I didn’t really pay attention to that line, but in my second viewing, it gave me pause for two reasons: 1. This new character would be the show’s first male Muslim, and 2. Even in the apocalypse people are afraid to admit that they are Muslim for fear of retaliation. The world has literally gone to ruin, but people are still afraid of religious persecution, and I found that to be quite sad.

Back at Alexandria, we see Michonne for the first time and I squealed because my girl was wearing her man’s shirt when he gives her a kiss goodbye (oh be still my shipper heart). With a forlorn expression, Michonne watches Rick drive away and admits to Carl she wants to go with him, but “everything hurts.” When Michonne made this comment, I got the feeling she was referring to more than her physical pain, I believe she was talking about being mentally tired also. From the moment they were forced from the prison the family has been struggling to survive, but just when they found safety in comes Negan with his bat wreaking havoc. Michonne is tired, they’re all tired and just want this fight to be over so they can live in peace. 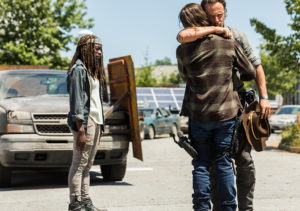 When Rick’s army reaches the Savior’s hideout, Negan comes out to give one of his extremely verbose, annoyingly condescending speeches and I roll my eyes, as usual, because I really CAN’T stand leanin’ Negan and his monologues. I’ve reached the point where just seeing him annoys me. He calls out Gregory, who declares that the Hilltop stands with Negan (LMAO). If Negan was as smart as he thinks he is, he’d know the people at Hilltop have little to no respect for Gregory, and Jesus proves this when he lets Negan know in no uncertain terms “the Hilltop stands with Maggie.” Suck on that Negan.

After shooting out the windows of the factory, the RV is crashed into the front and exploded. Soon, I understood — they took out the windows so the smoke from the explosion could enter the building, forcing everyone inside to come out. Why would Rick and crew want to force out Negan’s people you ask? Why, so the horde of walkers diverted by Carol, Morgan, and Daryl has something to feed on, of course. But alas there is one kink in the plan, Father Gabriel (deep sigh). Just as Gabriel was driving away from the factory, he spotted Gregory calling for help and, instead of leaving him, Gabriel goes to help him. Of course, that lily-livered traitorous douche bag steals Gabriel’s car, leaving him trapped with Negan.

At the end, it goes back to Rick standing on the truck bed, culminating his speech with a declaration that they’ve “already won,” and to that, I say, “Huh?” Was everything we saw a dream sequence? Was it a look to the future? Aas it a flashback? In all honesty, the way the episode ended left me feeling a bit confused. Yes, overall it delivered on the excitement, but in some areas, it fell just a bit flat. The flashforwards of “old man Rick” were interwoven with images of Rick in an almost delirious state, where he seems to be injured and reciting the quote from the Quran. To me, these changes in time made the episode feel a bit unbalanced, preventing it from flowing smoothly from one scene to the next, which is something I haven’t experienced since season 5.

Despite my quibbles with this episode, I’m still happy to see Team Family back on my television, I’ve missed the affection and respect they have for each other. No matter what comes I’m in this for the long haul, as long as Negan bites the dust.

A Little Something Extra

The Walking Dead airs every Sunday on AMC at 9/8c. Here’s a sneak peak for next week’s episode “The Damned”.