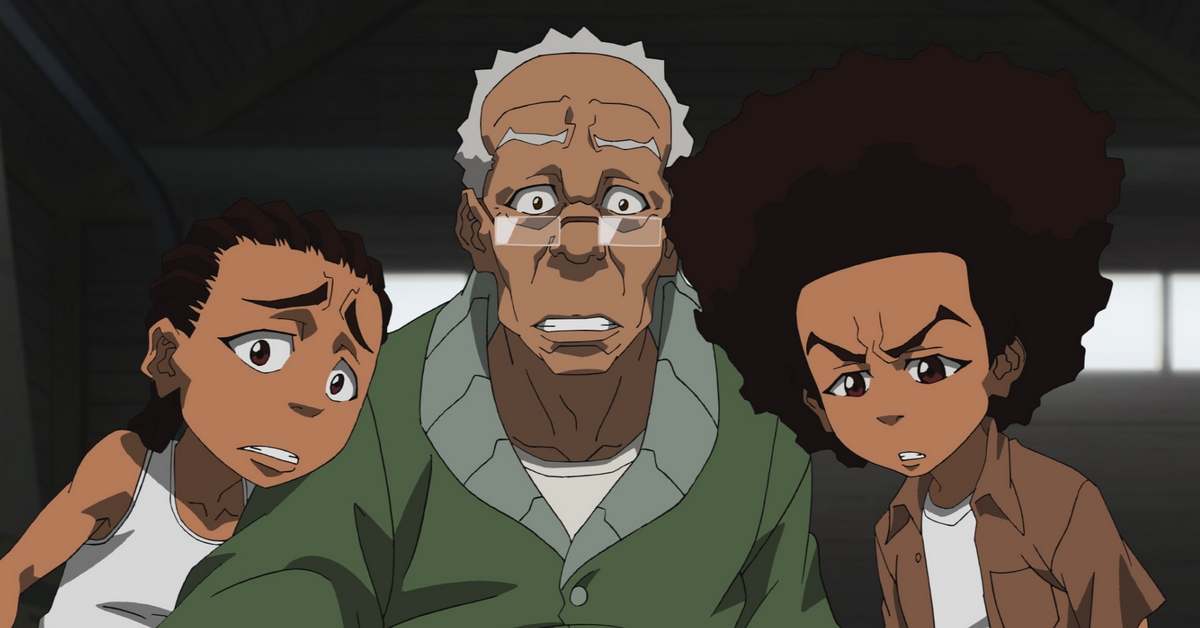 The series that gave commentary on American politics from a Black perspective is finally coming back! The Boondocks will return for a fifth (and sixth) season in 2022 as a reboot of the series, followed by a 50-minute special on the HBO Max streaming service. The iconic series, which aired its last episode on June 23, 2014, will have a multitude of things to address, given that it has lain dormant for more than seven years.

Before we dive into all the things The Boondocks will have to address, it’s worth noting that the original series managed to raise more than just eyebrows. Its satire, political incorrectness, and aggressive poking at race relations that mirrored the anti-political-correctness stance of its creator raised blood pressures and poked all the right nerves. However, given how HBO Max is currently riding the censorship wave, The Boondocks might not be as edgy and angry as we once remembered. Time will only tell as the Aaron McGruder–penned show settles into its new home with HBO Max.

Here are the things The Boondocks will have to address when they return to the small screens:

The Death of George Floyd

The death at the hands of police of George Floyd, the 46-year-old American-born Black man from Minneapolis, was pivotal to American history. It sparked outrage and caused protests against police brutality, police racism, and lack of police accountability not just in the United States but also worldwide. For African Americans, especially, it reignited the argument that’s still going on in America regarding the relationship of Black people and structures of governmental power.

When it comes to The Boondocks, it’s quite easy to imagine Grandpa Freeman marching on the front lines, Riley plotting retaliation and giving voice to the frustration and pain the entire nation felt at that moment, and Huey asking himself whether the protests would be enough.

Many consider Trump’s presidency as a comedic act in and of itself, given how a business magnate without political experience became a president while simultaneously being the worst person for the job. But, just like the polar opposite of Mr. Smith Goes to Washington — all altruism is replaced by extreme megalomania.

Stinkmeaner, the secondary antagonist of The Boondocks, could easily be a Trump supporter constituent, and Huey and Riley having the chance to somehow meet Donald Trump would be pure comedic gold.

The insurrection on the Capitol Building was the single most powerful display of impotent rage of one man, caused by a rapidly deflated ego over the loss of a political function. We have QAnoners, who view Trump as their hero, potential domestic terror threats, and common rabble-rousers who have decided to literally storm the Capitol Building to “hold politicians accountable.” As usual, reason goes out the window when the mob goes wild, and the rabble wanted a sentence without a fair trial “al la frontier” style.

Having Tom DuBois recount the March as both a Black man and a representative of the legal establishment could put things into an interesting perspective.

BLM is a civil rights movement that became nationally recognized following the street demonstrations in 2014 in protest of the deaths of two African Americans. However, the movement is considerably different from its forebears of the ’60s and ’70s and has drawn criticism, mainly due to their tactics, academic freedom views, views on law enforcement, and money allocation. This would, of course, make Huey question and express distrust towards the organization, while Grandpa could be entirely trusting of their appeal.

John Witherspoon, the legendary actor and an icon of the comedy world, died of a heart attack at 77 years old. His death was felt by those who grew up watching The Wayans Bros., The Tracy Morgan Show, the Friday film franchise, and those who loved The Boondocks series. The new series, though already announced, still hasn’t revealed the replacement voice actor for Grandpa, and it’s hard to even imagine a Boondocks series without his iconic voice or the voice of Regina King (Huey and Riley).

It would be remiss for The Boondocks to return and not acknowledge the passing of John Witherspoon in some way by pointing out some of his work.

This one is pretty self-explanatory, considering that the original series came out before anyone thought it possible that a virus, and the fear and paranoia it induced, could be in the public consciousness. So, there’s no way that The Boondocks, the series that relies heavily on satire and controversial statements, could come back without at least touching upon the unreal environment that was “Don’t breathe,” “Don’t touch things and your face,” and “Whatever you do, don’t see your elderly parents.” Now try and explain that to a 10-year-old smart kid such as Huey and his mischievous 8-year-old brother who live with their granddad.

Greta Thunberg is one of the greatest eco-warriors of our generation. She has impacted the world far more than the average person could, or would ever hope, and all of that before the age of 18. However, Greta’s efforts in environmental change and sustainability would understandably be a foreign concept for Grandad, who grew up in an era when the environment was thought to be a never-ending and ever-replenishing resource.

This could be juxtaposed against the fact that, in some impoverished communities, day-to-day things like survival, substance abuse, violence, and police brutality sit higher on the priority list than environmental sustainability concerns.

And the list goes on. There’s certainly no shortage of things that The Boondocks could and quite possibly should touch upon when the series comes to HBO Max in 2022. The most exciting part about its return is that it also marks Aaron McGruder’s return as showrunner. May the image of Ghostface Killah bless the reunion of The Boondocks and their rightful creator when the show finally airs in 2022!