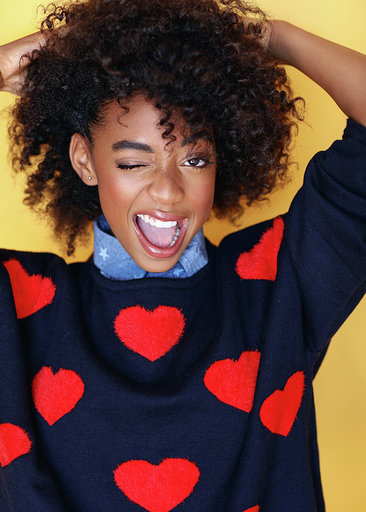 If you haven’t seen NBC’s number 1 show, This Is Us, you may be living under a rock.

Fans know that the show is all about portraying real life on screen. For 14-year-old actress Eris Baker, who plays the role of Tess Pearson, her character has had the opportunity in Season 3 and 4 of adding a new dynamic to this real-life drama.

Not only does Baker take her role seriously as Randall and Beth Pearson’s second daughter, but she also realizes at a young age the weight her role carries to millions of households.

Baker first stole the hearts of viewers when the show premiered back in 2016. Tess Pearson’s role served as a youthful and lighthearted point of view to the drama-filled show four years ago, but as Tess (as well as Eris) is getting older, she is experiencing life for herself, which includes the uphill battle of figuring out who you are as a young teenager.

In Season 3 of This Is Us , fans of the show got to get a closer inside look at your character Tess Pearson and her internal battle of coming out to her family. How did you prepare for taking on such a serious topic at 14-years-old?

I have been preparing in different ways. I am not really familiar with lots of coming-out stories or what someone is thinking when they are coming out at such a young age. So I did do my research and read some articles on how coming out worked for others, because I know that Tess was nervous, confused, and scared. I really wanted to make a little backstory for her. Like, why is she scared? Why is she confused? Why did she feel this way? Like x, y, and z. That really helped me figure out the background story of that scene. There’s also an amazing woman who told me that I should go out, grab a notebook, and act as if I were Tess and list why I would be scared and why I’m nervous to come out to my parents. That helped a lot. I just love writing so I like to express my emotions through Tess.

Do you feel a responsibility to viewers, specifically younger viewers, who may be watching and relating to Tess’s struggle of coming out? Can you speak on that responsibility you feel?

I feel responsibility for every role I play to prepare and ask and act it to the fullest. And I know that specifically this role it was difficult at first because I was putting a lot of pressure on myself, because I felt the responsibility that I wanted other people to see this and be like, “That was me when I was younger,” or “Oh my God, I had a friend that went through this,” or just like “Oh my God, I’m so inspired by Tess.” I really want people to feel the feels during that scene. So it was for sure responsibility, I would say.

Tess finds solace in talking with her uncle Kevin (played by Justin Hartley) about being herself at school. What would you tell fans who may be having trouble with finding a safe space or trustworthy person to talk to about their sexuality?

I would say if you’re having a hard time talking about your sexuality, obviously Tess went to her uncle, but if you have siblings that you are close with, maybe that would help. I talk to my siblings about everything. They’re young, but they still have a way to help me be secure when I’m with them. It’s always a safe place when I’m talking to them. So if you have siblings and sometimes if you just read, if you just write it out in your journal, that’s an amazing way to express yourself. I do that all the time. I express myself through my writing if I don’t have someone to talk to. Yeah, and there’s lots of friends. I know that it’s going to be hard, of course. But if you have that one best friend who you can tell anything to, then I would go to that person and talk about it. So I think that’s for sure three different ways that you can express yourself.

You’re such a mature and elegant actress, many fans may forget that you’re 14 years old. Your social media is a good balance of work and play. What do you like to do on set or in your free time as a young teenager?

I like writing. I’m reading a lot more. I recently just bought the book Milk and Honey and I’ve just been reading that and I can’t wait to start the second book. I love to just hang out with family. I recently went to Mammoth with my family, and we went skiing. That was just an amazing, fun way to get away. And I play tennis. I stopped because of the show, but I would love to get back to tennis because that was great. I don’t play many sports anymore, but tennis was a lot of fun.

This Is Us has a star-studded cast. Have you received any good advice from your castmates on how to tackle Tess’s struggle?

I think Mr. Sterling [who plays Randall Pearson, Tess’s father] definitely. He’s always given me great advice. When Tess is coming out, that was the first time I ever cried on camera. Going into that scene I was super nervous. I never cried [on screen] before. I went up to him and I was just like, “You know, you cry all the time. Like crying is just on your agenda now.” Every episode, I feel like he’s crying. So I went up to him and I was like, “Hey, what do you do? What do you think about when you cry, like how do you get yourself to cry?” He was like, “ust think about anything that you’re emotional towards that you kind of have an emotional connection with. What makes you sad? Maybe play a song that makes you sad. Just do little things that you know that will sometimes get your eyes to water.”

It could be something really happy. It doesn’t always have to be sad. That really helped me. I feel like of course, it is something sad but it’s super hard. For him to give me that advice and tell me that, you know, if you do something sad and happy, if there’s a book you like that makes you want to cry, think of that. Even a picture can make you cry. So just think of those things while you’re in the scene. That was great advice because obviously he has cried in scenes and it helped. So yeah, that’s advice that he gave me.

Are there any difficulties you’ve come across representing a young teenage girl struggling with her sexuality? What or who has helped you in overcoming those difficulties on screen?

So, Tess recently cut her hair. When I found out that they even wanted me to cut my hair, in general, I cried immediately, because my hair was just everything to me as a young Black girl. Like, my hair was my hair, and it’s something that’s so close to me. I feel like it’s almost like a super cape. So, when they asked me to cut it, I was just like, “I would never do that.” Like, what? No, I wouldn’t do that. But then I had to stop being selfish for a second and really think like, “One, Eris, it’s just hair and you’re only 14, your hair will grow back.” And then of course, it’s my hair but it will be represented in something way bigger. I know that other people who are going through what Tess is going through or have cut their hair before, I want them to watch this and be like it’s okay to take risks and it’s okay to do hard things because at the end of the day those things make us who we are and they make us different and they make us awesome. That was one difficult thing that definitely happened this season.

The season finale of This Is Us airs March 24. Do you have any hopes for where you would like the writers of the show to take your character next season, without obviously spilling information you can’t spill?

Lastly, what do you hope fans take away from your portrayal of Tess on the show?

Viewers can watch Eris Baker and the rest of the cast of This Is Us on Tuesdays at 8 pm, on NBC.