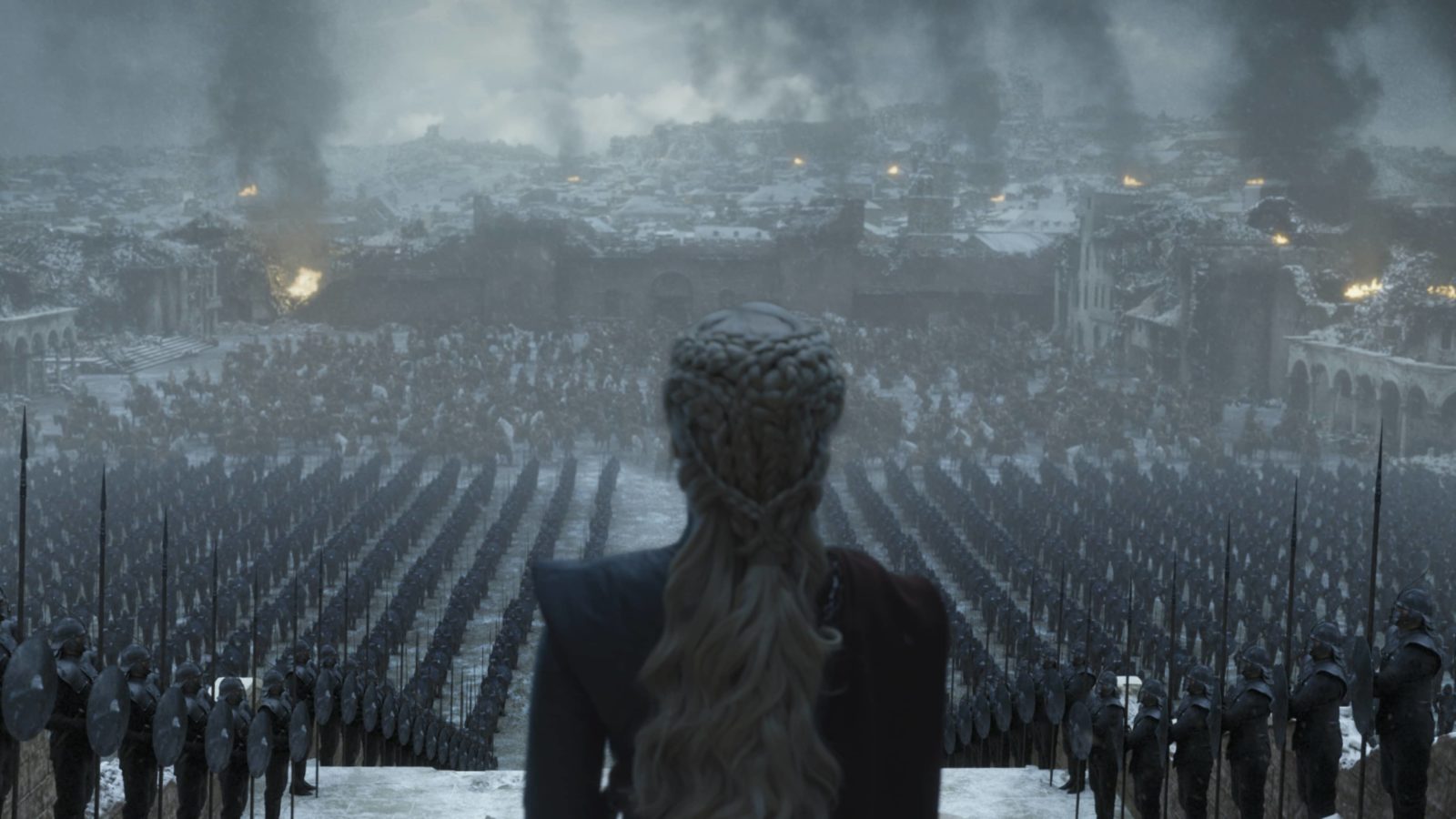 The time has come, over eight seasons the epic fantasy series based on the George R.R. Martin books of the same name, Game of Thrones, has come to an end.

As someone who has been an avid fan and live-tweeter of the series for many years now, this was a sad moment for me. I’ve enjoyed conversing and sharing memes, GIFs, and sarcastic tweets with other fans and now this chapter of the series has finished.

The series over the course of this season has come with some controversy and has had the most divided response from fans yet. The change.org petition going around requesting that season 8 be re-written has already garnered over 1 million signatures. And although it’s unlikely that there will be a re-write, it remains that not every fan will ever pleased about how a series ends and the more popular the series, the more controversial the ending.

Lost or Sopranos anyone?

Let’s take our last dive into the series finale episode of Game of Thrones. Spoilers ahead.

The war is over and Tyrion looks among the rubble and there is barely any life left. There are some leftover Lannister soldiers who managed to survive the chaos and have been captured by the Unsullied. Greyworm plans to grant his Queen’s wishes and kill the surviving soldiers. However, both Jon and Davos is against it, stating that they have already won and the men should be spared.

As Jon begins to apprehend Greyworm, the Unsullied form into a battle stance ready to take out Jon.  He has to step back since the Queen holds rank.

Tyrion walks into the Red Keep and sees Jaime’s golden hand and now knows his brother’s fate. He cries over his brother’s corpse and we also now have confirmation that Cersei is dead. However, it is highly doubtful Tyrion was weeping over her corpse.

Dany greets her soldiers and tells them that they have kept their promise and killed the Lannister army as well as given her the Seven Kingdoms. She is proud of her accomplishments and feels a sense of victory.

Tyrion slowly approaches the Queen and basically tells Dany to take this job and shove it, he quits his role as the hand of the Queen. Dany then sends him away to be taken as prisoner and inevitably to be killed for treason.

Arya says she knows a killer when she sees one and tells Jon that he will always be a threat to the Dany and warns him about her ways, at this moment Jon is still loyal to his betrothed and wants to see the good in Dany. 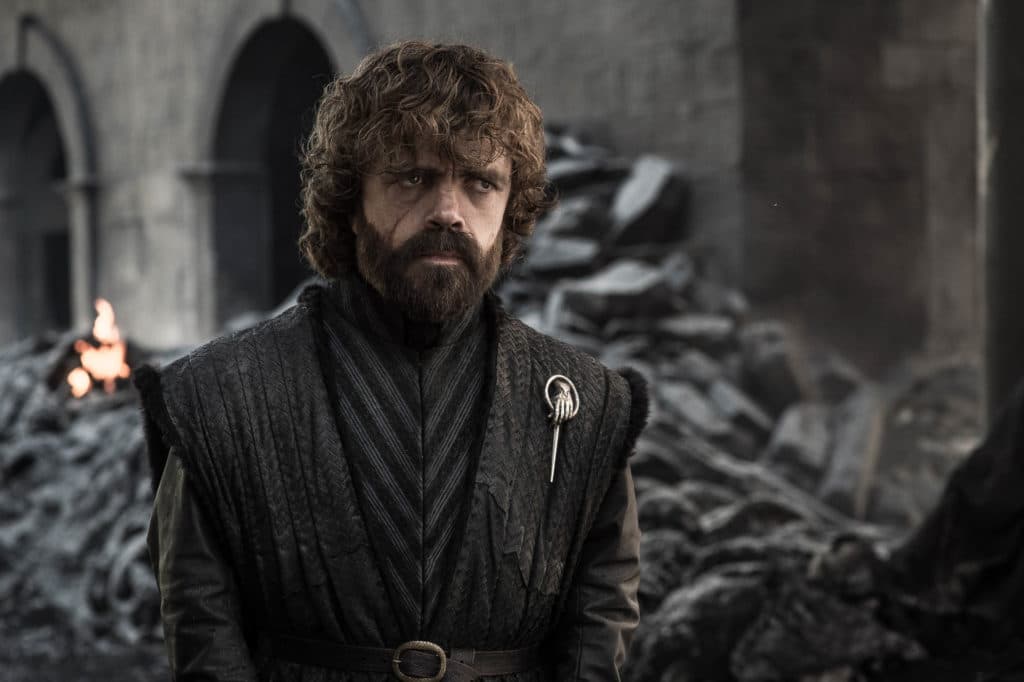 While Tyrion is kept as a prisoner, he admits his guilt about turning in Varys. He asks Jon if there is life after death since Jon Snow himself has experienced death before. Tyrion asks if he would have burned the city down like Dany, and Jon refuses to answer. However, Tyrion already knows the answer to his own question. “Everywhere she goes, evil men die and we cheer for it,” says Tyrion. Tyrion tries to convince Jon that he should get rid of Dany, but Jon isn’t having it.

Jon meets with Dany tries to convince her to forgive Tyrion and let him go, but she refuses. Dany assures Jon, that they will have a life of peace and happiness in spite of all of these events. Jon reaches in and kisses Dany, during their embrace, Jon takes his blade and stabs her. Dany is slain and her reign is now over.

Drogon sees the aftermath of what happened as Dany’s lifeless body is on the floor. Drogon sees Jon and sees Dany. In a moment where we expect that this will be the end of Jon Snow (yet again) instead of breathing fire on Jon, Drogon destroys the iron throne and it becomes a melted mess. Drogon wants all of this to end.

Yara Greyjoy, the queen of the iron islands makes a return. Yara is still loyal to the queen and Arya is not here for her “loyalty”. Robin Arryn has grown significantly and was barely recognizable as he sits among the last remaining members of the council of Westeros.

Tyrion approaches the council and suggests Bran should be the king. And in an odd turn of events the most unlikely character capable of ruling a kingdom, becomes the King of the Seven Kingdoms.

Bronn finally gets his castle and becomes the Lord of Highgarden.

Jon is sent back to Castle Black to be a part of the Night’s Watch. So now Jon Snow is back to where he started going from being a bastard and outlier to a King to now being a has-been.

Brienne writes a historical account of Jaime’s final days and apparently Samwell Tarly comes up with the title “A Song of Ice and Fire” and is the George RR Martin of this final chapter.

When Jon returns to Castle Black, Tormund sees him shocked that he’s returned. The only positive moment to reflect here is that there is a possibility that Tormund could pursue that relationship with Brienne. Maybe.

Sansa becomes the Queen of the North in Winterfell.

And we discover the theme song to Game of Thrones has lyrics.

Game of Thrones has now come to an end and it is a lot to process. What did you think of the ending?  Were you expecting more? Or did it end exactly the way you would have hoped it would? Fire off in the comments below and stay tuned to our next recap of the #ThronesYall podcast.

And now, we bid you farewell.