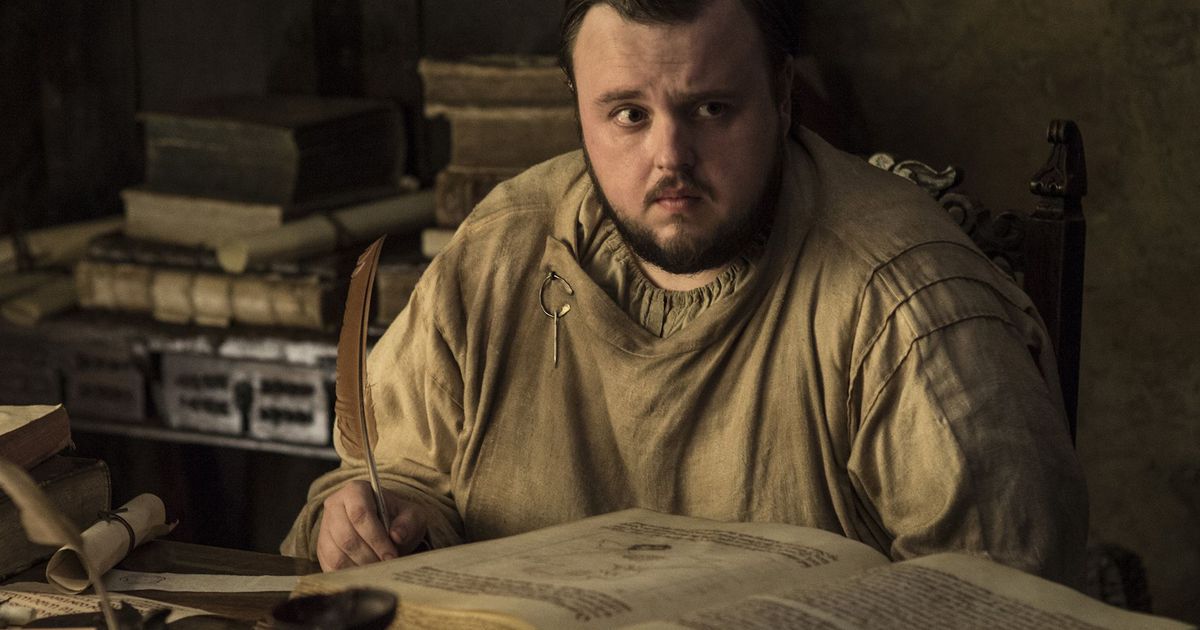 I realize that the internet can be a fickle place for nerds. Our love of books and interest in the details of our fandoms can be exhausting to some. I understand that. We all do. It doesn’t mean that we have nothing to offer the rest of the group.

And all that is to say: there is no reason for the mainstream Game of Thrones fans to be STILL sleep on Samwell Tarly.

Sure, he did get a little buzz after the first episode of the season, but his role was eclipsed once again in episode two by much more dramatic things. For example, folks were shocked that Reek — I mean Theon — chickened out on his sister when Uncle Euron showed up. No, Theon is not the poster child for PTSD. Give me Sansa or the whole damn Unsullied Army for that. They can rep the cause with pride. Reek knows what he did, way before Ramsey came into the picture. He knows why BGN ain’t giving him the time of day!

The list of second episode drama goes on. Yes, we know they are playing the game. Meanwhile, Samwell is the only one trying to save Westeros, and if a fan theory is correct, he may be more important to the story than you all thought. I say “you all” because ya’ll still sleep on Samwell Tarly.

His scene this week opens up with Sam and the maester visiting Jorah and then walking through the library in the Citadel. Who else would love to get into that library and just set up camp for a week? I know I’m not the only one. Sam is like any grad student following his advisor as they wax poetic about this subject or that. Meanwhile, Sam got an independent project that’s overdue (entitled “Fighting Wights without Might: Deconstructing the Winter King’s Army”) and he needs the advisor to answer one damn question. Of course, answering that question takes two hours, 15 books, and a lecture on a topic that wasn’t even tangential to the original question. Ever persistent Sam finally gets the man to the point. Only to be shut down with a resounding “NOPE!”

But, as the maester continues on, a fan theory that had been basting in the forums and waiting for a proof, winks its head at us. The maester says he is writing a book about the wars that came after the death of Robert Baratheon. Sam, still stinging from the shutdown he just got for his project, serves up his own burn to the maester, trashing the man’s dry ass title for the book. Sam tells him that the title needs to be more poetic.

More poetic like THE SONG OF ICE AND FIRE!!!!

Okay, calm down. We have just this little exchange as proof. However, this is one reason why the world should start paying more attention to Samwell freakin’ Tarly! He wrote the damn book! Well, may have wrote the book. Will write? Time will tell.

Another thing is: last week, nerds like you all spotted Littlefinger’s dagger in the pages of the books Sam had been reading. That dagger is important. Now Sam knows how.

That’s not all. Sam returns to Jorah’s room where he commences to using Maester Pylos’s recipe for treating greyscale. Jorah was just sitting there, ready to end it with his sword. So, when Sam comes in with rum and a cart of potions, Jorah goes, “what the hell else do I have to do right now?” and lets Sam commence to flaying the hell out of the greyscale in order to apply a medicine Pylos created. This is what Sam asked his advisor, I mean the maester, about earlier. Jorah is important in the fight to come. Sam knows they can’t afford to lose the man without at least trying.

If Sam finds a cure for greyscale, think of how many more people they can recruit to help fight the Wights once Jon/Dany take out Cersei’s crazy ass.

One more thing I want to point out about our man Sam. Like the rest of us nerds, he is researching and gaining knowledge. We see this in the confidence he is getting. The old Sam would not have defied the orders of his elders. He also would be too chicken to touch Jorah, much less spend a whole night skinning the man. We nerds get our confidence up when we have become well-versed in our niche. When we know our shit and nobody can tell us otherwise. So, in the coming weeks, I think we will see more from Sam as he absorbs more knowledge from the Citadel despite the roadblocks being put up by the other maesters. He’s becoming stronger and braver for the fight to come.

I think the fan theory is true. I can see Sam outliving all those geezers, living years later to write the book on it all.