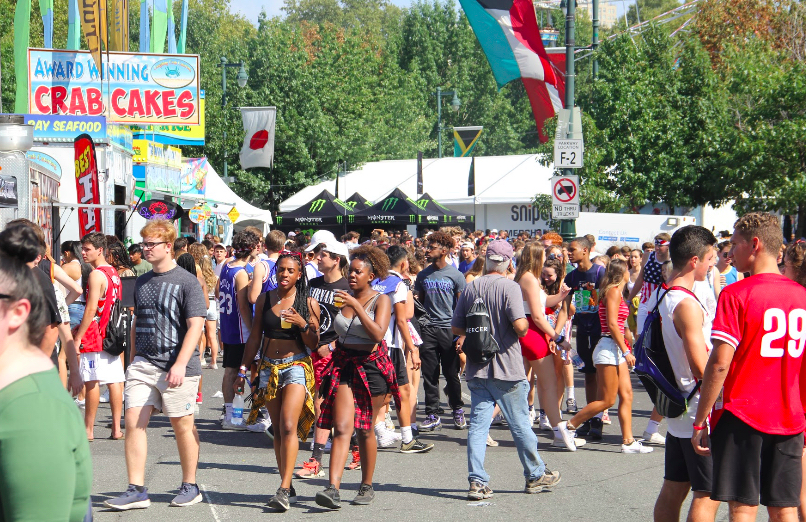 Jay-Z’s Made in America festival returned to the City of Brotherly Love this past Labor Day Weekend and ended summer with a loud, colorful bang (looking at you, Cardi B).

Despite doubts about the festival returning to the Benjamin Franklin Parkway, Jay Z was adamant that the popular music festival remain at its original venue. What Hov wants, Hov gets. This year’s festival was filled with nothing but sunny skies, good music, and some new additions to the festival. Gone were the boardwalk rides; this year in the center of the Parkway was a towering Ferris wheel, strategically placed for the perfect selfie. Another welcome addition to the festival was Cause Village, a section of the parkway dedicated to activists encouraging festival attendees to register to vote, volunteering for local organizations, and getting involved with social reform. We can’t leave out the food, either; festival-goers enjoyed mouthwatering meals, from slices of pizza, golden boardwalk fries, burgers, to my favorite option, jerk chicken cheesesteaks.

The vibe at this year’s festival was everything music lovers enjoy at the festival’s four stages: the Tidal Stage, the Freedom Stage, the Liberty Stage, and the Rocky Stage at the steps of the famed Philadelphia Art Museum. Here are the top seven artists we saw at Made in America this year.

Jorja Smith has had quite a year since the release of her debut album Lost and Found. The beautiful 22-year-old British singer sashayed onto the Liberty Stage on Saturday in a pink dress covered in yellow flowers. Her long, sleek, ponytail trailed behind her, and she serenaded the audience with her soulful voice. The opening notes of her social reform anthem “Blue Lights” rang out into the Parkway; the audience swayed as Jorja crooned, under her spell. She soon turned up the tempo with a performance of her duet with Drake, “Get it Together.” Champagne Papi might not have been there but Jorja still worked the crowd, moving her hips along to the beat. Jorja Smith was quite literally a breath of fresh air.

“Hot Girl Summer” has officially made its way into our lexicon, and Megan Thee Stallion has made her way into our hearts. The Houston-based rapstress drew one of the biggest crowds of the festival. People swarmed to the smaller Tidal stage in hopes catching Megan’s performance. It was a sight to behold; with her clad in a custom Gucci outfit by designer Dapper Dan and matching flaming red hair, Megan commanded your attention. The crowd chanted her name as she launched into hits like “Big Ole Freak” and “Fire in the Booth Freestyle.” Megan brought out them strong knees and twerked to the delight of the crowd. She kicked it up a notch by having a twerk competition on stage. A few lucky fans were selected to join the female MC on stage. They jumped over the barriers and twerked their hearts out to impress Megan Thee Stallion. One particular fan got Megan’s seal of approval with a resounding, “Okay, frennnnn.”

It seems like 2019 belonged to Lizzo. The soulful, curvaceous singer lit up the Liberty Stage donning a denim one piece, her long curls tied up in playful pigtails. Lizzo wasted no time launching into “Cuz I Love You,” off her third studio album of the same name. Her strong vocals reverberated through the festival grounds; she was definitely the highlight of Sunday afternoon. Lizzo with her body positive message spoke to her adoring crowd, letting us know that we can all feel “Good as Hell.” Hands down the best part of the set was Lizzo’s performance of her smash sleeper hit, “Truth Hurts.” There was not one person in the crowd who didn’t recite her lyrics word for word. She finished her rousing set by bringing out her famed flute, Sasha, and played along as the audience sang the chorus to her single, “Juice.” Speaking of Sasha, if you looked close enough, you could see Beyoncé herself bopping along to Lizzo’s set. Lizzo is Queen Bey approved.

Cardi B, our modern-day Binderella, closed out the first day of the festival in true Cardi fashion. The Bronx native owned the Rocky Stage wearing a rainbow-colored jumpsuit and matching boots. A few minutes into her set, the boots came off, allowing the rapstress to really work the stage. Fellow rapper Paris Fontaine joined Cardi on stage and they performed her hit “Backin’ It Up” to an ecstatic crowd. Before long Cardi claimed her asthma was acting up but that didn’t stop her from climbing the scaffolding on stage to perform her anthem “Press.” She wanted the entire world to hear her, and she definitely got their attention. After getting down from her perch, Cardi led a karaoke session of her many features including, “Girls Like Me,” “Finesse,” and “Motorsport.” By far the best part of her set was her performance of her chart-toppers, “I Like It” and the song that put her on the map, “Bodak Yellow.”

Houston-based rapper Travis Scott closed out the festival to the biggest crowd of the night. Scott is arguably one of the biggest influencers in today’s hip-hop game, and the Grammy-nominated rapper brought an unreal musical experience to the festival. Known for his visuals as much as his music, Scott dressed in a tie-dye shirt and black jeans, brought the psychedelic feel of his AstroWorld tour to Philadelphia. The pulsating beats of hits such as “Sicko Mode,” “Antidote,” and “Love Galore” hypnotized the crowd along with flashing lights, lasers, and of course, fireworks. Travis Scott quite literally ended the night with a bang.

A new fresh face to the Made in America was Harlem-based rapper Melii. The beautiful Latin newcomer was met with cheers from her adoring fans known as the Melii Mobb as she took the Tidal Stage. Melii stunned in red leather pants and a cobra-snake bustier, her red curls up in two messy pigtails. She quickly worked the crowd with her Latin infused hits such as “Sh*t Talk” and “Icey,” which got a co-sign by Rihanna. Melii first came onto the scene with her bilingual remix of “Bodak Yellow,” and there’s no doubt she’s here to stay.

Check our exclusive interview with Melii below.

I read that you built up your stage presence by volunteering at nursing homes and performing. When did you know you wanted to be a rapper/entertainer?

When did I know? I always knew but because I was so young, I never knew how to go to a studio and do certain things. But once I was in high school, I was in my first studio, which actually was in the projects in the closet with my friend Dennis. After that, I just knew that’s what I was passionate about.

What was it like being on the road with Meek Mill on his Motivation Tour? Was that your first big tour?

That was my first big tour. It was definitely a very good learning experience. It was a blessing — all blessings and all love. I’m thankful for the opportunity.

You are very proud of your Spanish roots. I love that you blend Spanish and English into your verses — it’s seamless. How important is it to you to continue to make music that highlights your culture and your roots?

I felt like it’s important to keep infusing the Spanish culture, and also that’s how I speak. There’s a certain thing that I like to do, just like swag out in Spanish. So, I always try to incorporate that into my music because my music is me.

Amongst all the musical performances, another artist shined. Haiiileen is a Miami-based multidimensional artist known for her neo-acid experimental style. Haiiileen was commissioned by Tidal to create a one-of-a-kind installation for Made in America titled WIIISH. We spoke with Haiiileen on creative process developing WIIISH and how music inspires her work.

How did you feel when you got the call from Tidal?

What was your inspiration for this piece? How did you come up with the concept?

For this particular piece, a lot of the foundation of my work has to do with synesthesia and a sense of aesthetic association. I’m trying to incorporate more architectural environments that are allowed to really challenge me on a personal level as a female fabricator artist. I took their concept of their brand of being black and white. Normally, my work is hyper color, but this at night is going to be a rainbow acid oasis. As you’re listening to this, definitely check out the photos. [You can see Haiiileen’s work on her Instagram @Haiiileen.]

You have a neurological condition to allows you to hear sounds and see color. How is that used in your work?

My whole life has always been an audio process. The neurological condition is called synesthesia. So synesthesia happens to about 5 to 10% of individuals. Mine, in particular, is called chromesthesia, which allows for audio to create visual colors or textures. So, pretty much, I see music, and I incorporate that into my artwork as well. Sound is such a huge component to how I exist as an individual. I’m so happy about being a part of Made in America because they’re incorporating now more visual artists into their platform. They brought me on board and obviously they’re moving forward. There’s going to be bigger and more interactive pieces. So for this one, in particular, most of my inspiration comes from the genre of visual audio called vapor wave. Vapor wave is an audio genre and a visual genre. It’s pretty much regurgitated internet into contemporary settings. I incorporate sounds from the internet and visuals from the internet. As you can see a lot of the aesthetics on this particular piece have a lot to do with some of the classical shapes that you will find in mostly the boom of the internet.

This year’s Made in America festival was a rousing success. Here’s to hoping next year is just as memorable. Look forward to a more in-depth breakdown of the festival on a special edition of the Black Girl Nerds Podcast.