Toy Story 3 was the perfect ending to a decades-long film journey.

The characters that many people practically grew up on — Woody (Tom Hanks), Buzz (Tim Allen), Mr. and Mrs. Potato Head (Don Rickles and Estell Harris), Jessie (Joan Cusack), Rex (Shawn Wallace) and more — had found a new home. Andy, the boy we all watched grow to be man, headed off for college and gave his toys to preschooler Bonnie. The toys were together and would be loved by another generation. A perfect ending, right?

Now, Toy Story 4, slated to open June 21, reopens that perfectly packaged trio and inserts a new installment. This was not a seamless process. In fact, it came with a lot of challenges that the whole team had to work through before the film could work. In a recent press conference at Pixar Studios, director Josh Cooley and producer Mark Nielsen described some of these challenges and how they overcame them to make the fourth addition to the Toy Story film franchise. 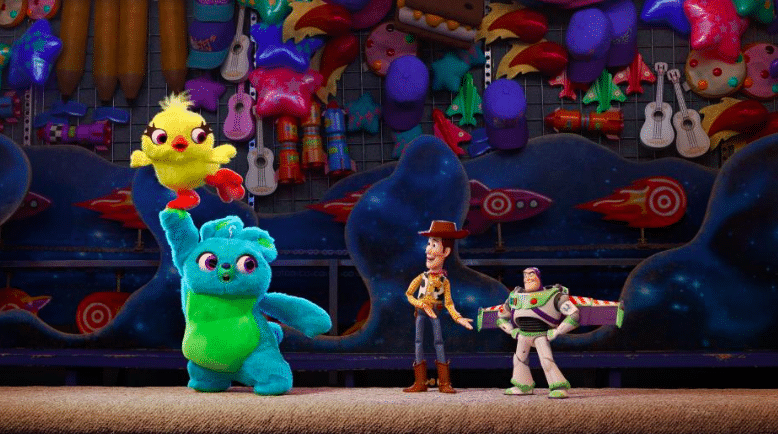 Coming Up with an Idea for the Fourth Film

Nielsen said the inspiration came from questions about the differences between Bonnie’s room and Andy’s. Once they started looking into the changes that each environment required, it was easy to continue searching until they had a new story. “In what way can [Woody] be having the same experience in Bonnie’s room that he had in Andy’s room?” Nielsen said. “All of a sudden, it just started to blossom. All these new ideas started to grow. How would he handle the situation? That’s always the best scenario: a character who we can show really well but in a situation, you’ve never seen. So, it just kept growing and growing.”

Cooley added that in the earlier Toy Story movies, the toys were supposed to be a set. The production team had to think of a new way to engage the characters without breaking any of the story that’s already been told.

“The idea of this also sprung out of the idea of a new beginning — a new chapter in the life of Woody,” Cooley said. “We knew there was a lot more that we could learn and ways that he can grow. There’s a new situation now within a new room. The toys are all blended from his old room in this new room. So, there’s a lot of potential in growth for Woody.” 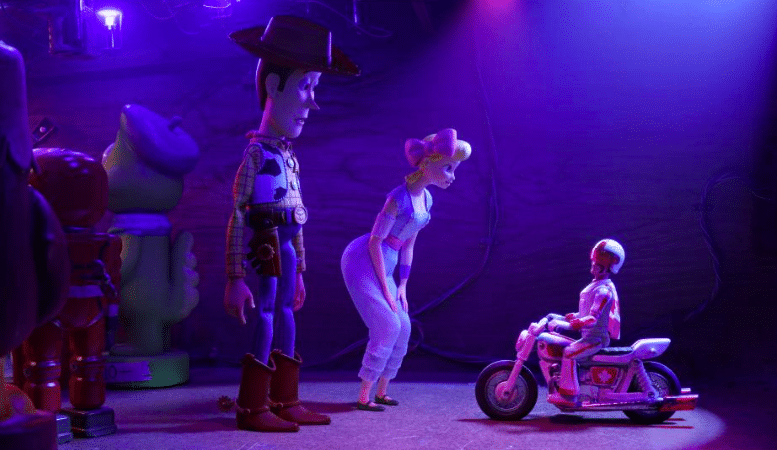 Where Did They Get the Idea for Forky?

The idea for the new character Forky came from one of the questions they asked.

Nielsen explained. “We were sitting around the story room joking about how kids will take the Christmas present and play with the box but wouldn’t play with the actual toy. We were just playing with, ‘Does this mean [in the Toy Story universe that] the box comes to life? How would that work?’ We went down this bizarre path. And then we said, ‘What if Bonnie actually made a toy? We’ve never seen that on Toy Story.’”

He continued, “Even though we hadn’t seen it done in Toy Story, [we wanted to] see where that goes. Because by [film] number four, there’s a lot of things that have happened. We don’t want to retrace down the same steps. So, it became this bizarre experiment. It just was too funny not to try it.”

Working without Don Rickles, the Voice of Mr. Potato Head

Nielsen and Cooley said that Don Rickles’s family contacted Pixar to ask about his role in the upcoming film. The company informed them that Rickles had signed on to do Toy Story 4. Tragically, though, he passed away before he could start working on the role.

According to Nielsen, Rickles’s family said, “Is there any possible way, [since] we’ve been doing this for 25 years, [that you can] create a performance out of that material?”

Nielsen said, “And so, we went back through all of the outtakes for all films, shorts, all the video games, all Ice Capades Shows, every possible thing. There is a lot of Don Rickles. I wouldn’t say it was easy, but there was a lot of work. I’m very, very, very honored.”

Cooley added, “It’s an honor to all of us. He’s such a big part of these movies. Every time you see a Potato Head toy, you hear his voice. The idea of doing this without him was one we didn’t want to have to consider. The editorial team did a great job.”

“A lot of mining through takes,” said Nielsen.

Getting Tom Hanks, the Pivotal Character Woody, to Sign on to a New Film

Neilsen told us, “One of the most terrifying moments was pitching the story to Tom [Hanks]. He knows the story and the character [Woody] better than anybody. And I just wanted to do right, by [the story and Woody]. [Hanks] came in. He’s like, ‘All right. What are we doing? What’s going on?’ I started pitching it, and we got to the classroom scene [which the press got to preview before the conference]. He said, ‘All right, you got me.’” Hanks was won over by the story pitch alone.

Toy Story 4 hits theaters June 21, but you can get your tickets today at Fandango.com. Fans can also catch Woody and the gang a day before Toy Story 4 officially opens with two special opportunities taking place in select theaters across the country. These include opening night fan events and Toy Story marathons. Check Fandango for more information and to find participating theaters.