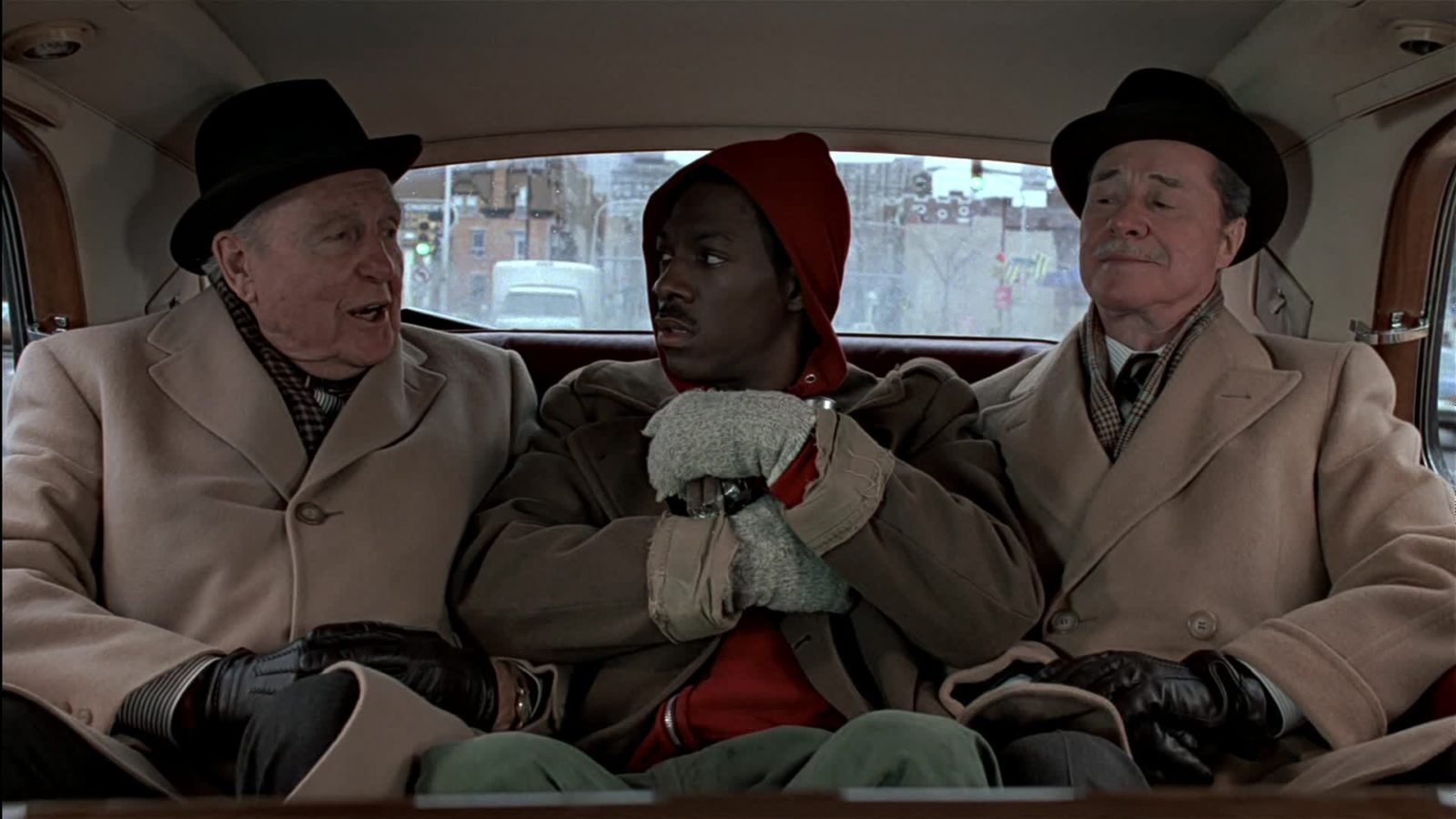 The so-called eternal question of nature versus nurture is the force that drives John Landis’ Christmas comedy Trading Places, which celebrates its 35th birthday this year. Business tycoons Randolph (Ralph Bellamy) and Mortimer (Don Ameche) Duke decide to play social scientists and perform an unsanctioned and non-consensual human experiment. They take homeless “career criminal” Billy Ray Valentine (Eddie Murphy) from the mean streets of Philadelphia. They give him a house, a butler named Coleman (Denholm Elliottt), and a high-paying job at their commodities brokerage firm. In the process, the Duke brothers annihilate the life of their employee Louis Winthorpe III (Dan Aykroyd)— just days before Christmas, the jerks — just to see how long it would take for him to descend into criminality once his golden parachute is gone. Spoiler alert: It takes about a minute and a half.

Even now, 35 years later, there are still few movies that tackle the subject of institutional racism in America, and this comedy vehicle does it with brains and heart. Because as we all know, all people are created equal, but they are historically not treated equal in American society, and in particular if they are not white, heterosexual, and able-bodied. As we see with the social conditions that lead to Billy Ray’s lot in life compared to Winthorpe’s silver spoon birth. “Luck has nothing to do with it,” Winthorpe preens after being asked about how he managed to land his fancy-pants girlfriend. And he’s right — it’s whiteness, not luck, that’s his blessing.

Juxtaposing iconic architecture and historic statues with this heavily loaded satire examining the intersection of race and class situates Trading Places firmly in its American context. This country’s history is the wallpaper of this film about racial and economic disparity as well as a core theme of white supremacy. Sadly, we haven’t seen much progress in these regards even all these years later. 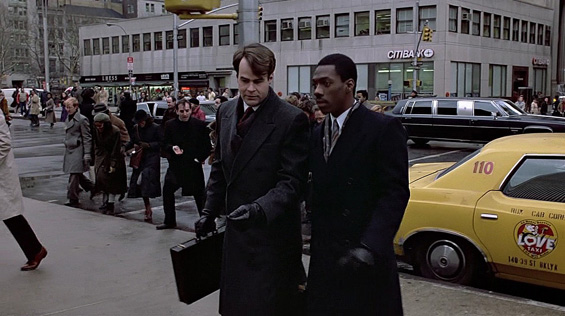 Its social justice messages aside, Trading Places is still a damn funny movie, in spite of some racist and homophobic language and events that would be considered unacceptable today (Dan Aykroyd in blackface… oy vey). Trading Places takes a serious social and cultural situation, and with fantastic writing and excellent acting turns it into a Canterbury Tales kind of romp, replete with mixed identities, just-missed paths, and lots of boobies. The gratuitous nudity would normally bother me, but within this context it works to set several stages.

Eddie Murphy’s performance in Trading Places is nuanced. His moments of vulnerability are powerful amid all the physical comedy as well as his wonderful laugh. It’s no wonder he received a Golden Globe nomination for his work here. Similarly, Aykroyd’s pretentious Winthorpe and his various privileged tics that persist long after he’s lost everything is somehow darkly humorous. Denholm Elliott as the butler brings depth and compassion to this supporting role, which earned him a BAFTA. Don Ameche brings an almost uncomfortable zeal to his role as the openly bigoted Mortimer. And Ralph Bellamy’s seemingly gentle Randolph packs a wallop when he ultimately reveals himself to be no better than his racist brother.

Legendary composer Elmer Bernstein’s now-iconic score also received award attention, earning this comedy a rare Oscar nomination. All I need to hear is a few notes anywhere in the movie and I know its Trading Places 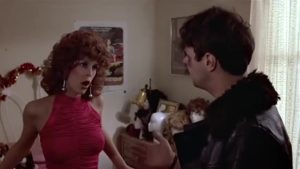 The true star of this movie will always be Jamie Lee Curtis, who also won her first award for her portrayal of Ophelia. We had never seen a woman like her on screen before. She was independent, strong, and sexual on her own terms. She is a sex worker out of economic interest, not trauma, abuse, addiction, trafficking, or desperation. The fact that she saved $42,000 in just four years is testament to her ambition and street smarts. Curtis’s Ophelia is one of the most sex positive portrayals of a prostitute in the history of cinema. And she also throws a no-nonsense humor into the mix that is even now refreshing and honest.

Ophelia and Winthorpe are both devout capitalists and, while in another context with lesser actors their relationship would feel contrived, here it is perfectly on brand. One of my few disappointments is that we never find out who the woman is with Billy Ray at the end of the film. Using a nameless Black woman as a sex object and prop never sits well with me. It’s such a stark contrast to all the agency given to white Ophelia.

And while I still have absolutely no idea what the Duke brothers actually do, or what Winthorpe and Billy Ray do to them on Wall Street in the climax of the film, Trading Places inspired real-life legislation. On March 30, 2010, Section 136 of the Wall Street Transparency and Accountability Act of the Dodd-Frank Wall Street Reform and Consumer Protection Act — now known as the “Eddie Murphy Rule” — went into effect. This law properly criminalizes insider trading, and the movie was cited by Commodity Futures Trading Commission chairman Gary Gensler in his testimony to Congress. 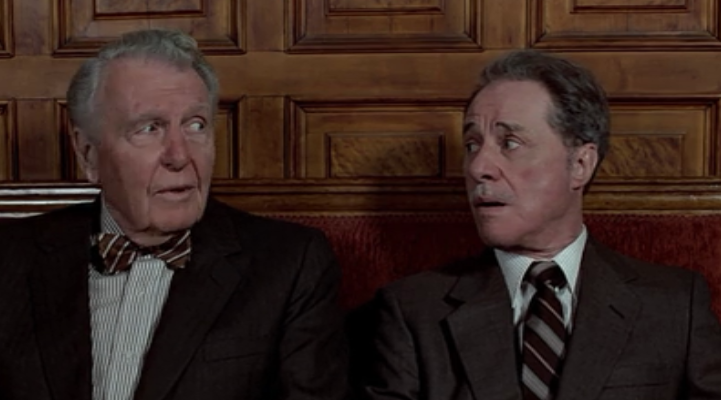 “It occurs to me that the best way to hurt rich people is to turn them into poor people,” Billy Ray Valentine says as he, Winthorpe, Ophelia, and Coleman plot revenge against the Dukes. It’s a commentary that remains valid today. Just look at how some politicians have chosen party over country, all because they don’t want to be at the same economic level as their constituents.

As he is bankrupted, Mortimer screams, “We founded this exchange! It belongs to us!” White male entitlement explained in eight words — we made the rules, so we don’t have to follow them. I wish there was more of this on-the-ground justice taking place in real life, but until then I will forever enjoy the looks on Randolph and Mortimer’s faces as they realize they have fully been played. With the help of a Black man, no less. Priceless.

As America continues to grapple with its history of racism, oppression, and white supremacy, Trading Places remains a kind of Cliff’s Notes of ongoing social issues wrapped up in a hilarious holiday comedy. What a gift.