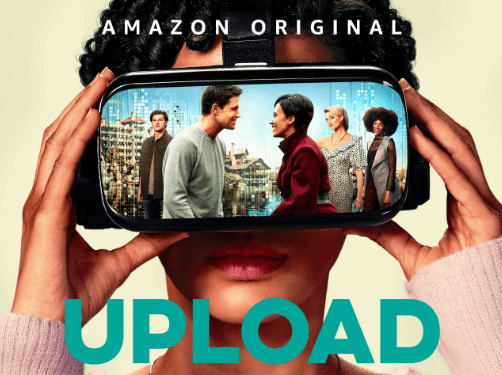 Upload (2020) is a fun-filled sci-fi comedy series that will leave its viewers charmed. There is something about this show’s liveliness, futuristic technology, and its comedic timing that just works. The story arc also touches on the idea of love transcending planes of existence between the main characters.

In the series, those who are on the verge of death are uploaded into a virtual world to live among the living. Taking a bold stance, Upload discusses social and class struggle that is prevalent in many societies by providing a landscape in which these can be explored.

The creator Greg Daniels has done it again in this imaginative series. He has produced a work that deals with the metaphysical and is witty, smart, and even has a bit of murder mystery. Daniels is known for his contribution to The Office, Parks and Recreation, and King of the Hill. His most recent works include Upload and Space Force, which both can now be streamed on Netflix. 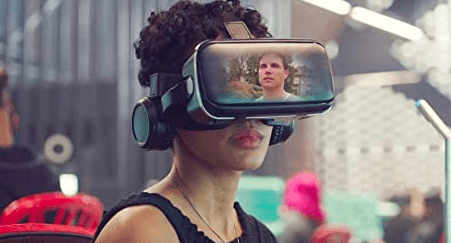 Upload has a good narrative that compels viewers forward. The one minor discordant note has to be the pacing of the mystery. While the main character slowly uncovers what really happened when he was alive, the last few episodes do feel rushed and a little underwhelming.

There are elements in this show that feel similar to other fantastic shows, with a pinch of The Good Place and their profound questions that revolve around life and death, a dash of Star Trek technology with their food replicators, and even a splash of Her, where the main character falls in love with a non-corporeal being. The general plot of the show is that a person’s consciousness is still able to live for as long as they can afford it in an afterlife even after their physical body is gone.

In the world of Upload, the year is 2033. We are introduced to the characters and the people who make up the physical and virtual world. The people are technologically advanced enough to transfer a person’s consciousness into an online world. Their memories and personalities are uploaded into a body where they are able to live for as long as they choose. The world they select to live in has a price — the more each person is willing to pay, the more luxuries they can have. For those unfortunate souls who do not have the funds available for a more heavenly afterlife, they do have the option to select a travel agent who can help them choose less accommodating destinations. 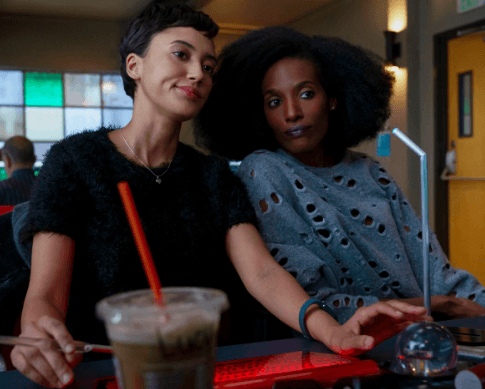 The physical world in is briefly summarized before the protagonist is killed and uploaded into the online opulent world of Lakeview. There is something about the principal characters that really makes this show work. Let us begin with Nathan Brown (Robbie Amell), the lead, who is smart, a little sleezy, but a kind soul. Nathan’s premature death at 27 has allowed the mystery to unfold. He and his business partner Jamie (Jordan Johnson-Hinds) were on the verge of a major project that would have taken down a conglomerate specializing in caring for individuals in the afterlife. There is more surrounding Nathan’s death than is first revealed. Nathan’s afterlife is conveniently taken care of by his lovely girlfriend, who gains fiscal responsibility over his afterlife.

Nora (Andy Allo) is the customer service representative for Lakeview assigned to Nathan’s afterlife. She slowly wins our hearts with her heartwarming struggles trying to keep her social and personal life together. Her connection to Nathan is intensified as she starts to develop a closer relationship.

Nora has a hilarious bestie that always has her back in the series, Aleesha (Zainab Johnson). Aleesha provides the right amount of attitude, class, and humor just when her best friend needs her the most. This leads up to Nathan’s girlfriend Ingrid (Allegra Edwards), who plays a very blonde, ditzy, rich, but truly kindhearted individual, who has secrets that slowly start to unravel as the seasons reaches its conclusion. This love triangle between the principal characters begins to fracture as Nathan gains a better understanding of the man he was when he was alive and starts to understand the kind of person he could have been all along.

This leads up to Nathan’s girlfriend Ingrid (Allegra Edwards), who plays a very blonde, ditzy, rich, but truly kindhearted individual, who has secrets that slowly start to unravel as the seasons reaches its conclusion. This love triangle between the principal characters begins to fracture as Nathan gains a better understanding of the man he was when he was alive and starts to understand the kind of person he could have been all along.

The concepts this series tackles are not by any means original; the demonization of capitalism, the wealth gap, and social inequalities existing even in the virtual afterlife are not new. All these have been discussed to no end on many shows. However, what this series does do well is allow for these ideas to be applied to the afterlife. The show is able to morph and go in new directions. While there is a lot to like about the series, there are also areas that just don’t add up, yet. For instance, the afterlife is based on how much data a person can afford. Yet, when given the option select which afterlife each person can live in, why would anyone freely select to live at the bottom of a world with no freedoms if they have the option to live a better life in another world?

The ten-episode season maps together a plot that is creative, innovative, and touching. Each episode gets viewers close to the truth. With each memory and new experience in the afterlife uncovered, the mystery gets ever more complicated as the characters involved in the murder mystery make themselves known. This series entices and entertains with minor plot holes. The show has the potential to be more than what it currently is, and perhaps it will do more to clarify the afterlife they created.

Upload is now available to stream on Amazon.