The Walking Dead has somehow simultaneously become both water cooler talk and cult classic. It’s in a strange middle ground, as it has a powerful group of dedicated fans that are neither small nor quiet.  The Walking Dead is a genre show, but is also incredibly mainstream, with episodes having as many as 17 million viewers.

What has made this show into the juggernaut that it is?  Who cares about a bunch of zombies?  And how does a romance fit into that?

The trick of The Walking Dead is that it isn’t about zombies.  This show is a gigantic character study, focusing on the human condition.  The pilot began with Rick Grimes in a story about a man out of time. Rick wakes up to a living nightmare — the world has died and he then goes on a quest to find his family, and keep them safe.

The Walking Dead is about evolution and is one of the most intense dramas on TV to date. We just don’t see the transition of Rick Grimes, we also get to see the people around him change and adapt in this brave, new world. This has given its audience a plethora of characters to care about, identify with, and root for as they journey along in a post-apocalyptic world. 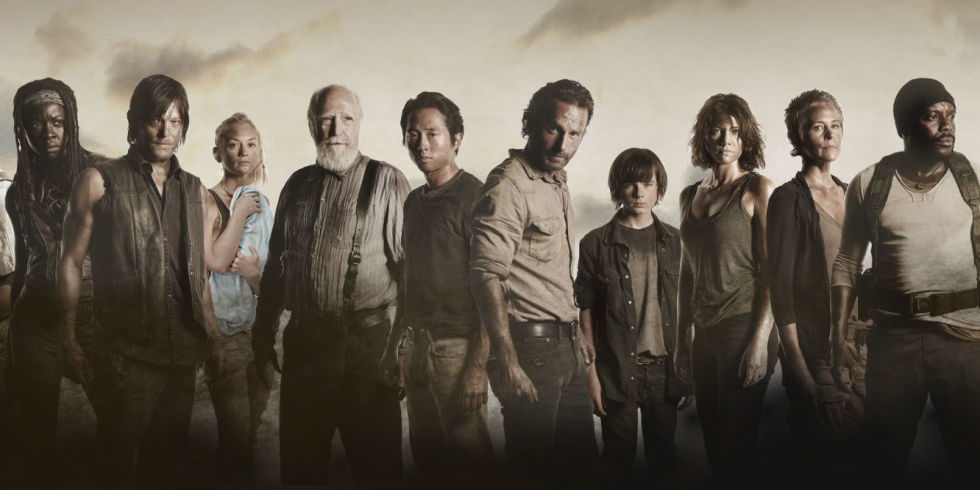 This level of devotion has also brought a new cache of characters for fans to cosplay.  One may ask what is the purpose of cosplaying someone from The Walking Dead? Outside of walkers, the characters are fairly plain clothed: jeans, plaid shirts, vests, button downs.  And yet, the level of dedication fans put into becoming these characters is simply outstanding, including (but not limited to) finding the exact brands of apparel to perfect their outfits.

One may ask why people would take the time to do that? The characters on this show don’t have superpowers or badass outfits. And yet, the characters are heroes all the same.  Well, most of them.

A huge point of cosplay is to become your favorite character. The one you look up to, identify with, wish you could be for a day.  The connection the audience has with these characters runs just as deeply as anything presented by Marvel or DC.

The Walking Dead is full of “everyday heroes,” and the cosplayers who participate in this fandom are part of a vast and great community — a community that instantly recognizes each other, and takes photos with our fellow cosplayers in order to share in the joy of bringing beloved characters to life.

I am one of those people. 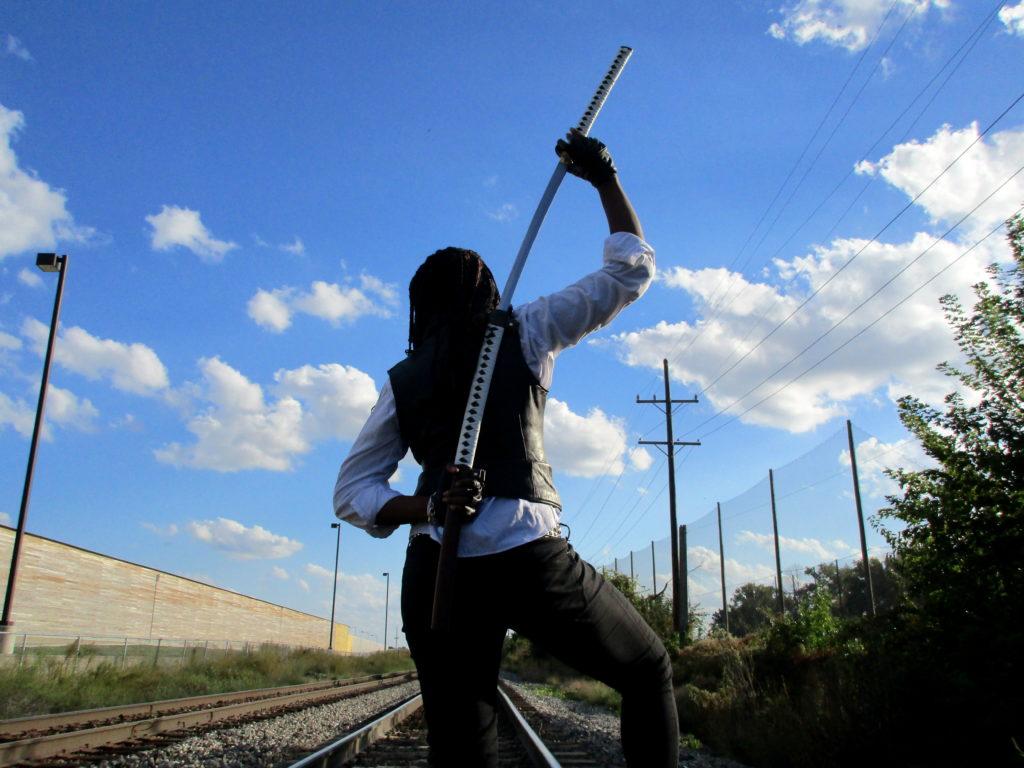 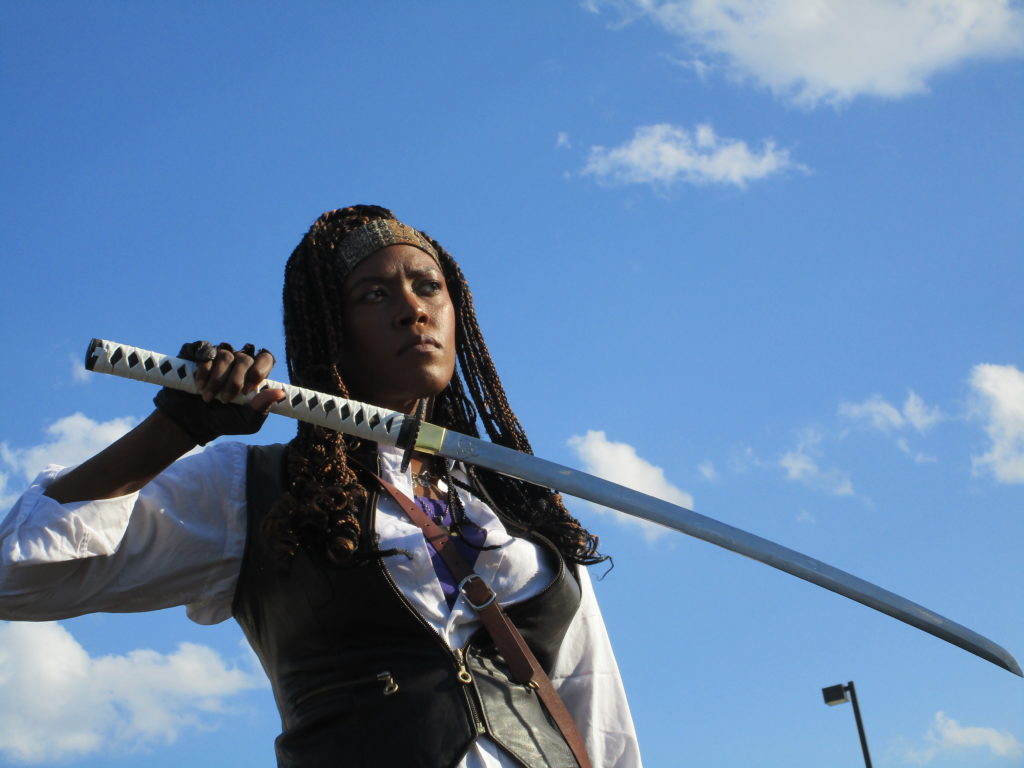 I first began cosplaying as Michonne at 2016 San Diego Comic Con.  The reception was more than positive, with both fans and fellow cosplayers asking for photos with me. 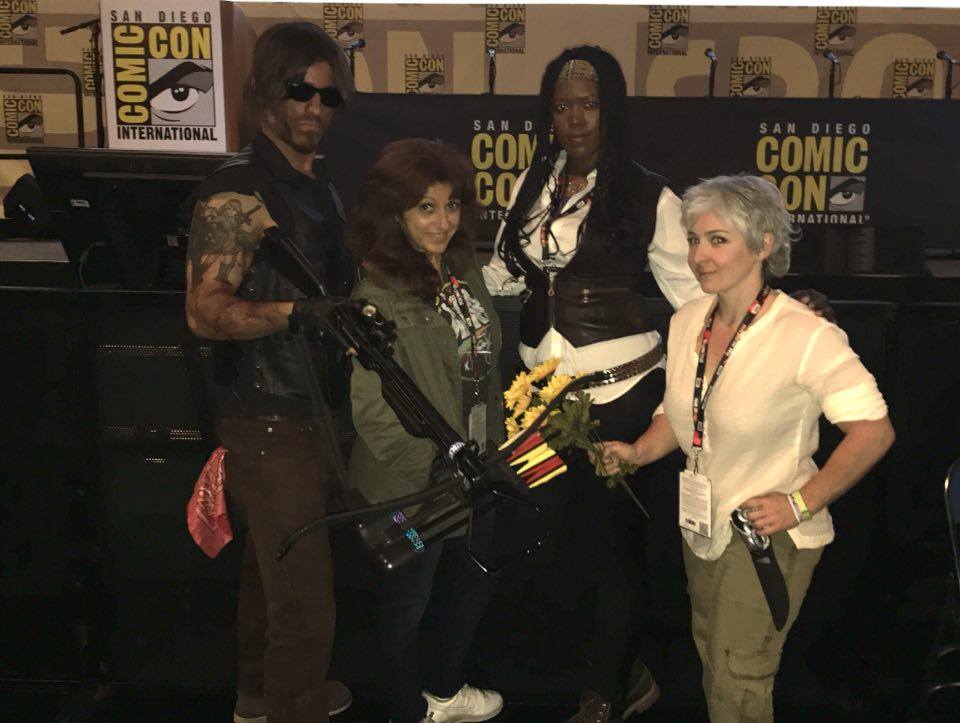 In addition to my outfit, it didn’t hurt that I had a passing resemblance to the character.  It was because of this that I decided to take my cosplay to the Season 7 premiere at the Hollywood Forever Cemetery.

In spite of diligently entering every day, I did not win a pair of tickets to this fan-driven event.  Since the cemetery was literally two blocks from where I was, I decided to put on my Michonne gear and hope for the best. Miracle of miracles, I found possibly the one man who had come alone and also had a spare ticket.  After a bit of name re-arranging from event organizers, I was in.

Along the way to my seat, I met a Season 1 Rick Grimes cosplayer, complete with the Sheriff’s uniform, hat and badge. We smiled as we passed each other, and yet, we didn’t pause or talk.  While it’s true, I was in a hurry, I instantly lamented not introducing myself, or at least getting a photo with him.  I didn’t have to fret too long, as another fellow cosplayer  — an Andrea — brought us together for photos.

She felt that both Brandenn and myself were authentic in our cosplay, and as a huge fan of the show, she wanted a photo with the two leads, Rick and Michonne. Where I have a passing resemblance, Brandenn is a dead ringer to Rick Grimes. 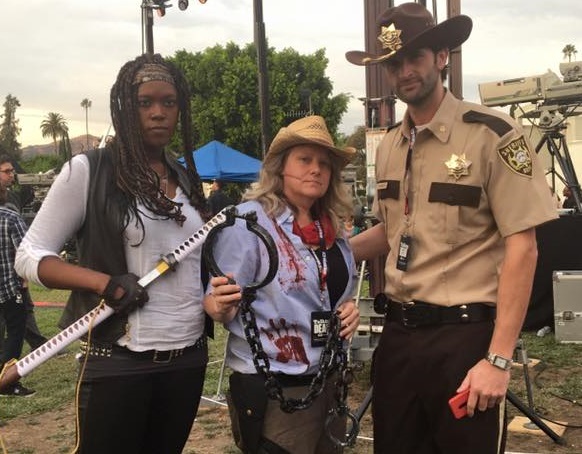 There was a steady stream of fans waiting to either take photos with us or photos of us, including other cosplayers. And yet, somehow during this brief, five-minute interaction of literally standing and posing, I knew I wanted to know more about this particular cosplayer.

“After the show, I will find you,” he ascertained, holding my hand.  I gave him a smile and a nod, somehow knowing that he would.  Ever since that fateful day on October 23rd, the night that Abraham and Glenn died…

The RL Richonne was born. 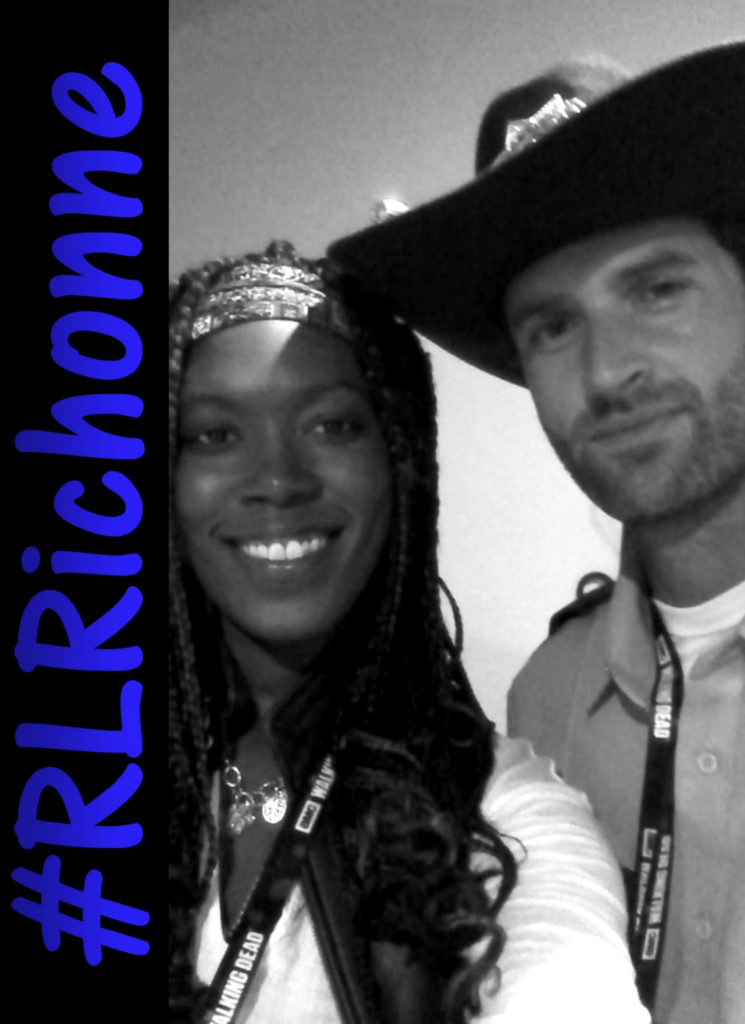 A further twist on this was, his mother was there as well, dressed as Carl. She simply insisted that her son and I go and get drinks, thus solidifying the cosplaying counterparts we were to become.  In addition to that, she suggested we try out for Talking Dead’s Ultimate Fan. It was strange how it had not occurred to either myself or Brandenn to do this, but in reality, it made perfect sense:

We exemplify the power of The Walking Dead community in bringing people together. As fans and as cosplayers, as two people who found each other through a mutual love of this show and its characters, we would do justice in representing the fandom. It really doesn’t get more ultimate than the RL Richonne — Jill and Brandenn.

However, we can’t do that without your help: we need your votes from now through the end of the season. The Talking Dead site allows you to vote as often and as much as you like.  All it takes is a refresh of the voting page.

Please help myself and Brandenn become Talking Dead’s Ultimate Fan by voting for us here (or http://www.amc.com/shows/talking-dead/exclusives/ultimate-fan-search).

Writer. Journalist. Creator. Jill Robi is a writer first, and a fangirl second.  A Chicago native with a BA in fiction writing, she is an author, a journalist, movie aficionado, a self-proclaimed geek, avid comic-con attendee, panelist, and cosplayer. A freelancer, she continues to grow her own creation, HouseOfFangirl.com, as a press and film critic.