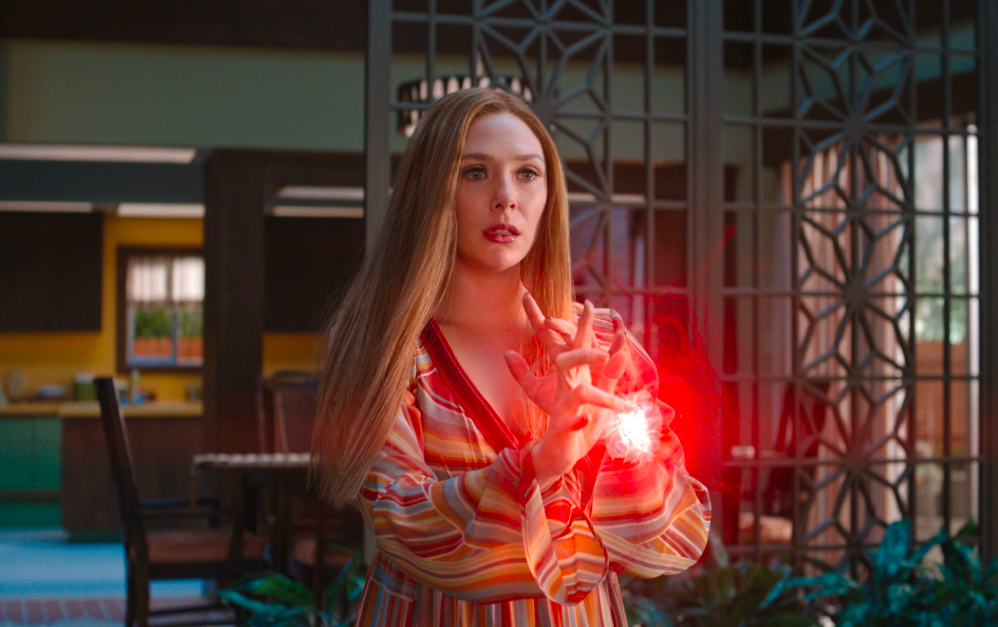 **The Following Contains Spoilers for WandaVision**

Agatha Harkness’s words to Wanda Maximoff weren’t just a sneering taunt. They were a statement of fact.

In Episode 8 of Disney+’s WandaVision, for the first time, viewers were given glimpses of Wanda’s backstory through a series of flashbacks. We saw the sources of Wanda’s immense pain, tragedy after tragedy, compounded upon each other: the murder of her parents; the mental torture of being trapped with a ticking bomb for two days; the murder of her twin brother; and the death of her soulmate by her own hands only to watch him be resurrected and killed in front of her.

There have been several moments over the many storylines in the Marvel Cinematic Universe that have moved this writer to tears. I shed more as I watched Wanda experience her first in a series of traumatic events as a little girl. I did not expect the feelings of recognition and understanding of her grief to run so deeply. But as a survivor of childhood sexual abuse endured over the course of many years, I felt a commonality in the shared exposure to trauma at a young age.

I also observed the characteristics of a mental health issue in Wanda’s depiction, though it was never explicitly named in the show. As I watched Wanda’s anguish and rage transform Westview into a pristine haven, her own oasis, I recognized the hallmarks of dissociative disorders.

“Essentially, dissociative episodes are used to stop the recall, or block, memories of a traumatic event that is too painfully unbearable,” said Crystal Frazier, PsyD, MPA with the University of Texas Health Science Center at Tyler.

Wanda has experienced “so much trauma” over the course of her young life. I believe she, like many other survivors, developed not just a coping mechanism, but a survival technique. Dissociating was my survival method when as a child I was preyed upon by multiple sexual predators. I understood the compulsions that motivated Wanda. In order to persevere through the traumatic events — to retain some semblance of living more than pain and helplessness — we compress the trauma, compartmentalize it, and disconnect from the real world.

For many trauma survivors who dissociate, facing the reality of the pain is more than we can physically and mentally withstand. When we experienced the traumatic event(s), we found ourselves not in control. To compensate, those with dissociative disorders can create lofty and elaborate alternate realities in our minds where we are in control. That appears to be at the heart of why Wanda created her utopia with Vision in Westview.

“You would rather fall apart than face your truth,” Agatha observes.

In Wanda’s case, the fabric of her world is woven from a desire to escape the feeling of “endless nothingness.” After entering the laboratory at SWORD, standing next to the remains of Vision’s lifeless body, she puts her hand over the place on his head where the Mind Stone had been embedded. Tearfully she cries, “I can’t feel you.”

The void of nothingness had to be filled with something that helped Wanda feel alive again. She had gone numb, but what sprung from her involuntarily was rage and wave after wave of grief.

In the moment when all her emotions could no longer be suppressed, Westview was transformed.

“When a traumatic event is happening, the brain wants to escape it,” said Bobbie Burks, PhD, LPC-S. “Several options are available to some people, but not all. We don’t know why some are able to dissociate and others are not. I feel it is a God-given gift that helps some to survive after the trauma.”

The problems arise, however, when the survivor is no longer able to only dissociate during traumatic episodes and it carries over into everyday life. Personally, I can recall driving my car and not remembering the last miles of the journey. This isn’t like basic distractions or a busy brain from stressful thoughts that occupy the space when we should be in the moment. Even tasks that are mundane or uncomfortable become an opportunity to mentally check out. You are no longer connected to the reality of the present. While walking through the aisles of the grocery store or mopping the kitchen floor, there is a deep fantasizing about other scenarios.

In his book, The Body Keeps the Score: Brain, Mind and Body in the Healing of Trauma, Bessel van der Kolk examines “the extreme disconnection from the body that so many people with histories of trauma and neglect experience.” He adds, “It takes tremendous energy to keep functioning while carrying the memory of terror, and the shame of utter weakness and vulnerability.”

According to 10FAQ.com, “Dissociation happens when people do not experience the world around them as it exists and have no control over the matter. It’s an involuntary escape from reality.”

People who experience frequent derealization (10FAQ Health) “know that something is wrong with what they’re seeing. Sometimes, they may view things as if through a fog. Time itself can seem to speed up, slow down or stop completely. Any noticeable change in the way you sense what is happening around you could be an instance of derealization.”

Depersonalization (10FAQ Health) is a psychological disorder “in which the patient feels as though everything around them is not real. Another sensation they can experience is that they are outside of their own body and observing themselves. It can feel as though the patient is dreaming, even when they are awake.”

Derealization and depersonalization seem to be the driving factors behind Wanda’s sitcom life.

“Depersonalization/derealization may emerge from a number of sources,” Burks stressed. “Usually, unpleasant circumstances that an individual wants to escape.”

With dissociative amnesia (Spiegel, MD), the information lost “would normally be part of conscious awareness and would be described as autobiographic memory. Although the forgotten information may be inaccessible to consciousness, it sometimes continues to influence behavior (e.g., a woman who was raped in an elevator refuses to ride in elevators even though she cannot recall the rape).”

Dissociative Identity Disorder (DID) (10FAQ Health) was formerly known as Multiple Personality Disorder or Split Personality. The condition basically means that the patient will have more than one personality. Each personality will have different characteristics, such as age, ethnicity, and even gender. In some cases, the alternative personalities, which are known as alters, can even be animals. Alters will tend to “take over”, which is known as switching, when the patient is exposed to certain triggers. The new alter can then remain in control ranging from a few seconds to days at a time.

“This is the tip of the iceberg,” Burks said. “Suffice it to say that it is a strategy that some individuals are able to access without conscious control that can help them get through trauma and its aftermath. I have never worked with a DID client that did not have a deep trauma history.”

After the riots at the Capitol in January, U.S. Rep. Alexandria Ocasio-Cortez spoke publicly about the triggering event and her subsequent emotions as a sexual assault survivor.

“When we go through trauma, trauma compounds on each other,” she said.

The science of psychology supports her statement and dissociative disorders as coping mechanisms for those traumas. “[Dissociative patients] have trouble managing day-to-day stressors that you and I may not find difficult,” Frazier said. “Daily stressors can be so difficult, they trigger a dissociative episode. Learning to cope with stress and distress is hugely important for managing and preventing dissociative events and can enhance one’s ability to live a healthy and productive life.”

Wanda Maximoff’s story is a reflection of the mental side effects of multiple traumas that millions are living with daily.

Marvel has a knack for subtly spinning mental-health storylines into the character development. The upcoming series The Falcon and the Winter Soldier will reportedly examine the mental struggles of Bucky Barnes. For fans of the MCU and survivors, we can see shades of ourselves in the fictional lives of these extraordinary characters. It provides hope for those who live it — and understanding from those who support us.

Here are some references below for a deeper dive:

Editor’s Note: It has been brought to our attention that the use of the term “characters” in describing some of the symptoms of DID is considered offensive to those who suffer with the disorder. It was not the writer’s intention to cause any harm with this statement. She utilized source materials provided to her by a doctor and licensed professional counselor that utilized this terminology. We relied on the experts to explain the symptoms and their provided source materials. We wish to be understanding and empathetic to those who are living with DID and the term has been removed.