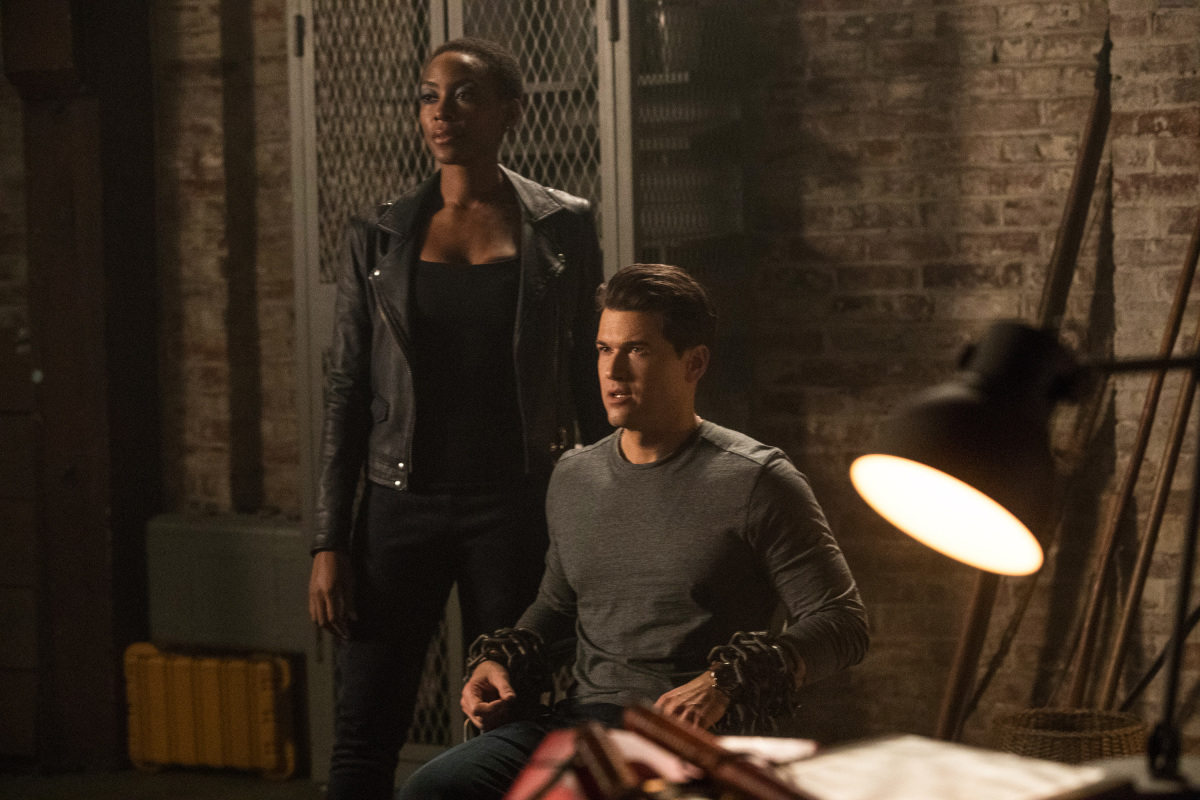 Amaya’s and Nate’s romance is thrown into the fire this week on Legends of Tomorrow, as they split up to save Mari and subsequently show Kuasa the value of family. All of this while Ray and Sara fight Ana clones in another time and Zari tries to preserve her Ramadan fast by not strangling Rory. The entire episode is about the Legends coming together as a family to fight their battles.

Let’s dive into the episode.

Sara is jarred by her experience with the death totem and is ready to leave a minute to deal. She puts Amaya in charge and commences her journey to…wherever she was going to go. Fortunately, Ned stumbles in, halting Sara’s exit. Ava is missing. She hasn’t been to work in days.

Sara, Ray, and Ned go off to 2018, to find clues, first at Ava’s office and next at her parent’s home. Sara is staying for that mission, as she still loves Ava and can’t leaving knowing the woman may be in danger. At Ava’s parents’ home, Sara finds the first clue that something is awry. The people claiming to be Ava’s mom and dad admit (under threat of Sara’s violence) that they are actors hired to perform whenever Ava came home. Been doing it for years. The Legends and Ned go back to Sara’s office where they find a clue. Somebody is hiding something in the year 2213, and it may be the key to finding Ava.

Yet, when they exit her office, Sara, Ned, Ray run right into Ava, back from a visit with her parents (which she later admits was actually a visit with her ex as a cure for her breakup). They still move forward, averting Ava’s attention long enough to steal her time travel watch. In 2133, they find out what the block was for. That time is filled with Ava clones doing service work for the human population.

Turns out, Ava is from a super-secret spy project that created the perfect warrior woman and cloned her for service all over. The clones are created as adults, in the form the real Ava is in now. This explains why she can only remember back a few years, why her personnel file is blocked, and her parents are performers. She is just a clone. Before anyone could get answers, they are surrounded by Ava clones and joined by the real Ava. Together, the Legends fight their way out of the melee and get the real Ava home. However, there are still a LOT of questions.

Meanwhile, Nate and Wally find out that Mari, Amaya’s granddaughter, was injured trying to save a family in a fire. Mari is still trying to be Vixen, despite not having the totem passed to her from her grandmother. The drive to save people seems to be in her blood. Amaya sends Nate and Wally to watch over Mari as she recovers and to also convince the woman to give up the dangerous job without the totem. When they get there, the men find Kuasa lurking in the hospital.

After a watery tussle with Wally, Kuasa and Nate have a talk. It seems that they have the same goals despite their dislike of one another. Nate for the danger Kuasa has placed Amaya in and Kuasa for the damage Nate could potentially do to their bloodline if Amaya’s love for him prevents her from finding their grandfather. (I still say that man could be Nate. Color in black folk is so very fluid. Dark skin doesn’t mean that there ain’t White genes down the line.) Anyway, Nate and Kuasa reach a truce and set a trap for Damien and Nora Darkh.

Unfortunately, Nora has a stronger Mallus presence and sensed the double cross. Kuasa leaves Nate to be tortured, having exchanged him for Amaya’s totem. She takes that totem to Amaya while Nate awaits torture at the hands of Damien.

There is something troubling the villain, however, and he needs to get it out. The issues are so concerning that they make torture unappealing. The men have a talk about Mallus and the damage he’s doing to Nora. They fake the torture to keep Nora/Mallus away, giving us time to see a real human side of Damien Darkh. He regrets using his daughter and now just wants to spend time with her in his own twisted way. Nora soon comes back and sees their deceit. She knocks Damien out and commences to kill Nate.

Amaya and Kuasa show up and tag-team Nora/Mallus with the help of Nate and Wally. They all get way-laid by the powerful demon. The Legends want to go off and regroup to fight another day, but Kuasa wants to put an end to the monster. It doesn’t end well for her when the demon Nora reneges her water totem.

During their fighting, the Legends find that the demon has changed the totem. The stones all pulse red and give off a horrible power.

Before Amaya leaves, she puts Zari in charge of teaching Rory how to handle his newly acquired fire totem. Rory has other plans, using the totem to cook hot dogs, pop popcorn, and light farts on fire! The hot dogs are disturbing Zari, who is fasting for Ramadan. She is extra irritable too.

So, she finally corners Rory, but he is still eating. Zari tries to explain her religious holiday and the importance of it and the practice of fasting. Rory tries to get her to eat a bacon cheeseburger, totally missing her point. Zari has enough and taps into the full power of her totem. She is tossing Rory all over the training room and nearly injures him before she realizes something is wrong. That’s when they all discover that Nora/Mallus changed the totems. Zari’s aggression is due to that change. They really need to figure out what to do now before the totems lose control.

The family theme is very strong in this episode as each member fights some sort of family-related issue. The problems with Mallus are coming to a head and with Nora on the outs with her father, will he join the legends to defeat the demon. And, what about the clone Ava’s? Where the hell did they come from?

More answers next time, folks. I would love to hear your theories while we wait.