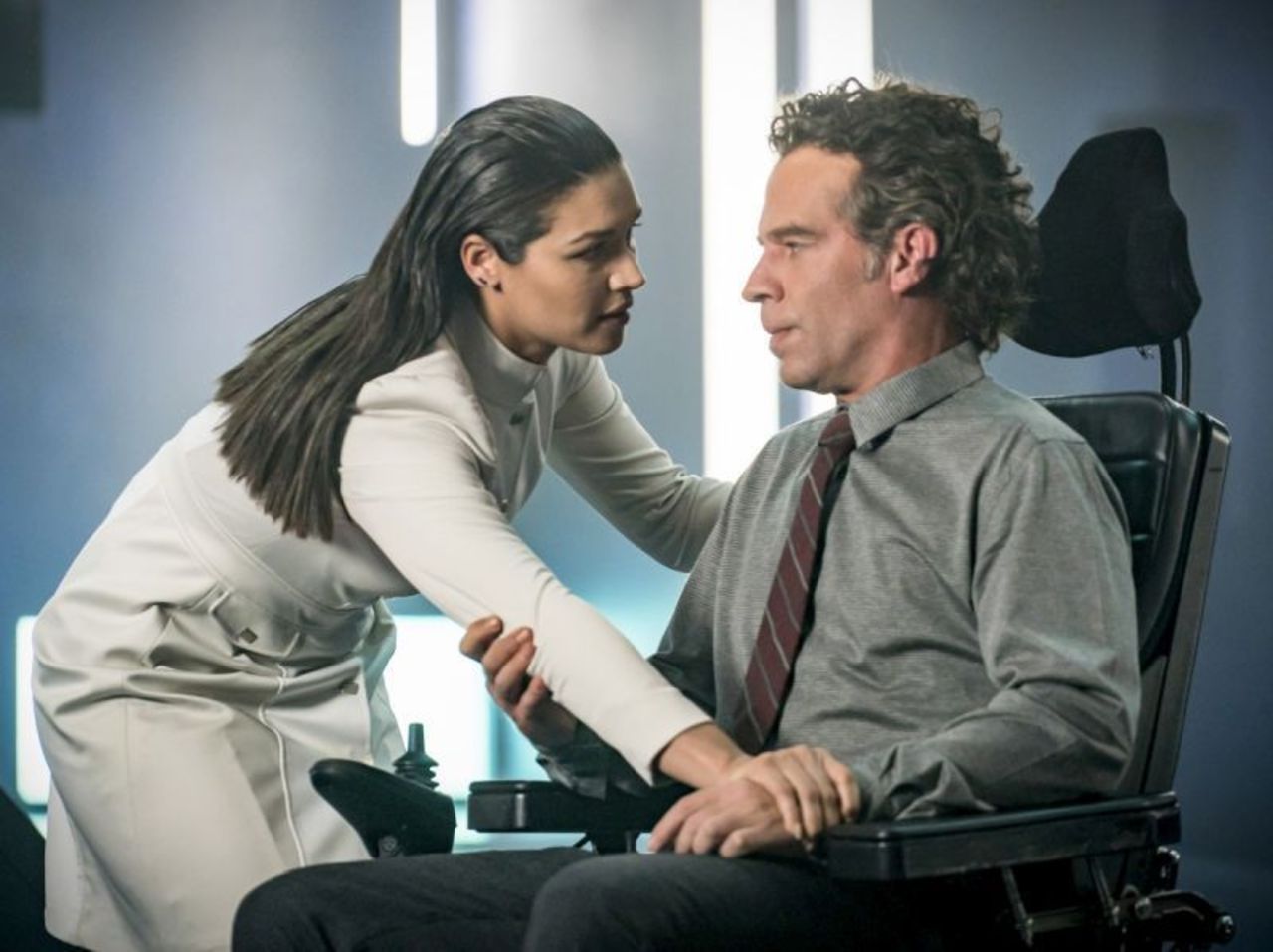 It’s not often that flashbacks are used to explore the origins of The Flash’s Big Baddies. From Reverse Flash to Zoom to Savitar; the previous lives of the show’s supervillains are typically scratched at, their motivations for wanting Barry Allen dead simple. It would seem that the writers of the fourth season of The Flash are taking a slightly different approach and are taking their time to reveal the motivations of The Thinker. In the seventh episode of the speedster series, “Therefore I Am” focuses on The Thinker’s past as Professor Clifford DeVoe. Though the flashbacks of DeVoe as a history professor fail to pinpoint his exact motivations as a supervillain, the episode suggests that his motivations for wanting to mess with Barry and Team Flash are complicated. Here are the episode highlights.

Episode 7 continued where the last episode left off, with Barry and Joe paying a visit to Clifford and Marlize DeVoe. The Council of Wells determined that Devoe was the likely culprit for all Central City’s recent ills, leading Joe and Barry to scope out the situation. However, instead of finding a sly criminal, Barry and Joe discover that their suspected supervillains are homebody professors who teach at the nearby college. Clifford and Marlize are polite and friendly, even joking about Marlize’s macaroni and cheese during Joe and Barry’s interrogation. Barry isn’t having it though — he insists that the couple is dangerous even though Team Flash think he is mistaken.

Clifford DeVoe certainly does come off as harmless in the flashback scenes that make up 75% of the episode. We see him teaching restless college students and confiding in Marlize about his “thinking cap” tech. We find out that DeVoe’s motivation when he was a professor was to reach people and enrich their lives with knowledge. Marlize aka The Mechanic is revealed to be the brilliant mind behind Clifford’s Thinker tech and engineered his “thinking cap.”

One of the big storylines explored during The Thinker’s flashbacks is the fact that both Clifford and Marlize were at Star Labs during the particle accelerator accident of Season 1. Their attendance at the Star Labs was solely to leach energy off of the particle accelerator to power their thinking cap device. When the accelerator exploded, the dark matter interacted with the thinking cap, giving Clifford the ability of super intellect. His abilities are astounding, yet he soon finds himself with an advanced case of ALS or Lou Gehrig’s disease and is at a complete loss. With his body rebelling against him, it is Marlize that creates the machine that we see him hovering in as The Thinker. This hovering device is meant to hinder the effects of ALS as well as power the thinking cap.

While it was interesting to finally find out who The Thinker was, the episode has yet to explore his motivations for becoming a supervillain. As it stands, the flashbacks provide insight into The Thinker’s life but failed to show any evil qualities. In fact, the flashbacks humanize him and highlight the love between him and Marlize. Yet, The Thinker’s distaste for Barry and Team Flash is real, with scenes of he and Marlize purposefully framing the scarlet speedster for harassment. Whatever the reason for The Thinker’s hatred of Barry Allen, it seems safe to say that he could be the biggest challenge Team Flash has had to face to date.

No one believes Barry when he says Clifford DeVoe is dangerous.

All the mac and cheese in the world doesn’t fool Barry Allen when it comes to Clifford DeVoe and Marlize. While Joe, Cisco, Iris, Harrison Wells, and Caitlin can’t find a shred of evidence to support the couple’s connection to The Thinker, Barry Allen is sold on their villainy instantly. His obsession with the case eventually gets him in trouble at CCPD and Iris questions whether Barry is just feeling stress about their upcoming nuptials. But Barry persists, and after he finds a hidden camera in Star Labs (it was the one hidden in Samuroid’s head), he makes the decision to break into DeVoe’s house. Instead of finding anything that supports his suspicions, Barry is served a restraining order from Marlize and is instructed to take leave from CCPD. In one last ditch attempt to determine Clifford’s motives, Barry shows up at the university Clifford works at and has a discussion with the professor. It’s not long before Clifford admits his identity as The Thinker, explaining to Barry that everything that has happened, from Barry’s escape from the speed force to the dark matter meta-making cloud on the bus; The Thinker is responsible.

One thing The Thinker doesn’t reveal to Barry is his motivation, and so Barry, who informs Team Flash (they believe him this time) is left to wait for The Thinker’s next move. 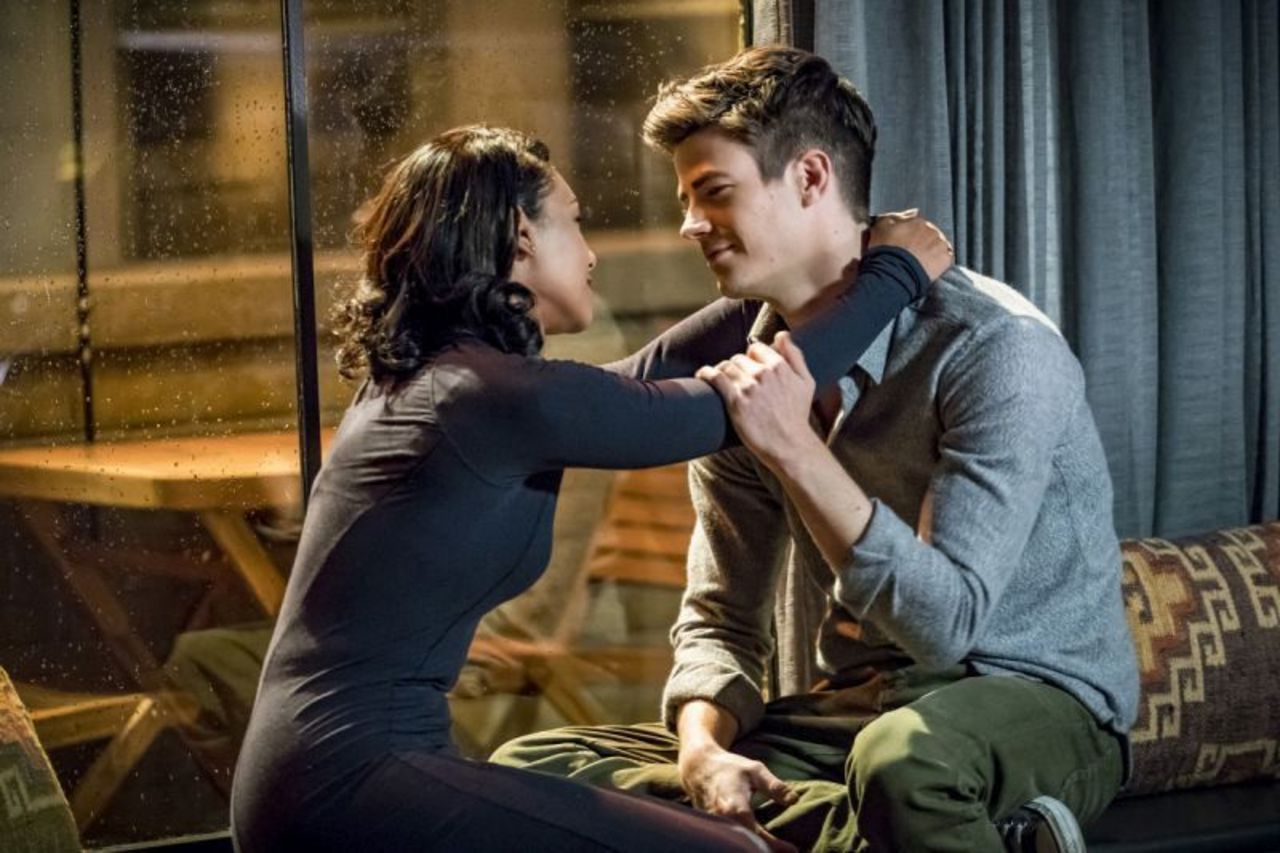 With all the Thinker business going all, it was nice to get an update on Iris and Barry’s wedding, which is set to happen soon (within the week). Iris, who is working to put the last touches on their wedding, does an excellent job of being there for Barry as he anxiously ponders what machinations The Thinker is cooking up for him. Iris reminds Barry that they can get through anything together because they are the Flash and that their focus should be on getting married and being happy. Unfortunately for Iris, promos for the upcoming episode suggests that she and Barry’s wedding will be less than perfect. But alas, that’s a discussion for another day.

Wally West is Back!

The rumors were true! After a short hiatus, Wally West is back on Team Flash! Whether his stay is permanent is unknown, though it was interesting that Ralph Dibny was absent this episode. Wally’s re-introduction to the team hopefully means that he will be utilized in a compelling and fulfilling manner for the rest of the season. Let’s hope he found what he was looking for during his absence and has regained his speedster/superhero mojo.

All in all, this episode was fun to watch and added much-needed meat to the character of The Thinker aka Clifford DeVoe. Now that the cards are out on the table, it will be interesting to see what The Thinker is after and why he holds a grudge against Barry Allen.

• What’s going on with Kid Flash’s hair?
• It’s interesting that The Reverse Flash recognized The Thinker and thanked him for his work during the flashback scenes of the episode. Does this mean that The Thinker will exist as a villain in the future?
• They better not ruin Iris and Barry’s wedding with some BS Nazi cameos as suggested in the series’ promos.
• Once again, there were barely any interactions between new besties Caitlin and Iris.