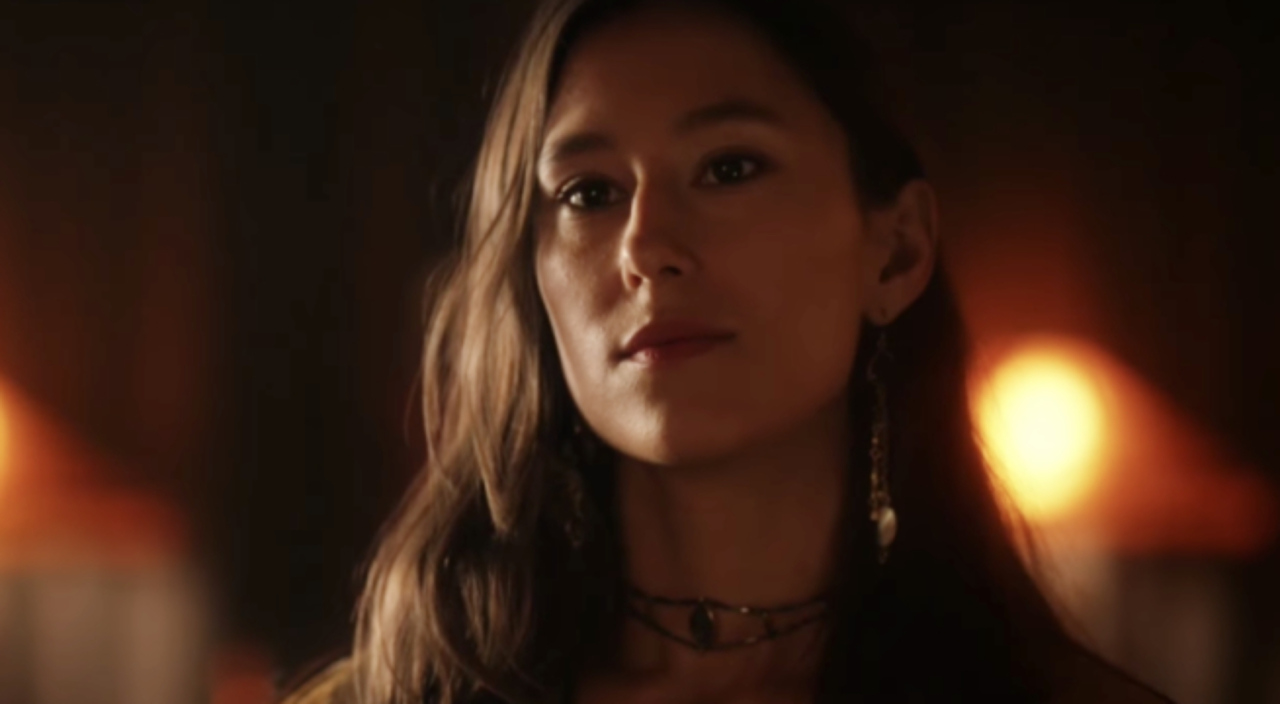 I started watching “When Harry Met Harry” with hopes that the episode would be an improvement from what has become a mediocre fourth season of The Flash. Large narrative plot holes abound and characters that could be developed into interesting and fun heroes (Wally West) have become victims of poor writing. Yet, I am determined to hang in there for those episodes in which Barry, Iris, Joe, Cisco, Caitlin and company are allowed to shine. This most recent episode dampened my expectations, and left me flabbergasted and frantically searching social media to see how others felt about this sixth episode of the speedster series. Let me explain.

Black Bison fulfilled tropes while the episode policed the definition of activism. 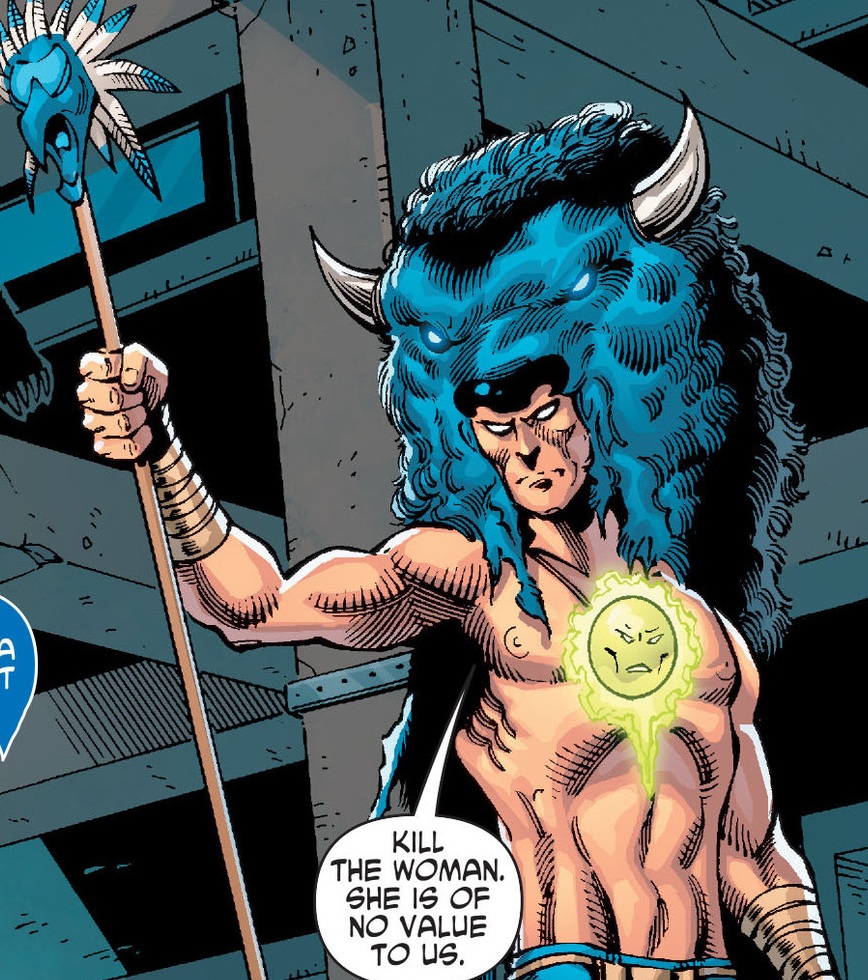 Black Bison from the comics.

The main problem with this episode, though I won’t begin to pretend to speak for indigenous peoples, was the way Black Bison was introduced and portrayed in contrast to the white hero narrative manifested in Ralph Dibny. Black Bison, a Native American anti-hero from the comics, is reinterpreted as Mina Chaytan (a Lakota woman) portrayed by Chelsea Kurtz. Chaytan is a former professor fired from academia for her activist work, which is implied as radical and inappropriate. Instilled with powers from Barry’s dark matter bus, Chaytan gains the power to animate effigies (statues of predatory cats, suits of armor, etc.), thus transforming into Black Bison. With her new powers in hand, she dedicates herself to retrieving the sacred objects belonging to her people. She does this by any means necessary, murdering several white men as she reacquires her people’s cultural items. Barry and Ralph attempt to thwart her, explaining that the items belong in a museum (yes, they really said that) and that they have to take her in for her crimes.

This violent activist trope is a dangerous one, especially when it comes to indigenous people and people of color. From #NODAPL to #BLM; when people of color have gathered together to fight for their rights, their efforts have been met with brutality; their actions described by the media as criminal and barbaric. The Flash introducing Black Bison as a murdering activist plays right into this stereotype.

(Let’s not forget that Arrow producer Marc Guggenheim wants to feature a “Black Lives Matter” episode of Arrow. This episode and Legends of Tomorrow‘s most recent episode prove the Arrow-verse doesn’t have the juice.)

“When Harry Met Harry” also delivers the message that activists should operate and behave in a certain “non-problematic” way,  implying that activism should always be law abiding. Now, murdering people is too much (why did they have to make Bison a murderer?), but what about “trespassing” as #NODAPL protesters did to protect cultural sites and waterways? What about blocking highways and shutting down airports as BLM protestors have done? Activism and protesting is rarely a comfortable experience; it isn’t meant to be. It is meant to bring attention to an issue. The Flash could have explored this narrative in an interesting way (hire indigenous writers!), but instead, the first time indigenous activism is mentioned on the show, the perpetrator is a villain.

With everything going on with the Andrew Kreisberg situation, it is interesting that the writers of The Flash would think introducing a character like Ralph would be prudent. Ralph spends the episode being over the top, referencing women by their measurements, and being his disgusting, misogynist self. All the other characters seem annoyed by it, but no one calls him out for his behavior! The first time Ralph referenced Caitlin by her measurements, he should have been fired! Doesn’t Star Labs have EEO policies? Ralph is such a disgusting character and I’m sorry Hartley Sawyer has to play him.

So, you have Ralph and Barry chasing down Bison, who does stuff like reanimate T-Rexes and riot gear (interesting choice on the riot gear) to reclaim her people’s cultural items, but murdering people and hurting children along the way, cementing her role as a villain. Then you have Ralph, a sexist, telling her what’s right and wrong. And finally, in the ‘big fight” with Bison, Barry and Ralph use Bison’s respect for her people’s culture to capture her, providing the episode’s most interesting scene: Barry tossing a ceramic bowl, Bison reaching for it, and Barry handcuffing her outstretched hands. Damn. Again, what were The Flash writers trying to say here? The episode eventually ends with Bison rotting in a jail cell somewhere while Ralph is afforded the opportunity to return the artifacts to her people.

“When Harry Met Harry” felt so problematic and the fact they decided to go all “Dances with Wolves” with its conclusion left a bad taste in my mouth. And to air it during Native American Heritage Month, WTH?! I searched Twitter and it seems like many folks agreed that “When Harry Met Harry” had things twisted in more ways than one.

So Ralph, the “hero”, constantly objectifies women and doesn’t have common decency… but the black bison, “the villain” wants to avenge her people and reclaim their historical relics. Is it Opposite Day or something? #Theflash #datflash pic.twitter.com/D9RPXFvI4B

.@FLASHtvwriters The misogynistic pig is the hero in training, but the oppressed Native American woman is portrayed as the bad guy. This episode is trash. Do better! #TheFlash #BlackBison

It was so stereotypical and narrow minded. It was also, once again, a way to frame Native people as a figment of the past. And of course, she was a villan… apprehended by the nice white savior… I mean hero. ?

The narrative explored this episode was so loaded, and I would like to hear what indigenous folks felt about it. In the meantime, I would encourage the writers of The Flash to do better.

• I don’t feel confident that artifactual aspects of Lakota culture were adequately portrayed on the show.

• What was up with Barry revealing himself to that robber in the beginning of the episode? He literally sped him away without a mask.

• The whole Council of Wells storyline fell kind of flat, though I did enjoy Tom Cavanagh’s imitation of a Wells Matthew McConaughey.

• Why is Barry not as hard on Ralph as he was on Wally West? He’s downright patient!

• There were absolutely no real interactions between new besties Iris and Caitlin. Go figure.

• Can Ralph just quit the team and hop on over to Legends of Tomorrow or something?

The Flash airs Tuesdays on the CW.