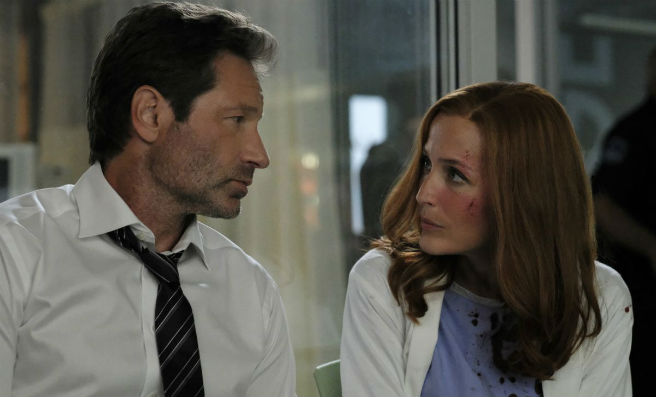 Let’s get right down to it, X-Files fans: how could you Chris Carter?! How could you do this to Scully? Scully who has gone through so much during this series. Emotionally, psychological, and physical trauma and now this. We learned at the end of this episode that William, long thought to be the product of Scully and Mulder’s on and off again relationship, was not Mulder’s son after all. He was the result of the CSM abducting and forcibly impregnating Scully. X-Files has been no stranger to retconning their own history or at the very least shadowing it in misdirection and mystery. This new change to the canon was a step too far, in my opinion at least. Now that I have that off my chest, let’s get to the episode.

Previously, on the X-Files, the world was ending. As a contagion swept the globe, a desperate Scully tried to reach an afflicted Mulder with the cure. The episode ended with Scully staring up into the sky at what looked like a UFO, Mulder possibly dying behind her.

So what happened with Scully and Mulder? Did Scully actually see a UFO? Well, we don’t know. At least at first. EMTs work to revive an unconscious Scully. She suffered a seizure and collapsed in Mulder’s office. Mulder is fine. Everyone is fine. Also, her inflamed brain is flashing ‘find him’ in Morse code. Is the ‘him’ William? Skinner thinks so. Mulder refuses to entertain even the possibility, choosing instead to hold vigil at Scully’s bedside.

Scully wakes up and is obviously disorientated. The events of “My Struggle” I and II, the Spartan virus, all of it were visions. The show essentially wiped the slate clean from last season’s finale. For Scully, though, they still feel like fresh memories. She tells Mulder about what she saw, what she believes will happen. She pleads with Mulder to find the Cigarette Smoking Man before he kills him. Mulder listens to her but with Scully’s health in balance, he wants to talk to the doctor before jumping in a car.

Surprisingly the doctor is willing to entertain the idea that the visions may be causing the seizures and not the other way around. This doctor has seen stuff — government experiments on people, superhuman abilities. I want to know more about what goes on at her hospital. Scully is ready to check herself out right then and there to figure out what is going on. Mulder almost reluctantly tells her “I’m on it,” hoping to keep her in the hospital. This pretty much defines their roles in this episode. Scully, out of commission and lacking pretty much any agency and Mulder, on top of it. Back to Mulder, he quickly picks up a tail (nothing like a tail to convince you that your partner might be onto something) outside of the hospital but turns the table and follows the tail back to a mansion in South Carolina. He started the trip doubtful and finished it fully convinced CSM was not only still alive but most likely in the mansion. CSM is like a cockroach, he can’t die.

In the mansion, Mulder finds a cigarette smoking man but not the one he was looking for. The man, Mr. Y according to IMDB, is one of the last members of the Syndicate, the shadow government group who was responsible for pulling the strings behind the scenes in most of the series. They were killed by the alien rebels except for apparently, Mr. Y. He and his associate, Erica Price (Barbara Hershey), have a plan and that plan is for Mulder to kill CSM. They’re banking on their familial relationship allowing Mulder to get close to him. Mulder wasn’t on CSM’s save list so I wouldn’t bet on his close kinship with his son. They tell Mulder all about CSM’s plan to wipe out most of humanity to try to convince him. Having dealt with his fair share of shadowy government agents, Mulder quickly guesses that they have an agenda of their own. An agenda CSM is threatening. Mulder leaves in disgust.

While Mulder goes on his quest to find a ghost, Scully goes on her own quest to find answers. Spoilers: it’s a very quick and mostly useless quest. She is visited in the hospital by Jeffrey Spender. When we last saw Spender, he was entrusted to hide William. Also, he looked a lot worse. The plastic surgeons have been kind to him. Now someone is looking for William and attacked Spender to get to him. Spender can only give Scully the last name of the adoptive parents. Scully checks herself out of the hospital strongly against doctor’s orders. The doctor is proven correct when Scully soon collapses again on the floor of Mulder’s office after another vision. Despite this, she still chooses to get in the car. To find William? How, girl? She suffers another vision and crashes. No surprise there. She’s thankfully brought back to the hospital by Agents Miller and Einstein, who witnessed the crash.

In Scully’s vision, we see Skinner confronted by Monica Reyes and CSM. I keep coming back to why Monica is doing this. It barely makes sense but we have no choice but to go with it. They want to make Skinner an offer. Once again CSM’s plan to kill off humanity save for a select few is revealed. Who doesn’t know about this plan at this point? CSM offers Skinner immunity to the pathogen if Skinner will find William. That’s all in Scully’s vision. The cracks in the trust between the three are getting larger. What happens after, we see later but Scully doesn’t. Skinner refuses to turn on Mulder and Scully. At least it seems that way at first. He demands to know why CSM wants William. That’s when CSM drops the bomb about Scully and William’s true parentage.

“I’m not a bad man. More a practical man,” CSM said in his opening monologue. A monologue that established once again how much of a role he’s played in world politics and critical events including faking the moon landing as well as dropping his real name. The speech ends with the ominous lines: “I don’t ask for loyalty and trust, the fleeting bonds of men. I ask only for the years to show my sons and their sons I was right. What their father did, had to be done.” Of course, he means all the evil stuff he did to get to the point where he was willing and able to wipe out humanity but also it feels like what he did to Scully. Mulder will never forgive him for that.

Meanwhile, Scully is attacked in the hospital by Mr. Y’s henchman. Forget the search for William, he’s out to kill Scully and almost succeeds if not for Mulder stepping in at the last minute. She reveals to Mulder that her visions are coming from William who we catch a glimpse of at the end of the episode.

So where does this leave us? William being hunted. CSM’s plan still on track. Mulder and Scully possibly betrayed by Skinner. The rest of us betrayed by new canon. Yeah, I’m still upset. This is one of two mythology episodes this season, the other being the finale so we have some time to grapple with these new bombshells. Until then we follow what Scully said to Mulder:

“We do our work. The truth still lies in the X-Files.”