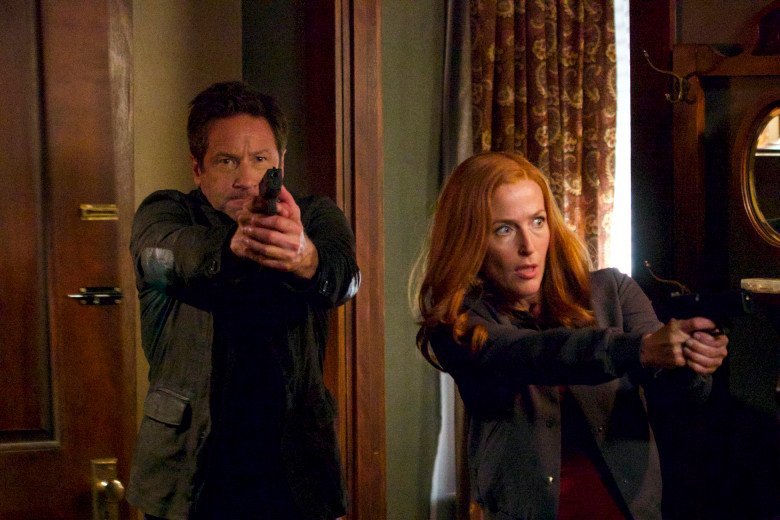 This latest episode of The X-Files begins with a cute scene between Mulder and Scully. They’re sleeping side by side on the couch in Mulder’s house. Interestingly, Scully will later refer to it as ‘our home’ to Skinner. Has she moved in? I live for these little moments of domesticity between them. 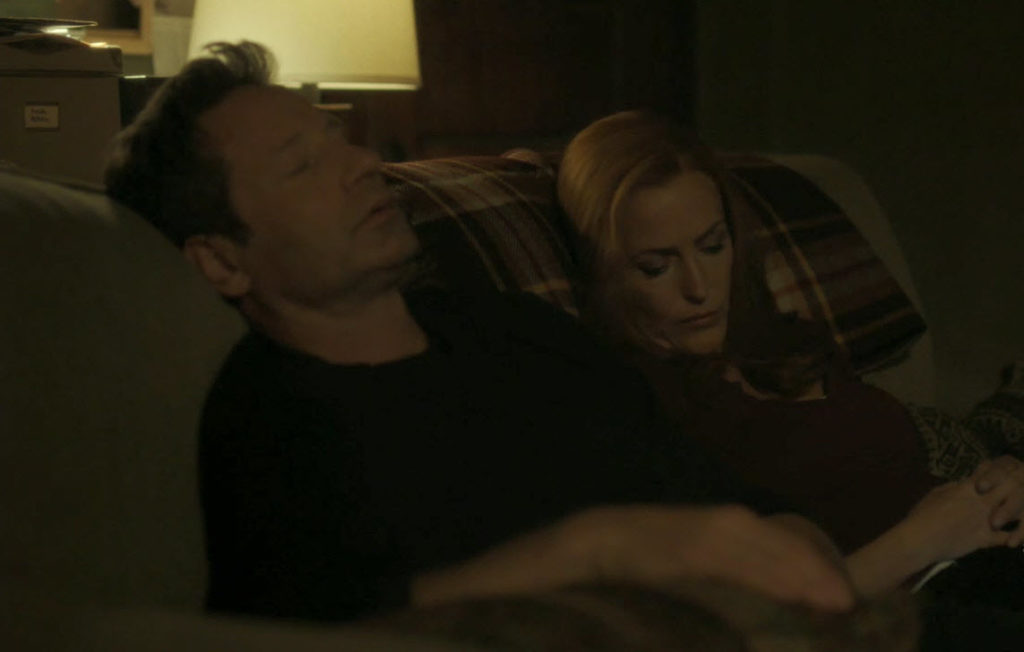 A mysterious video message from Richard Langly, one of the Lone Gunmen, wakes them. Langly made an appearance last season in Mulder’s drug-induced hallucination but otherwise is very much dead. “Am I dead?” Ghost Langley asks because he hasn’t gotten that message yet. “If I am, they know that I know.” He has that right-on-time intel because they’re soon attacked by three armed men. Scully dives under a table, firing at the three men storming through the door, while Mulder pushes the couch at them and runs upstairs. They take out two of the men. The third one, a strange looking older man, flees. It’s nice to see Mulder and Scully kicking ass.

Just when they’ve dispatched the gunmen, another team rolls up led by a man credited as Commander Al. This time they have too many people for Mulder and Scully to take on, though they do try. After taking Mulder and Scully down, they ransack the place looking for Mulder’s phone. One of my favorite things about this episode is that it showcases how well Mulder and Scully function as a team. Handcuffed together, pinned to the ground, and surrounded by men with guns, they still manage to fight their way up and out of the door, jump over the porch and run into the woods. Let me say again that they did all of this while handcuffed together.

In the woods, they run into Skinner. It’s evident in the interactions between the three that the ramifications of the last episode are still playing out. There’s a distrust of Skinner’s loyalties. They can get information from him but they won’t go with him. In Skinner’s defense, he did run out in the middle of the night to meet them. Skinner tells them that the group that attacked them is called Purlieu Services, an American security contractor headquartered in Moscow. Thanks to the new administration, this group of Russians has ascendancy over the FBI. They can’t go back to FBI headquarters, instead, they visit Langly’s grave in Arlington Cemetery hoping to find some kind of clue to what’s going on. They find one. Incorrect birthdays lead them to the grave Deep Throat, Mulder’s old confidential source, where they find a memory medallion.

In cemeteries, cafes, and bars Mulder and Scully attempt to solve the mystery of Langly’s death and afterlife. The memory medallion leads them to New York’s Long Lines Building aka Titanpointe, an NSA surveillance station. To find out more about it, they need the X-Files but they can’t just waltz into their office. They need Skinner. “We need your help, Walter,” Scully tells him. “Even if we don’t trust you.” Really, Scully? Through Skinner, they learn that the X-Files have been digitized. Good because it allows them to access the files remotely. Bad because it was done by Purlieu Services who are now aware of all of their casework and also want them dead. They had bits and pieces of the puzzle but it wasn’t until Langly contacted them again that they truly understood what was happening.

After last week’s episode, a break from the ponderous mythology of this show is refreshing. The ongoing conspiracy is a small thread that runs throughout an episode that mainly focuses on the world of artificial intelligence. This topic was previously covered in the season 5 episode “Kill Switch,” written by notable cyberpunk authors William Gibson and Tom Maddox. Unlike that episode, in which a rogue AI begins killing people, “This” focuses on how we can achieve a kind of immortality through artificial intelligence. You won’t necessarily live on but a version of you who thinks the same as you and has all of your memories can live on after death as data on a server.

Langly’s thought processes were copied and uploaded into a simulation he helped create. He did it to live forever with a surprise significant other, Karah Hamby, a professor of mathematics in Bethesda, who pops up only to be quickly killed off by the strange old man who Scully finally kills. On the surface, the simulation seems perfect, filled with favorite foods and endless concerts, but below that are inconsistencies that point out the falseness of their reality. There’s also an insidious layer to the simulation. It wasn’t made just for a select few to be happy. The people in charge have been taking advantage of the minds they have there. Using their intelligence to create science that will help the elite survive what’s to come. Langley tells them the location of the servers the simulation is housed — Titanpointe. He wants them to destroy it. Mulder and Scully take the bus, of all things, to New York where it’s located.

At Titanpointe we see the return of Barbara Hershey’s Erika Price as the one in charge of the simulation. Through her, we find out that a mind can be uploaded through a phone. Consent is unnecessary. They’ve been using their technology to capture some of the best minds in the world. All of that knowledge and expertise in the hands of a shadowy government agency. It can’t be good.

While Mulder has a philosophical discussion with Price about the nature of her project and the end of humanity, Scully makes her way to the server room, knocking out guards when necessary. This is a welcome change after watching her be a mostly passive participant in the events of the last episode. Mulder convinces Price that he’s on her side. Before he can do what she wants though (kill his father), he wants to see the server room. Once there, he fights Commander Al while Scully turns off the server. They won, right? It seems that way at first. They take Al back to the FBI bureau and return with agents to arrest Price and take over the servers. Only she and the servers are gone. In the end, they are left with Mulder’s messy house and a few more answers than they had before. They end the episode as they began it — on the couch with another call from Langly.

The strength of this episode lies in relationship between Mulder and Scully. With little resources, they were able to solve the case (with a little help from Skinner). Speaking of Skinner, the ‘we don’t trust him’ plotline is played out and I wish it would pack its bag and walk its way out of this season.  The quick and often funny banter between them was another bonus. I enjoyed these moments more than the case which while interesting, the subject matter was handled better in “Kill Switch.” The episode also comments on the current political situation with mentions of the FBI’s unfavorable standing with the administration and Russian private security officers running around saying Americans would have been fine losing the Cold War if they could have made money off of it. All and all, “This” was an improvement over the premiere.