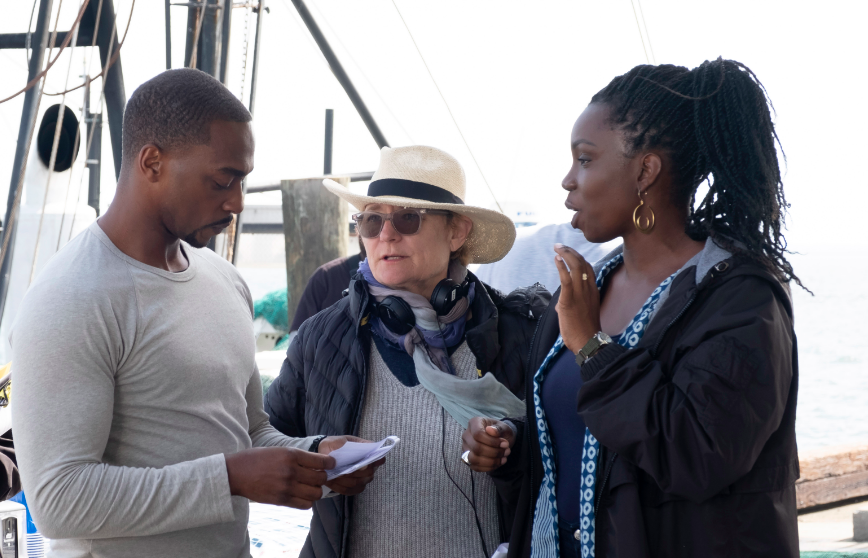 Don’t worry, you’re not alone. We all miss WandaVision. But, cry no more, the next Disney+ Marvel series is almost here. The Falcon and the Winter Soldier is the next show ready to play up the comic book love and test our fragile emotions. In a world where streaming services are saying “no theater, no problem,” Marvel fans are just as anxious for this mini-series as we are for a full 2.5-hour film.

It’s the waiting for each episode that gets to us. So, in the meantime, here are 10 gems we picked up from The Falcon and the Winter Soldier press conference we hope will tide you over. In attendance was Marvel president and producer Kevin Feige, director Kari Skogland, head writer Malcolm Spellman, Anthony Mackie (Sam Wilson), and Sebastian Stan (Bucky Barnes). Check out the content below.

Kevin Feige: This is the second one that is coming out onto Disney+ but, as Malcolm and Kari well know, it was our first one that we started.

Feige: It really starts off with a bang. We kept saying, “If we’re going to do a series with Falcon and Winter Soldier in it, we need to at least start off with the best action that we’ve ever seen.

Sebastian Stan: It was pretty on par with the films, I felt. Actually, even more evolved and intense, I would say. It feels like the action really intensified in a lot of ways. We’re always finding new ways to have them evolve with their action sequences. But it’s tonally the same as the movies.

Anthony Mackie: It’s more hand-to-hand combat. It’s more physical. It’s more assertive. It’s more of us utilizing our strengths, instead of something else. So, because of that, the stunt guys had a field day. Wyatt [Russell], Sebastian, and I did a lot of stunt training to be able to go in, and a lot of the stuff you see is us. But we had amazing stuntmen to go in and kick ass for us.

Feige: We’ve seen a lot of cool action with both of them before. And more importantly, as I think you also see in that first episode and will see much more over the course of the series, we learn who the heck they are. We know a little bit about poor Bucky Barnes and what he’d been through. Sam Wilson, other than that he likes the job, is an inherently moral man, had been in the service, and worked with PTSD, we didn’t know much about him. So, it was really an opportunity to go deep.

Kari Skogland: From the beginning, we were making a six-hour film. We just kind of figured out where to snip it at certain hour marks. Malcolm and I did a lot of looking at shows, but primarily movies, that were in our paradigm because we have a buddy-cop kind of relationship going on. So we looked at some of those. I looked at a lot of different influences to help me put it into a box. I looked at David Lean. I looked at Midnight Cowboy. So, I really go very wide and then try to put it in a pot and sorta stir it and come up with something that is uniquely signature for our look.

Malcolm Spellman: There was about a 12-second moment in Civil War where it feels like every single Marvel fan, Kevin Feige, and all his cabal partners knew that these two guys were going to be able to support a movie or franchise. The buddy-cop or, the buddy-two-hander genre, what we loved about them is the range tonally. You can go from something as gritty as 48 Hrs. to as comedic as Rush Hour, but in between there is that first Lethal Weapon and that first Bad Boys. What we liked about it was it allows Sebastian and Anthony to do what they do and create that magic, but also allows the broader creative if you need to take on real issues, or if you need to get into something very Marvel-y, it’s a very durable form of storytelling.

Stan: We’re really finally kind of zooming in on [Bucky’s] quest for identity and in terms of really accepting his past and sort of re-educating himself about the world that he’s currently in, the ideals and principles he might’ve lived by, and been driven by at one point that perhaps no longer serve him the same way. The whole subject of PTSD and the experience that they both share as soldiers, as men who have served, is one of the things that bring them together. There’s a bit of an honor code between them.  Even though they come from different ideas or opinions about things, there’s mutual respect. PTSD grounds both of these characters in very realistic ways.

Feige: If we were able to do another season, there are certainly ideas. The slight difference, of course, is as you’ve all heard me say, and I think is becoming clear with WandaVision, that they really will go back and forth between the Disney+ series and the Marvel Studios Features. So, where characters show up, and how, sometimes will be in a direct Season 2, sometimes will be in a feature, and then into an additional season. We’re just not gonna say who does what right this second.

Spellman: What worked out really nicely was [it’s] where Endgame leaves off. Dispatching Thanos has created a situation where the entire world is dealing with one single issue, which is very familiar to what’s going on today. Everything is born from that. The villains in this series are responding to that. In fact, every villain in the series would tell you they are a hero. The heroes are responding to that in their personal lives. That story plot, it’s all born from one single, organic thing. This continuum from what happens after Endgame sort of galvanizes and affects everybody on the planet at the same time and creates a nice cohesion, and direct lineage to the MCU.

Feige: We’re all fans within Marvel Studios. So, it really is kind of the same balance that we’ve been trying to strike for the last ten-plus years. Figuring out, yes, how to exceed expectations, but also how to subvert expectations. I’ve never thought of it in terms of what people want versus what they need. It’s just, how do you provide the best, most engaged level of storytelling to the audience? Sometimes that is subverting what they expect. There are times where something comes up totally out of left field that even we weren’t anticipating. Like, for instance, an aeronautical, aerospace engineer is asked about. That turned into a whole thing. That was new to us. But other than that, we’re usually quite in sync with what people are expecting, and either delivering on that or surprising and subverting that.

Feige: We were pretty committed even before the success of WandaVision. We’re in the works on 10+ series and have been for a number of years now. It again is just another marker for us staying the course, as well as the fans willing to go with us to new unexpected places, which is what excited us about the opportunity to do a series on Disney+, now with The Falcon and Winter Soldier that you’ll see soon. So it was a nice boost of confidence that we can continue down that path we started a few years ago.

The Falcon and the Winter Soldier will premiere on Disney+ March 19, 2021.