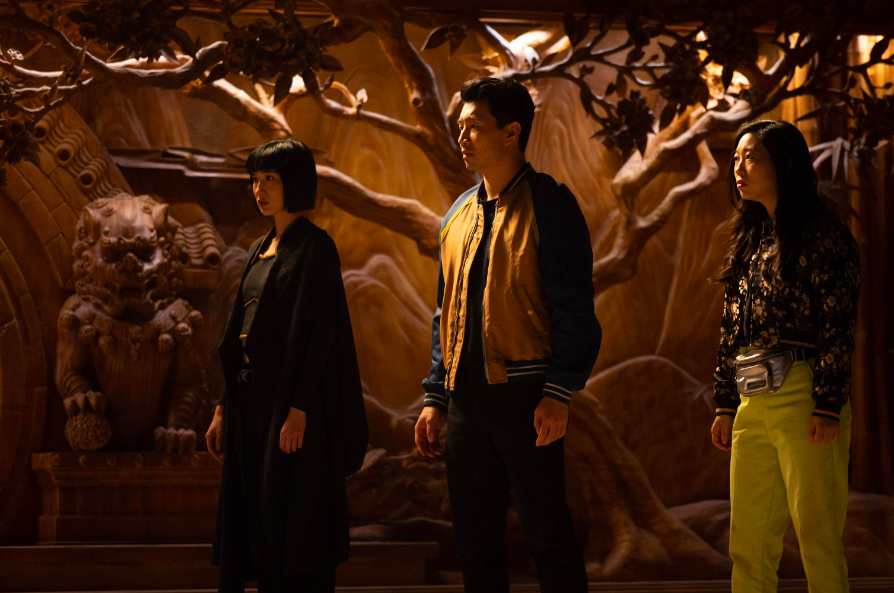 Shang-Chi and the Legend of the Ten Rings is the new upcoming film from the Marvel Cinematic Universe (MCU). During the press conference, it became clear how much fun the cast had together and how important it was for the film to get the respect it deserves. In attendance was president of Marvel Studios Kevin Feige and director Destin Daniel Cretton. Among the cast members were Simu Liu (Shang-Chi), Awkwafina (Katy), Meng’er Zhang (Xialing), and Sir Ben Kingsley (Trevor). While a lot of the plot of the film was hush-hush, read on to get to know the cast and crew behind this film a little more with the top ten takeaways from the press conference. There are some really great nuggets in there about the MCU.

Kevin Feige: “Casting Robert Downey Jr. was both the biggest risk and the biggest, most important thing in the founding of the Marvel Cinematic Universe. Without Robert we wouldn’t be sitting here today. I really believe that. He was an amazing actor, everybody knew he was an amazing actor, but he hadn’t been an action star. He wasn’t a marquee star necessarily, and we quickly realized the risk, I’ve said this before, was not casting him. Jon Favreau really had that vision for that movie, and for Robert in that role. That decision and the success of that decision, I think, empowered us with further risks and further choices.”

Destin Daniel Cretton: “That job affected my entire life, my worldview. I feel like the stories that I am drawn to are a combination of humor, optimism, but also not shying away from the very real darkness and pain that we all experience as humans. I think this movie really does encapsulate a lot of the things that I really believe in.”

Sir Ben Kingsley: “When you hear Destin, you know that the motives behind telling this story are pure, crystal clear, lucid, pure motives. Their motives are enhancing and they’re not patronizing because they do introduce, in a beautiful way, memory, ancestry, loss, and families torn apart, reunited, and reconfigured. All this is from Dustin’s heart, and Kevin’s heart, and the writer’s heart. If your motives are pure as a storyteller, the angels will come to assist you with that story. To quote a great authoress, whom I admire greatly, ‘To tell a story is to heal.’ I think that this story, because it’s so beautifully told and so rich, will ultimately be healing because it’s not propaganda. It’s just a really beautiful story. As soon as I arrived on set, the fact that my colleagues were from a different culture was immaterial. Completely immaterial and irrelevant. We are actors together. We live on empathy and transformation, and this is our currency. All the rest is irrelevant, and if we can demonstrate that energy, I think it will ultimately be soothing and healing, and, actually, people will realize there’s very little difference in storytelling and very little difference in our hearts.”

Meng’er Zhang: “This is my very first film experience. I am so lucky to work with all of them. I asked Sir Ben a lot of questions on set, and I asked him that question [the differences between stage acting and film acting], and he said, so beautifully, ‘When we are on stage we are landscape artists, and when we are in front of the camera we are portrait artists.’ I think that just gave me a very clear image. I just learned so much. I literally took notes everytime I talked with Sir Ben.”

Simu Liu: “Well, I mean, I thought it was a good signature, like a nice little calling card. I thought it couldn’t hurt. I was auditioning for a Marvel movie, which was about a superhero. I thought if I could show them that I could pull out the superhero pose, maybe that would help.”

KF: “My producing partner on this film, Jonathan Schwartz, who for some reason is hiding in the background here today, has worked on this movie for a long time. We wanted to do it for both of those reasons to bring this specific character into the MCU. But, just as importantly, to bring representation of another kind to this film. That was really what Destin brought in his pitch, which was, ‘Yeah, actually, cool, Marvel, but it was really the story of this father and son.’ Someday, you should put that presentation out into the world, actually, that he put together because it was as beautiful as the final film.”

DDC: “I think that what is extra relevant to the culture is that this is a Marvel film. If we were not putting Shang-Chi, shoulder to shoulder with all the amazing other Marvel superheroes that we’ve come to love in the past, that would be, to me, a big disservice to the culture and the characters. So both I think are equally important.”

DDC: “I really personally connect with Shang-Chi’s journey. I love that this is a superhero that doesn’t get splashed with chemicals to get his superpower, that it is a journey of self-discovery, of growing up of learning how to finally deal with pain that he’s been running away from his entire life, and that when he is finally able to look inside into his past and embrace good, bad, the joy, the pain, and accept it all as a part of himself. That’s when he finally steps into his big boy shoes. I think that’s what we’re all doing as humans in some way or another.”

DDC: “I was scared of stepping into a big studio movie like this, and scared of what it might do to me, the pressure, will I cave. I had a lot of fears. The thing that Ryan said to me, which really eased my mind was, ‘The pressure is hard. It’ll be the hardest thing, potentially, that you have done up to this point. But, none of that pressure or none of those complications come from the people that you’re working with.’ That’s when I found that this is a very special place to work. Not to toot Kevin’s horn, but there is an environment of curiosity, of exploration that comes from the top down. There is no fear-based mentality at this studio, which has really allowed us to take risks and chances and be able to instill that same fearless exploration with everybody involved in this film. I think that’s a huge reason that the movie turned out the way that it did.

Shang-Chi and the Legend of the Ten Rings will be in theaters September 3rd.