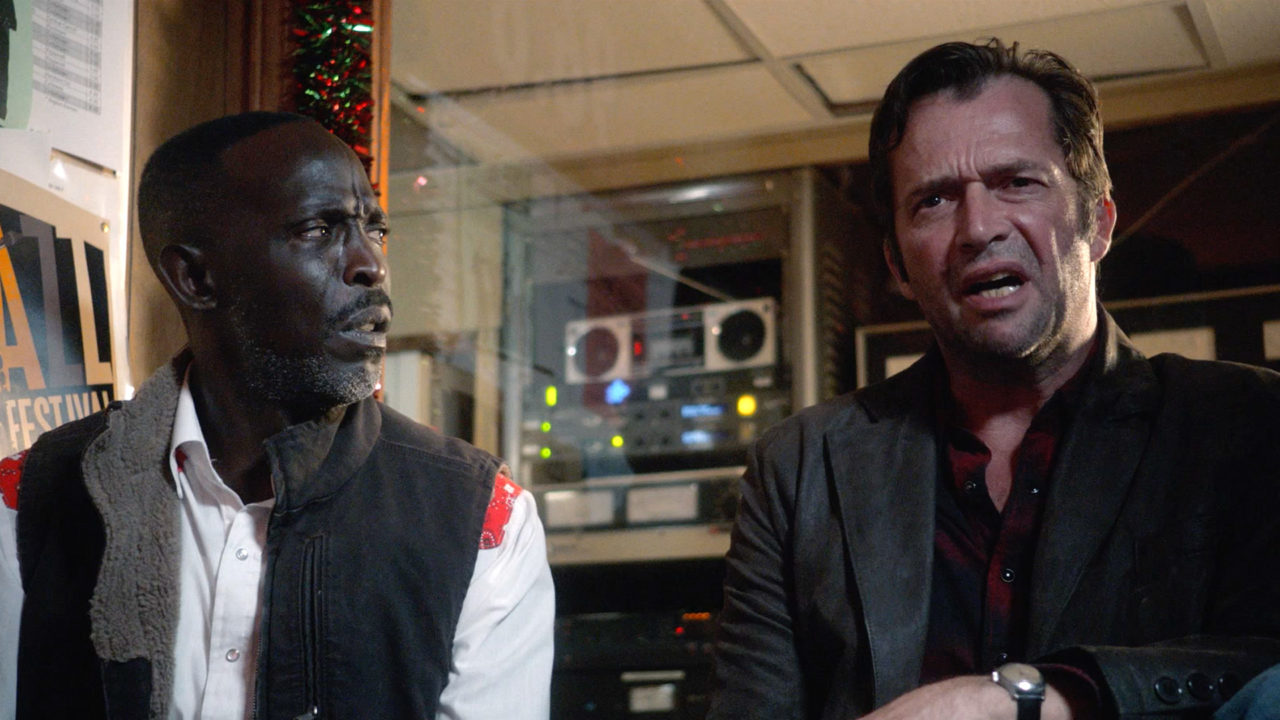 This week, there was so much happening on Hap and Leonard. Just as I tried to process one thing, another happened, wrenching my attention and my emotions in a different direction. It was a lot for one episode. Here are the top 13 things that were so much that I gotta talk about them again, after watching the episode.

The missing woman Florida is walking down the middle of the street in Grovetown. Remember, Grovetown is a hotbed of racist, they are slithering around everywhere like snakes in a nest. And there Florida is, in the night, wearing a white satin suit and heels, walking down the middle of the street. Why? Well, I know it’s over when somebody lights a fire. It’s not for light — the Klan came and brought their crucifix-shaped Tiki torch. Then she’s chased, by a monster truck. Just as it looked like they were going to get her…

I love how the episode is a long flashback to Grovetown, interspersed with a few minutes in the present. There, Hap and Leonard are awake after arriving home the night before. Both are terrified enough to be sleeping with weapons and keeping another body in the house for company. Both are so damaged from whatever happened that Leonard is peeing blood and Hap’s eye is swole! These small interludes remind us that despite the shenanigans the men get up to, something bad happened in Grovetown, something that almost kill both Hap and Leonard.

Fan of “The Very Smart Brothas” blog will know the “Darths” and Darth Tomi is the worst, aptly named after another problematic conservative who is not afraid to let her racist freak flag fly. Take a minute for a little research at The Root and come on back.  Darth Tomi is the deputy sheriff of Grovetown. Last week, Hap and Leonard went into the diner after getting into this eery-ass town. There is nothing, but white people and every white person watched the two men everywhere they went.

While they were staring so hard at every move Leonard made, I guess nobody saw who shoved a flagpole through the windshield of Hap’s car and spray paint the n-word on the side? Deputy Darth Tomi is on the scene to…write Hap a ticket and call for a tow to the “gee-raj”. Leonard’s eyes were as wide as mine in disbelief. How the hell did she miss the damage to the car??? Well, we all know Darth Tomi is colorblind — she don’t see race or racism. To her, the car looked like any other double-parked vehicle.

I have to stop right here and ask how everyone knows about this town and yet nobody has reported it yet or made a move to stop it? From the black couple cackling at Leonard for going to Grovetown last week to the Chief himself, there are black people outside the town who know it well. How is it allowed to stand? How?

I know WebMD and Medline can explain any ailment, even the one that drives this chicken-loving sheriff. For your own safety, though, don’t Google it. You will never be right again if you do.

I knew I recognized the face of the chicken-loving sheriff from somewhere. It was episode 6 of American Gods on Starz. Corbin Bernson played the god Vulcan, the ruler of his namesake town and namesake bullet factory where employees fell into the casing metal vats from time to time as a tribute. You know what, thinking back to Vulcan and his lynching references and gaslighting, I don’t guess playing this Sheriff Torqued Nut was too much of a stretch after all.

Or do you think he complied with Deputy Darth Tomi and just got the body ready? I hope he did something to help the case later.

When I heard that they were adding guest actor Andrew Dice Clay to the episode, I have to admit I was curious about what they were going to do with him. It would be hard to hide that think Jersey Shore accent, big glasses, and even bigger hand gestures in backwoods Grovetown. He’s a DJ, problem solved. He is also the first real interview and clue that Hap and Leonard had on their mission to find Florida. I hope you paid attention!

In the last episode, the Christmas ants were a riveting topic that Leonard’s houseguests (bodyguards?) spent way too long pondering. Maybe they stood too long around that smoldering crack house next door. The Christmas ants are back, and here they stall two meatheads from the junior racist of America until the chief returns Hap’s call. Leonard’s accent as the experts on Christmas ants was hilarious. And just enough to meet the meatheads’ idea of a stereotypical image of an African researcher.

This scene made my blood boil! As the family and community members mourned the dead body that the Undertaker took care of earlier in the day. Their solemn march and twilight burial had a melancholic beauty to it…Until Deputy She-devil opened her mouth. “They almost seem human, don’t they?” I wanted to scream, Really, b#$%h? She went on with her speech and it didn’t get better. I was yelling at her the TV and life after that scene and then walk away for a minute. Hap and Leonard did what few shows do — get me so upset to leave the room in the middle of a screening.

Before they left on their mission to kill Christmas ants “last seen marching two by two” down the highway, the men ordered and picked up their dinner. The black cook (WHO WAS ALSO THE UNDERTAKER) made it known that he packed something special. However, because of Junior Klansmen shenanigans, they didn’t get to eat until much later. A napkin, “She’s dead and you are next.”

So now we are at the end of the second episode with the third one just ahead. Let’s pause and gather the fact. Tell me who you think “done it”. Who do you think murdered Florida? Tag me on Twitter (I’m @SurviTeensNtots) with your answers. We’ll see who calls it by the end.

My pick is the Undertaker/short order cook. That napkin and the way he just complied with that she-monster deputy showed that he is hiding something while complying with the racist town and its dangerous people. Florida came to pick up a rare blues record too. Remember that. The old man might have seen an opportunity and took it. What do you all think?