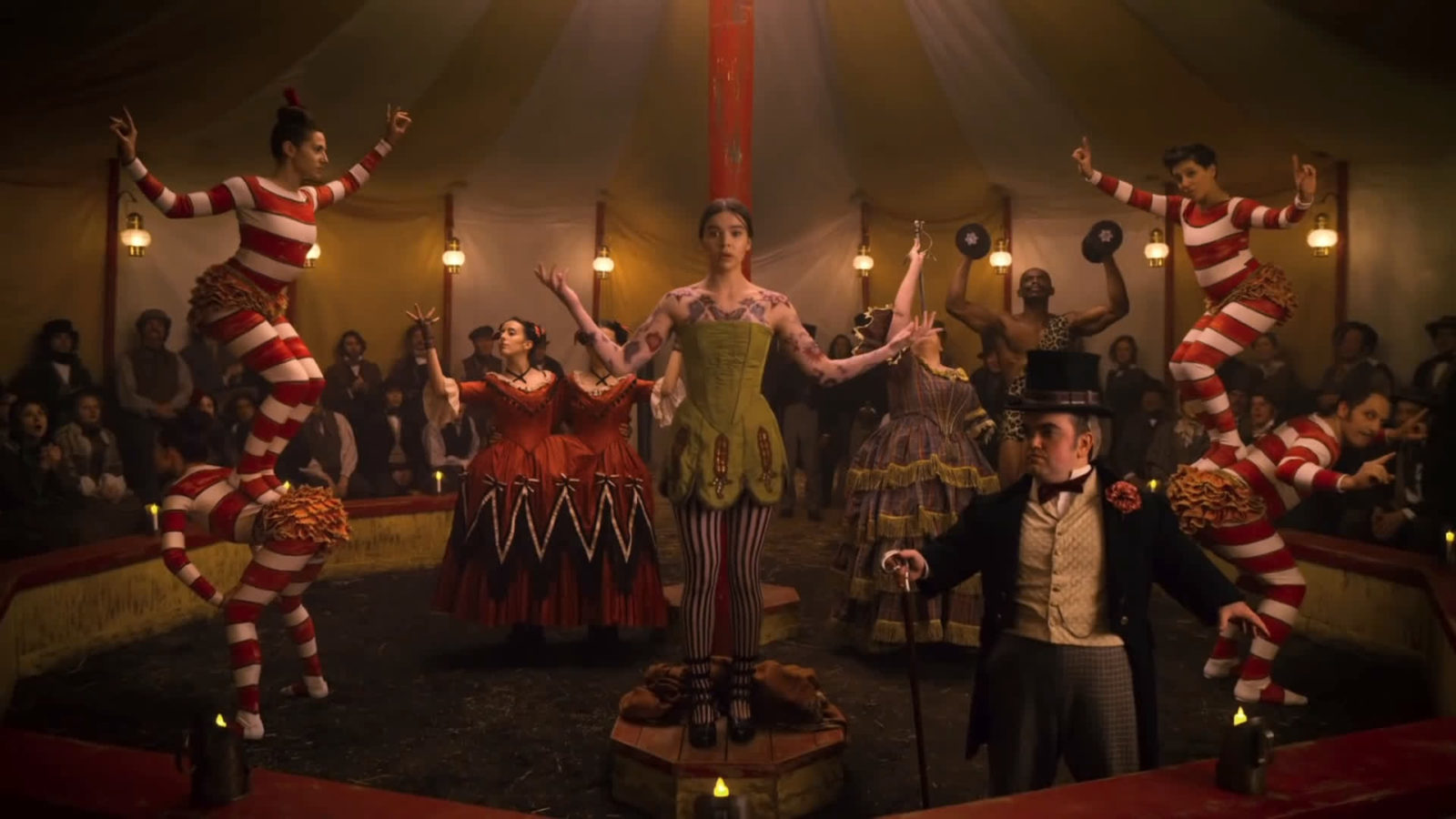 Happy Twin Peaks Day! Watching David Lynch’s cult series, its revival, and/or Fire Walk with Me is essential. After you celebrate, you might be looking for similarly surreal movies and shows. There are obvious choices like Stranger Things, The X-Files, Black Mirror, Wayward Pines, etc. But if you’re looking for something different, and want to expand your viewing beyond Lynch’s filmography, check out these darkly hilarious, scary, and downright weird titles.

1. The Woman in the House Across the Street from the Girl in the Window (2022)

Yes, the title is obnoxious. But I was surprised how much I enjoyed this series. It’s a parody of the countless books/movies about missing and dead women (or girls), starring Kristen Bell as Anna, the titular woman in the house. She drinks a comical amount of wine and shamelessly spends all day sitting in front of her window. The show manages to be a genuinely compelling mystery while still poking fun at the genre. Fans of Twin Peaks will enjoy the deadpan delivery of ridiculous dialogue as well as the actual moments of suspense.

This millennial murder mystery follows Dory Sief and her search for a missing girl she barely remembers from college. Feeling as though she has no other purpose, she dedicates all her time and energy to finding her. Dory’s boyfriend Drew and friends Portia and Elliott don’t share her enthusiasm but get dragged into the mess anyway. The four of them come across mysteries upon mysteries, stalkers, and a cult or two. It’s a dark comedy with the quirkiness of Twin Peaks, complete with eccentric characters and incredibly surreal moments.

Writer-director David Robert Mitchell’s (It Follows) Hollywood whodunit stars Andrew Garfield as Sam, an aimless Angelino who falls for his Marilyn Monroe-esque neighbor Sarah. After watching her frolic in the apartment’s pool, they hang out once, and the next day she’s gone. He spends the next few days following people who might know her whereabouts, decoding cryptic symbols, and slowly uncovering a Hollywood conspiracy. This film is reminiscent of Lynch’s Mulholland Drive, Psycho, and shares Twin Peaks’ “hidden darkness” motif.

Based on the novel of the same name, Shutter Island is one of those movies you wish you could see for the first time again and again. Martin Scorsese and Leonardo DiCaprio bring Denis Lehan’s neo-noir to life on screen with stunning visuals and a relentlessly ominous atmosphere. U.S. Marshal Teddy Daniels and his partner Chuck Aule investigate the disappearance of a female patient at Ashecliffe Hospital for the criminally insane. Teddy is no Dale Cooper, but he’s surrounded by mental instability in a secluded place full of secrets. He’s also plagued with disturbing visions. The dream sequences are honestly some of the best I’ve seen, perfectly capturing the bizarre images and abrupt transitions that never make sense.

FBI criminal profiler Will Graham (Hugh Dancy) spends his days examining grisly crime scenes and getting into the minds of psychopaths. The disturbing images stay with him, causing intense night terrors and sleepwalking. When he starts seeing forensic psychiatrist Dr. Hannibal Lecter (Mads Mikkelsen), things only get worse for him. Their relationship goes beyond doctor-patient into something toxic and thrilling to watch. It’s much gorier than Twin Peaks ever was but there’s no mistaking the similarities in hellish dream sequences and hallucinations.

Evil is one of the best procedurals today. Priest-in-training David and tech expert Ben recruit Kristen, a forensic psychologist who used to work for the DA’s office. Together they investigate supernatural phenomena for the Catholic Church, including demonic possessions and miracles. Given the nature of their work, each experiences their own personal nightmares and unexplained occurrences. It balances dark humor with creepy religious horror, offering some campiness and insights into criminal psychology. It’s been likened to The X-Files, which is, of course, influenced by Twin Peaks.

Jessica Biel executive produces this anthology series with the first season, starring herself as Cora Tannetti, based on Petra Hammesfahr’s novel The Sinner. One day Cora suddenly stabs a man on a beach full of witnesses. There’s no doubt she did it, but no one, including her, understands why. The commonality between the show’s four seasons is that the culprit’s actions don’t make sense and Detective Harry Ambrose obsesses over the lack of clear motive in each case. Its themes of suppressed trauma, delusions, and cultish behavior resemble Twin Peaks, particularly Fire Walk with Me and The Return.

There’s a reason Donald Glover’s genre-bending series has been called “Twin Peaks for rappers.” The city of Atlanta might not seem like a strange place, but Glover’s Atlanta definitely is. From invisible cars to a Black Justin Bieber, the characters encounter weirdness on the regular. Darius (LaKeith Stanfield) is the show’s visionary with his stoner logic and unapologetically odd personality. With its blend of hip-hop culture, disorienting situations, and eccentric (often scary) characters, Atlanta is a show that changes the rules of TV, defying expectations and making us laugh just as much as it makes us reflect.

Where to watch: FX on Hulu

A nameless woman (Jessie Buckley) joins her boyfriend Jake (Jesse Plemons) on a trip to meet his parents. Things are already pretty tense between them on the drive, but when they get to his parents’ home seemingly in the middle of nowhere, the awkwardness takes off. Jake’s mom (Toni Collette) and dad (David Thewlis), who are also nameless, strange behavior visibly irritates Jake and makes his girlfriend exceedingly uncomfortable. They’re a bit like Ben Horn and his wacky brother Jerry, with Mom prone to near Sarah Palmer-level hysterics.

I’m still not over the unjust cancellation of Misha Green’s horror masterpiece. Adapted from Matt Ruff’s novel, Lovecraft Country is set in Jim Crow-era America and follows Atticus Freeman as he discovers his extraordinary family lineage. Each episode explores a different horror subgenre — haunted houses, epic sci-fi adventures, creature features, etc. Then there’s racism, which is its own brand of horror. Witchcraft, secret societies, alternate realities, along with romance, untimely deaths, and collective trauma, all make this a show any Twin Peaks fan would love. Some may not want to get invested in a show with only one season, but it’s beyond worth the watch.

Here’s another amazing show that ended too soon. Set in the Depression-era Dust Bowl, this series follows two separate stories — a traveling carnival that picks up a young man with unearthly abilities and a Methodist preacher with similar powers. Both have prophetic dreams and visions about the other, slowly revealing their connection. It’s a story centered on magic and the constant fight between good and evil. The carnival is led by Samson (Michael J. Anderson), who you’ll recognize as The Man from Another Place in the Black Lodge.

After the events of Avengers: Endgame, Wanda and Vision conceal their metahuman and android identities while living a blissful suburban life in the idyllic town of Westview. This Marvel limited series has obvious sitcom influences but incorporates hints of psychological horror like The Twilight Zone. It’s the small-town weirdness that reminds me of Twin Peaks, as well as the combination of modern, old-fashioned, and otherworldly.

Where to watch: Disney+

Here are some of DC’s most bizarre characters with superhuman powers that don’t always seem useful. The team is made up of outcasts with tragic stories who find themselves in a number of weird places, including purgatory, both the past and the future, and Danny, the genderqueer street with sentience and the ability to teleport. The various supervillains they face are equally strange, or even more so, from sex demons to the omnipresent narrator constantly altering reality. Season 3 introduces the Sisterhood of DaDa which is all about the avant-garde. If you’re unfamiliar with the comics like me, you’ll be just as delightfully shocked as I was with each episode. Behind all the fantasy and absurdism are deeply human emotions, which I find very Lynchian.

If you’re familiar with Emily Dickinson’s poetry, then you already know how wonderfully dark and weird she was. The series is set in the 1800s but uses modern slang and music to show the rebellious poet was ahead of her time. She’s obsessed with Death, played by Wiz Khalifa, and harbors an intense (and forbidden) love for her best friend/brother’s wife, Sue. Having notable guest stars as literary figures is one of the most enjoyable aspects of the show, like Henry David Thoreau (John Mulaney) and Edgar Allan Poe (Nick Kroll). Louisa May Alcott (Zosia Mamet) saying, “I’m just about that hustle,” has become my life mantra. Twin Peaks is known for its music and Dickinson is, too. But instead of moody jazz, they play ASAP Rocky and Lizzo. Those with a dark sense of humor will love the fun and beautifully surreal experience.

Where to watch: AppleTV+