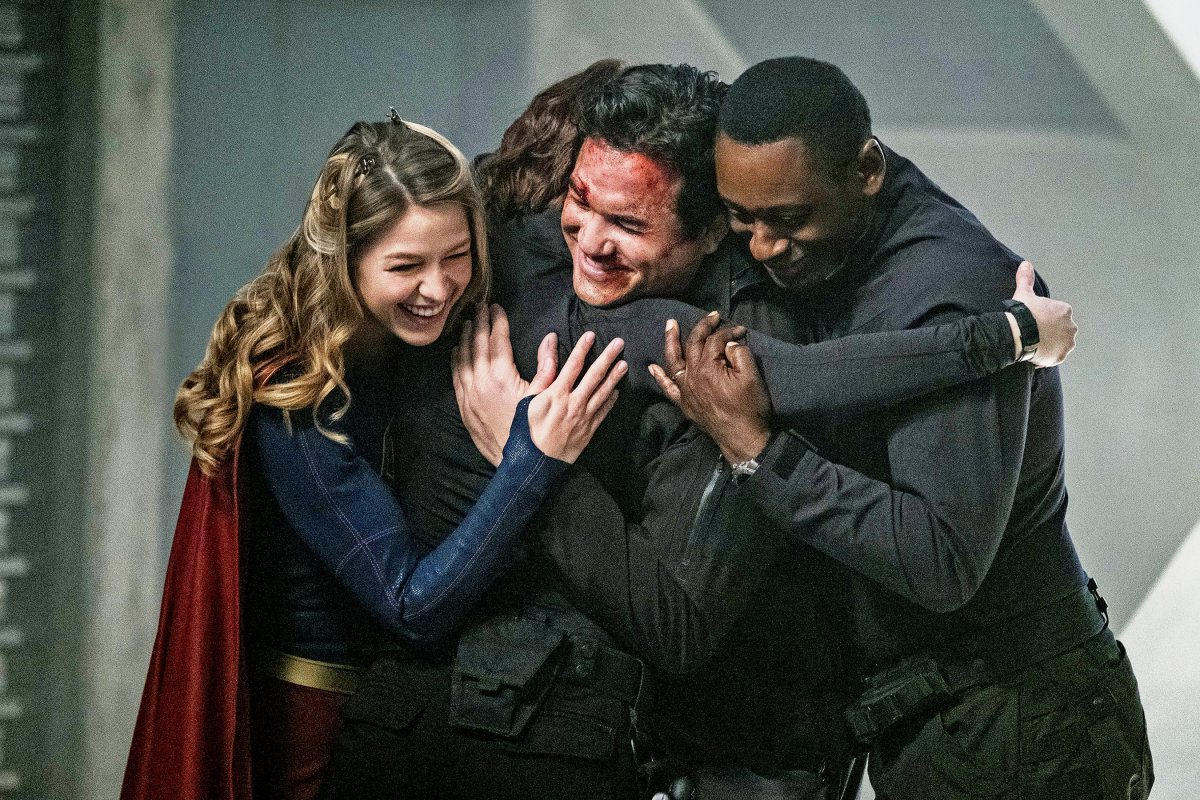 This week’s episode of Supergirl brings back Cadmus (exciting!) and continues to look at the disaster that is Kara and Mon-El.

Mon-El and Kara sitting in a tree

We start with Mon-El waking up in Kara’s bed, with Kara nowhere to be found, and him looking vulnerable. Kara’s TV is on with reports of Supergirl being, well, super just as the day begins. The two share a gushy moment while getting ready for work, and Kara tells Mon-El that she doesn’t want anyone to know about them yet, because she doesn’t want to complicate things. Mon-El agrees and then the minute they step into the DEO he tells everyone.

At the Danvers family reunion dinner Kara and Mon-El get in a fight because he’s suspicious of Jeremiah (rightfully so) and Mon-El refuses to hold his tongue about it. She’s actually mad because Mon-El REFUSES to listen to her and she kicks him out of the party.

Jeremiah escorts Mon-El out and lets him know that he’s read the file Cadmus has on him and know who Mon-El really is/was (a prince probably). Mon-El meets with Winn to tell him his theory about Jeremiah, Winn agrees to help Mon-El with his search for proof, and Mon-El ends up admiring Winn’s relationship with Lyra. He asks him how he manages to have a loving and healthy relationship. Winn advises Mon-El to listen to Kara (duh) and not to try too hard.

After the big fight with Cadmus and her dad, Kara is crying forlornly on her couch when Mon-El stops by. Somehow, he’s learned how to listen and sits down providing a shoulder for her to cry on. Winn interrupts their moment to tell Kara that Jeremiah took the National Alien Registry.

Winn’s Cadmus tracker alerts the team that Cadmus is active and moving cargo. Not wasting any time, Supergirl and Martian Manhunter go after the various Cadmus vehicles and workers, kicking their butts along the way. They open the semi-truck which is believed to have the cargo inside, but the only thing in there is Jeremiah.

Kara and J’onn bring Jeremiah back to the DEO where he has an emotional reunion with both of his daughters. He tells the DEO that Cadmus has a nuclear fusion bomb made from Kara’s heat vision (from episode seven) and they’re going to use it to destroy National City. Mon-El is suspicious of Jeremiah (because obvi) and voices his suspicions to Kara. She writes his feelings off, still caught up in the euphoria of her family reunion.

The Danvers decide to have a family dinner at Kara’s house and everyone (except Winn and James) is invited. At dinner, Jeremiah asks if he can rejoin the DEO and he gets the okay without having to go through a background check.

Winn finds out that Jeremiah broke into the DEO mainframe and tells Kara. Kara questions Jeremiah and he makes up some excuse about catching up on their adventures. Alex is PISSED that Kara believed Mon-El over Jeremiah accusing her of being lost in lust.

Winn finds Supergirl’s heat signature, so Alex, Supergirl and a bunch of DEO agents go to check it out. When they get to the location… nothing is there. Because it’s a trap! J’onn goes after Jeremiah who it turns out is part Cyborg! They fight but Jeremiah gets away with all the DEO information. Luckily, Winn put a tracker on Jeremiah and they find him with Lilian and Cyborg Hank Henshaw. Cyborg Hank blows up so train tracks so Supergirl goes and saves the passengers (didn’t this just happen on The Flash? Yes.) Alex chases after her dad, and questions him, she ends up letting him go, because the other alternative is killing him.

This episode felt a little… messy but I still enjoyed parts of it. I’m excited to have Cadmus back, even if they aren’t as powerful due to their outlaw status. They are a dynamic and high-stakes adversary for Team Supergirl. The writing for Supergirl has improved a lot this season but I still see the show relying heavily on basic television tropes which can make it dull. Jeremiah betraying the DEO and his family right after he got back from being kidnapped for a long time is super obvious (so much so that Mon-El figured it out in the first 10 minutes). I just wish there were more episodes that caught me by surprise, like when we found out Lilian Luthor was the head of Cadmus or that Hank Henshaw is Martian Manhunter. Also, maybe it’s because I hate them together, but Kara and Mon-El’s constant fighting is already emotionally draining, and this is the second episode.