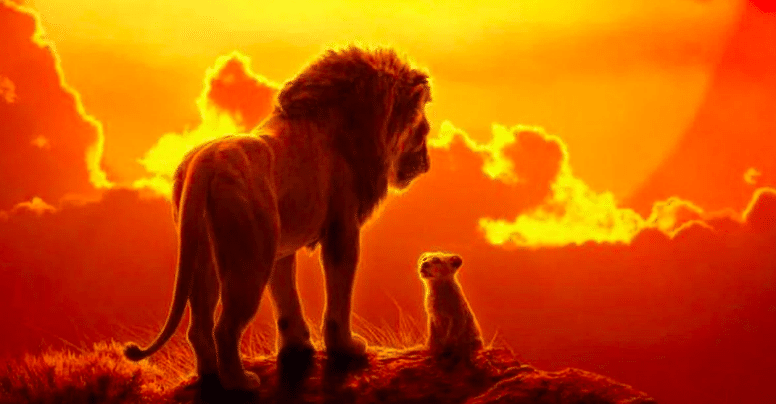 Earlier this year, a teaser trailer for The Lion King was released showing us a sneak peek at a newborn Simba. Today’s trailer illustrates that the new CGI re-imagining of the epic story of Simba is not that new after all. It appears the film will play out very much like the original, which in my opinion, is exactly the way it should be.

There was a couple of notable differences in the new The Lion King trailer, with Chiwetel Ejiofor’s voice featured, Scar doesn’t sound as menacing as he was when voiced by Jeremy Irons. He’s also a bit more scraggly and sickly looking which I think it actually a nice touch to show the stark contrast between Scar and his strong and virile brother Mufasa.

It is interesting we’re seeing some of the darker moments of the movie, which quite frankly are the most memorable ones. Here are six nostalgic moments caught in The Lion King trailer.

When Simba’s father, Mufasa scolds him after the young cub foolishly disobeyed his father’s instructions not to leave the pride lands. Simba simply thought he was trying to be brave like his father. Mufasa tells his son that “being brave doesn’t mean you go looking for trouble”.

When Scar tells Simba to Run Away and Never Return

In The Lion King trailer, this moment plays as a voiceover for scar as we hear him say the memorable words “Go away and never return”. This was a pivotal moment in the film since it ultimately led to Simba leaving the pride lands as a young cub and he didn’t return until he became an adult. In his time away from home, he happens to meet a couple of friends along the way.

This is the anchor scene that transitions Simba’s life as a cub, to a teen and later to an adult. It shows that Simba has spent a significant part of his life in close proximity to his new besties Timon and Pumbaa, who are loyal and friendship is impenetrable. This is also a notable scene because it plays during one of the many musical numbers in the story — my personal favorite — “Hakuna Matata”

When Simba Meets Nala Again as an Adult

Nala, the childhood friend of Simba, and later to be the mother of his son, sees Simba again when she is starved looking for food and wanders outside of the pride lands.  The two reconnect as you hear the award-winning song “Can You Feel The Love Tonight” playing in the background.

Scar Ruling Over the Female Pride During the Aftermath

Scar is now the king of Pride Rock and the pride lands are now a wasteland. He rules with an iron fist and the only lions left are the women who are left to starve.

This is yet another climactic moment in The Lion King — shortly after Rafiki discovers Simba is alive — the illustrated image of Simba on a tree is now colored with a mane to represent that Simba is not only alive but a fully grown King.

The Lion King premieres in theaters nationwide July 19th. If you haven’t caught the new trailer, check it out below.