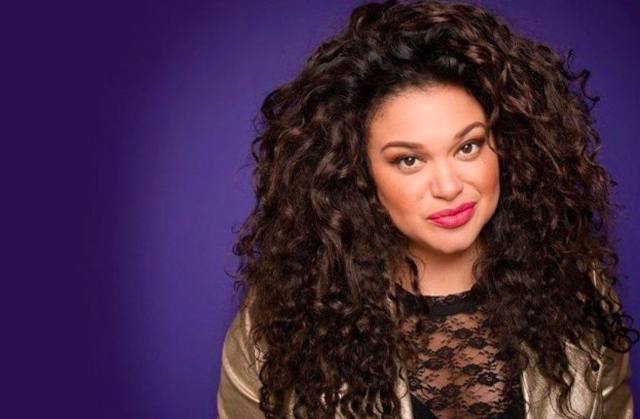 Written by Pella the Pilgrim

I had just finished binge-watching the BET+ series First Wives Club when I was tapped to review Survival of the Thickest by Michelle Buteau. I enjoyed her performance as Bree Washington in First Wives Club. I knew her name, though I had only seen her in small roles of other shows and movies. But Buteau has a charisma that makes you remember who she is. I have seen her in a lot more productions lately and I was really excited to see her in something where she has a whole story arc. Just like Issa Rae, I root for everyone Black. I hope that Michelle Buteau is about to be as ubiquitous as Melissa McCarthy (when you read the book, you’ll find Buteau has the same wish for herself).

Survival of the Thickest is a memoir of moments that shaped Buteau on her journey. She shares with us her experiences from growing up an only child to strong-character Caribbean parents in New Jersey to finding her place on stage. In the memoir she shares how having to edit the news footage of 9/11 was the impetus for her to pursue her passion. She did her first stand-up three days later. While I hope that Buteau’s star only gets brighter, this book is a testament that to be an “overnight success” takes about 20 years.

I am not well versed in the comedy world, so I mostly knew Buteau from her acting credits. In the book, Buteau makes it blatantly clear that she is a comedienne. The girl (woman) is funny. I mean genuinely funny. I caught myself laughing out loud several times. I even caught curious I side eye from my roommates from all the abrupt laughter I did.

Her story is told very much in the way her characters have been played. If you’ve ever seen her perform, then you know what I mean. And I can only assume that this is genuinely who she is.

The tone of the book felt very conversational, as though Buteau was really talking to me. She is such a great writer that reading the book felt like I was hanging out with my funny friend. I pulled out a nice glass of wine while I read and laughed. When I finished, I felt like we had just had a long catch-up.

Did you know that Buteau’s uncle is the archbishop of Jamaica? Well if you didn’t know, you will know by the end of the book. Buteau culturally identifies as Catholic. It might throw you for a loop to find that out if you’ve read some of the things she mentions in the book. She acknowledges the conflicts of her navigating the separate worlds. It speaks to the complexity in all of us. We can be two things at once. In Buteau’s case, it’s being an unapologetic sex positive feminist and also being staunchly Catholic.

I really loved Buteau’s honesty in the romance department as well. Since she has been married for ten years, her notoriety is a bit more recent. She could easily gloss over all the frogs that she kissed before finding her happily-ever-after, but what fun would that be?

Buteau spills the tea with hilarious details of her experiences in dating in the 1990s and 2000s. From her first romance in high school to her grown and sexy days in Miami and New York, she shares her dating highs and lows. She unashamedly tells of mishaps that could easily be scenes from a Judd Apatow comedy. In true rom-com fashion, the meet-cute with her now husband was a supposed to be one-night stand.

Every good comic knows how to read the room, and Buteau was able to do that. She was able to find the humor in a lot of situations in the memoir. When she covered more serious events that she has experienced, she handled it with the appropriate amount of care. From her bubbly personality and confident demeanor, you might not know some of the things she has encountered in her life.

Buteau takes in stride living with a benign tumor on her brain. Somehow she was able to convey the seriousness of the condition without it being a pity party. She spoke on her emotionally tolling fertility journey that eventually led to her twins via surrogacy. That portion of the book was especially honest. She shows a vulnerable side to herself. Buteau also has several anecdotes about experiencing racism.

Buteau is a light-skinned/racially ambiguous woman. (I don’t feel bad about saying this because she makes several jokes about it in the book. She did it, so I can do it too, right?) It would be easy for her to distance herself from her Blackness with her loose curls and freckles. But, she doesn’t. From the very beginning of the book, Buteau shares her lineage as being born to mixed-race parents. What I really appreciated as a brown skin girl is that Buteau took it a step further to address colorism. She tells us repeatedly that though she is from Jersey, she identifies heavily with the Caribbean (her mother is Jamaican and her father is Haitian). It’s not a question as to how she identifies herself.

There are some real gems under humor, but I guess that’s why the saying goes, “It’s funny because it’s true.” Buteau also shares the growing pains of losing and outgrowing friends, finding her footing in the comedy world, and even being comfortable in your own skin. A quote from the book sums it up best: “I decided to take the shame out of my most awkward situations/times in my life and embrace the f*** out of them.”

It’s funny that it felt like a conversation because I definitely walked away without having contributed anything but my laughter. Buteau took opportunities to share her past experiences, added humor, and parlayed that into advice. There were a bunch of punchlines that will undoubtedly go over some younger Millennials and Zoomers heads. As a young(er) Millennial myself, I had to google some of her refences. But don’t feel bad if you have to, too. Buteau already anticipated this and actually has a few jibes about it. Even if you don’t get all of the references, I would recommend Survival of the Thickest to anyone who is looking for  good laugh.

Survival of the Thickest is available from Simon and Schuster, Dec. 8, 2020.

‘Always Be My Maybe’ Cast Interviews With No Keanu Spoilers!