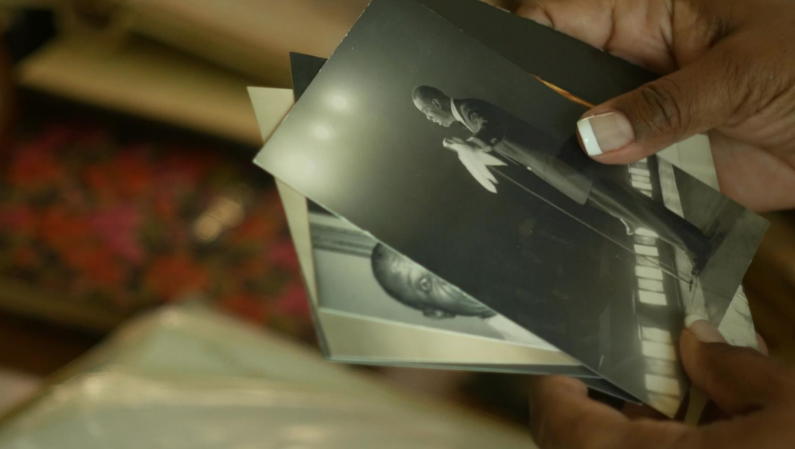 “My name is Sharon Preston-Folta, and I am Louis Armstrong’s daughter, his only child. I have waited my entire lifetime to say that publicly, out loud. Because up until this very moment, I wasn’t allowed to admit to anyone other than my closest family and friends that the blood of a legend runs through my veins.” Little Satchmo is a sad revelation of the hidden lives of single mother Lucille Preston and her daughter, Sharon Preston-Folta.

Nicknamed “Satchmo” (satchel mouth) because of his large mouth, Louis Armstrong, who was born and raised in poverty, saw music as his refuge and his gateway to a better life. He had many lovers. One of his favorite long-term paramours was Lucille “Sweets” Preston, a performing artist from Harlem.

Preston-Folta reveals her mother’s first love was dance. As a child, Lucille would practice dance routines in her bedroom for hours pretending she was a chorus girl, and, by 1940, she realized her dream. Now known as Sweets, she danced in many of the top Harlem nightclubs and went on tour. She met, fell in love with, and married Luther “Slim” Preston while working on the road. He was a beautiful dancer who was tall and talented. The couple worked together on The Chitlin Circuit as a duo called Slim and Sweets and opened for the most popular Black entertainers of the time, Billie Holiday, Count Basie, and Louis Armstrong. Preston-Folta pulls no punches when it comes to describing her father’s way of life. “My father kept a stable of sweethearts: four wives, countless one-nighters, and numerous women who enjoyed his largesse.”

Louis Armstrong loved Slim and Sweets, and they all became dear friends. Preston-Folta states that it was during this time that her mother fell in love with Armstrong, but she never acted upon her feelings for him while she was married to Slim. When Luther Preston passed away in 1950, the entire Black entertainment industry showed up to support her and grieved the loss. After Slim’s funeral, Armstrong told Preston he “was supposed to take care of her.” This was the beginning of their 20-year-long love affair.

Preston-Folta narrates Little Satchmo, and the film is strongest in the moments where the camera catches her describing the real-life circumstances behind the black-and-white photos of her mother and father and when she plays her father’s tape-recorded promises of care and proclamations of love to Sweets. The documentary gives us an in-depth description of the transactional relationship between Armstrong, his mistress, and their daughter. For 20 years, Sweets lived with the hope that Armstrong would divorce his wife, marry her, and publicly embrace their family. It’s stunning to see the lengths that sweet-talking Armstrong took to keep his lover believing that someday they would be together as a family.

Little Satchmo takes the audience on an in-depth journey into what it’s like to live as invisible in full view. It’s not pretty, and it’s heartbreaking to see the negative impact on a girl of not being recognized by her father. Even though Armstrong provided full financial support to his mistress and child, the money was not enough. Preston-Folta points out that her mother’s only job was to take care of her. The money her father sent them provided a comfortable middle-class lifestyle that gave Preston-Folta many privileges her peers did not have access to, but the comfort that financial security provided did not make them happy.

John Alexander’s direction is proficient, and the narrative is clear but redundant. Little Satchmo has a run time of 60 minutes, but it seemed to last much longer. The documentary tells the story in broad strokes and lacks the nuance and complexity that exist in a 20-year-affair that bore a secret child. I loved hearing about Lucille Preston’s career as a dancer and her relationship with her husband and wished more time could have been focused on their relationship.

The editing is excellent. It’s impressive seeing the impact of Armstrong’s life on American culture in newsreels, films, and newspaper clippings. It’s notable that Armstrong chose not only to write letters to Sweets but to take the time to do tape-recorded letters that share the rich quality of his voice. If you listen closely, you’re able to hear the conflicting emotions in his voice as he lies to his lover, telling her he will someday leave his wife, marry her, and make them a family. Little Satchmo attempts to leave the audience with a feeling of hope, but I ended up just feeling sad and angry at yet another famous man with a dual identity who created long-term suffering for the women who dared to just love him.