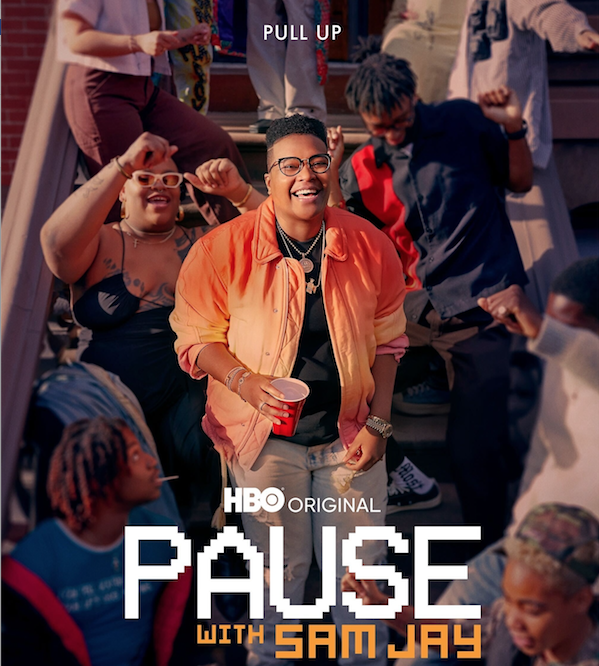 If, after viewing the first episode of the second season of PAUSE with Sam Jay, you find yourself thinking, “That show was really gay,” the series has done its job.

PAUSE works because its formatting is also a bit queered up. This is most certainly a deliberate choice. The series’ website calls PAUSE a “new take on the late-night talk show format,” but that feels like an elevator pitch version of what’s really happening here. To say it’s a “new take” on the format might imply some simple tweaks here and there.

Rather than opening with a monologue, say, the host might start with a sketch. Or, instead of having a single guest on at a time, the show might have multiple and do a roundtable discussion akin to Bill Maher’s old show Politically Incorrect. What PAUSE does, however, is actually more interesting.

The show opens with a candid discussion between Sam and her friends. The friend group is largely made up of Black women and AFAB (Assigned Female At Birth) persons of various orientations, and one straight Black dude who I feel comfortable assuming his gender/orientation because he makes points similar to every barbequing uncle I’ve ever had.

They discuss Blackness, queerness, straightness, and how these identity kits intersect and/or interact. Sam asks one friend how she gets her straight friends to hang around her gay friends. “I don’t,” she says, “Straight people don’t really like gay spaces.”

From here, the conversation — shot with a camcorder filter that feels a bit too precious, like it’s underlining the realness and directness of these talks — is interwoven with other interviews, making the section end up lasting the length of the episode.

This formatting is perhaps one of the reasons PAUSE is so interesting.

Of course, its frank discussions of identity, intersectionality, Blackness, and queerness sometimes feel in opposition to one another are the reasons to watch. But the structuring plays a hand in making it compelling. Just when a conversation is beginning to get in-depth and very personal, we move to a new interview or, near the end, a sketch. This is not to say the editing is bad. It’s, in fact, quite the opposite.

We never feel that a section, except, maybe, the final sketch, is dragging. What we’re given instead is the perfect application of the editing adage “start too late and end too early.” I desperately want to hear more when a group of largely queer Black women discuss their first experiences at (predominately white) gay clubs. Did they, like half of the group, think “They’re wild”? Or, like the other half, “They’re free”?

When the afformentioned uncle surrogate begins talking about, “It’s not homophobic because I’m not scared of anything,” I want to be in the room and watch him hold this goofy belief in the face of overwhelming opposition to his points. And, of course, PAUSE never positions us to hate this man.

Some of us, sure, might. But others of us, who do have otherwise loving family members with pernicious beliefs about gayness, queer identity, and “the gay agenda,” might have sympathy for him. Others may even have empathy, because we or others close to us have had to unlearn those prejudices. In that way, PAUSE is just as much, if not more so, about Black love as it is queer love.

We watch Sam in various settings wrestle with the idea of being Black first and queer second and what it’s like having to choose that ranking system.

In her interview with Renna, Sam asks if there is a sense of predominating whiteness when people talk about gay culture. Renna concedes that this may be the case, and she agrees with Sam that there should be room for Subaru Gays and Houston-Strip-Club-Attending Studs at Pride.

Sam wonders if it is possible for national queer groups like Renna’s to reach Black people that aren’t just the churchy choir-group kind. The one’s more like “the n***** that fight in the clubs in Atlanta” (Sam’s words, not mine) kind. In the end, the episode ends up being about what Sam calls “N****sectionality,” or, “a multifaceted connection between gay n***** of all regions, counties, and zip codes working to uplift real n***** in queer spaces.” You know, a space for gay choir n***** and gay Atlanta n***** together.

This first episode of PAUSE with Sam Jay’s season two has me excited. Though I found the sketch about a naked basketball game mildly amusing and then overly long, I respected that its basis was a conversation about a purported game of nude basketball Jamie Foxx hosted at his mansion and how straight men do “gay things” all the time.

Structurally, the format keeps PAUSE interesting, even engrossing. We always want to know more, and if the show were simply Sam talking with her friends, that might also be fine for me. Sam Jay is funny, brash, and talks about her contradictory feelings in an arresting way. We want to know more about how she feels, how her Black femme friends feel, and even how Barbeque Uncle yo feels. It’s an empathetic, funny show asking tough questions. Basically, it’s Dave Chappelle without the misogynoir and transphobia.