In its purest form, art is about taking an idea and converting it to a medium that conveys that idea.

The artist works in whatever medium they are most comfortable in, and that result may, in turn, spawn escalation of that idea into other forms through other mediums.

You see this a lot in music, where the classical genre is used to create an iconic rock masterpiece like Queen’s Bohemian Rhapsody, Elvis’ interpretation of Chuck Berry or the myriad of rap artists that have sampled icons like Marvin Gaye or Stevie Wonder.  When it comes to novels, the writer typically has only the words to craft an idea.  Good comics involve the careful balance of storytelling in two dimensions, while movies take us into the third dimension by adding movement and intonation, and Marvel has done a fine job over the last decade telling a myriad of stories leading up to the creation and later destruction of the Infinity Gauntlet. 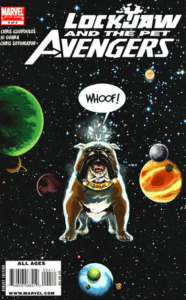 With the last movie Avengers: Endgame, the Marvel Cinematic Universe takes a huge step towards the comic universe.  Like any producer taking up a legacy like this, there are several forcing functions, including the studio, the creators, the comic book fans, and the in-the-closet-geeks who like capes, but won’t admit it.  From speaking to those on both sides of superhero fandom, I was surprised to hear some of the lawnmower brethren border on blaspheming Avengers: Endgame, while many of their husbands/wives were those irritating folks who cried loudly through a good part of the 3-hour movie.  Then it dawned on me, some of those moments of joy that we comic universe fans cheered for, went completely over some folks’ heads.  To that end, we here at BGN thought that we would provide some context to some of the easter eggs provided for the comic geeks of all ages in order to explain why some of us were screaming like Marla Gibbs doing a cameo on the live version of The Jeffersons when certain events occurred.  Here are three big of the bigger ones:

Over the last three years, the character of Captain America has taken a beating. But before that in issue #25 of Captain America (2014), the fanboys erupted in what was seen by some as racist rants, as Sam Wilson assumed the mantle.  Of course, that was not even the first time that Sam Wilson, much less someone other than Steve Rogers had donned the tights and flung the shield as in issue #7 of Civil War. Cap was assassinated, and the mantle was offered to Hawkeye, who declines, which seems appropriate as we are well aware Hawkeye was a bit of a scoundrel. Then, of course, Bucky Barnes took up the shied in issue #34 of Captain America (2008).  Many others wore the suit and/or donned the shield over the years, but in the end, the mantle has seemingly always returned to Steve Rogers. 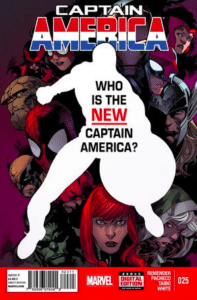 The most recent scandal was the reveal that Captain America had actually been a Hydra protégé and trained for years, something along the lines of Black Widow, to infiltrate and take over the world as he did in the first issue of Marvel’s 2016 series Captain America: Steve Rogers.  Of course, the offense of Captain America being anyway remotely tied to the Nazi-leaning Hydra drew outrage “on both sides” and the character’s good name was restored when it was revealed that Steve Rogers had been split and safeguarded away by Kubik the Cosmic Cube.  This is good as how could Cap wield Mjolnir (Thor’s original) hammer if he was not worthy, even though he did while he was Nazi Cap?  Which leads us to Thor’s cinematic universe hammers, Mjolnir and Stormbreaker.

The seed for Thor’s doubt of his worthiness was explored in the first Thor movie, allegedly resolved, but played within Avenger’s: Age of Ultron when at a party the various male Avengers were all trying to lift Thor’s hammer, Mjolnir.  No one could even budge it except for Captain America who barely and almost imperceptibly wiggled it.  So, the joy of seeing Cap summon the pain on Thanos during Infinity War with Mjolnir also had you want to jump out of your seat.   In the comic universe, Captain America, at the time going by the moniker The Captain, hefts Mjolnir skyward in the fight against Egyptian god Seth and his lieutenant Grog, the god destroyer in issue #390 of Thor (1988).

Back to the movie, the only way that scene could have only been better was if the last wielder of Mjolnir in the comic universe, Jane Foster, had summoned the lightning, which occurred in issue #25 of Thor: God of Thunder.  The mantle was transferred upon Thor Odinson’s loss of confidence in himself when none other than Nick Fury whispers something that shakes Odinson to his core, leaving Mjolnir on the surface of the moon, which allows the mantle of Thor to pass to Foster (see Issue #7 of Original Sin).

Then there is Stormbreaker, which in the cinematic universe was created by the Eitri, last dwarf on Nidavellir after Mjolnir was destroyed by his sister Hela in Thor: Ragnarok.  In comicality (I know it is not a word), the real Mjolnir was destroyed by Jane Foster in issue #705 of Thor (2018), when she threw it into the sun attached to Mangog.  In the comic universe, Stormbreaker, on the other hand, was originally crafted for Beta Ray Bill in issue 337 of Thor (1993), and awarded to him/it by Odin after he/it spared Thor’s life after besting him in a duel.  But the real power rests with the Infinity Stones and the gauntlet required to wield them.

Wielders of the Infinity Gauntlet

The folks at Marvel used 22 movies to lay the foundation for the epic conclusion in Avengers: Endgame. Through each movie, comic nerds noted all the little differences some good and some bad.  It seems like the writers pivot-charted the interactions of all the cinematic Avengers in the comic universe and did the best they could to push the universes together.

The executive producers of the latest Star Trek and Star Wars franchises have attempted this to varying degrees.  The reason it feels like Marvel was actually successful was that it was done ever so subtly in the previous movies and even more so in Avengers: Endgame, with a jab about Captain Marvel’s haircut here, a huge moment there as Captain America lifts Mjolnir, or less subtle with the devolving of Hawkeye into Ronin.  Regardless, they pulled it off.  Marvel made an adaptation that had the comic nerds howling with glee, and normal folks in total amazement at the sheer magnificence of it all.   Regardless of which group you fall into Avengers: Endgame was epic.  Keep your eyes peeled, in the near future BGN, will take a look at more movie moments that made us smirk in the movie and more interestingly are making our comic book collections jump in value.

E.Angel is an engineer and holds a BS in electrical engineering from North Carolina A&T State University.  In her spare time, she works at her comic book store – Brainstorm Comics and Gaming – when she is not writing.  She’s a real nerd who loves all things Star Wars and Star Trek, and is an avid gamer. E.Angel can be reached at e9of10@gmail.com or on either game platform as Bunnehs Sister.

‘Avengers: Endgame’ Trailer – “Some People Move On, But Not Us”